Icky! Sticky! Gicky! As long as there are kids in the world (especially boys), gross toys will never go out of style. From the venerable fake vomit, to the latest real owl puke, gross toys just get grosser. TDmonthly Magazine did a gut check and waded into the sea of grossness, talking to over 30 retailers, to find the most disgusting toys out there.

Totally Gross — The Game of Science by UNIVERSITY GAMES

Did you know that snot keeps your lungs clean? Or that some bullfrogs are cannibals? Learn this and more as you travel around the game board answering queasy questions. Land on a Gross-Out space, and you may have to check another player for toe jam or describe the last time you threw up! Every time you answer a question or complete a Gross-Out, stretch your slime on the score line. Stretch it to 10 and complete a Lab Experiment to win the game! A dose of gross helps science make sense. Includes a game board, 110 Question cards, 50 Gross-Out cards, 30 Lab cards, a die and a jar of slime. For 2 to 4 players.
— “This is one disgusting game,” commented Dolores Hopson, assistant manager of the Barnes & Noble in Macon, Ga. “Kids love it, and even the parents like it.”
— It was rated the No. 1 gross toy on Amazon.com for the week of October 16, 2005.
— Silly Goose Toy Store owner Diane Ross said this game sells “extremely well” and has since it first came in. 10/27/2005 (MSRP: $29.99; Age: 8 and Up)

Gross Magic by FIRST FOR MAGIC

This is a collection of the most revolting tricks you can buy. Pull brown slime from an empty toilet, clean a snotty rag with the flick of a wrist, or magically fill an empty trashcan with garbage. That not gross enough? Why not try the Liquidize Eyeballs Into Red Slime Trick, "hatch" cockroaches´ eggs or create green slime. It all guarantees horrified hilarity from your audience. Includes 24-page illustrated comics-style booklet that explains dozens of tricks.
— Steve, co-owner of Grandparents Toy Village, thought this is “the most original magic kit to come along in awhile. That’s why we chose it for Grandparents Toy Village.”
— Gross Magic is the top selling magic kit in the U.K., according to Gameley’s World of Toys’ Spencer Ratillion.
— Likewise at Commissary Toys of Jackson, Miss., said CeCe Toshaba, manager: “Kids like magic. Kids like the gross stuff. Kids really like Gross Magic.”  10/27/2005 (MSRP: $29.89; Age: 8 and Up)

What is a Giant Microbe? These plush dolls look like common microbes — only a million times their actual sizes! From ulcers to Ebola, they’re humorous, educational and quite contagious. Each 5- to 7-inch microbe doll comes with an image and information about the microbe it represents. These germs of endearment are better than a get-well card for a sick friend.
— Dave, founder and head of Sillyasstoys, Richmond, Va., thought the Giant Microbe plush toys are the coolest things around. “They’re one of our biggest sellers.”
— “Kids love them and so do teachers. We sell a lot to schools. They make biology fun and cuddly,” explained Susan Richards, manager for Educational Innovations Inc., Norwalk, Conn.
— Michael Stipe, lead singer of REM, even got some of these at Kawaii Gifts in Pittsburgh, Penn. (of all places). 10/27/2005 (MSRP: $8.95; Age: 3 and Up)

Owl Puke: The Book, by Jane Hammerslough, is a kit that contains everything kids need to learn about the wonderful world of owl puke. Owls eat small rodents and then throw-up the indigestible parts in a fuzzy pellet. With the guidebook in hand, kids can inspect the professionally collected and heat-sterilized pellet for the bones of the animals that the owl has eaten. A plastic sorting tray is also included. It’s a great science experiment and very gross.
— Kathy Uhtoff, co-founder of the Northwest Nature Shop in Ashland, Ore., thought this book was “very creative. It’s educational, fun and disgusting. Kids like it, and even some university professors use it in their classes.”
— Seattle Audubon Society’s Nature Shop’s Chuck Wosselly (a volunteer at the store), said that “kids really go for the owl puke. Well, at least the boys. The girls are a little more squeamish.” 10/27/2005 (MSRP: $14.95; Age: 8 and Up)

It’s the only lab kit that allows kids to cut open Frankenstein, remove his gooey organs, and view them under a microscope! With a mad scientist-style “viewing station,” kids with strong stomachs get an “experiment”-ready Frankenstein with chest opening and multiple monster organs. It includes a kid-friendly tweezers and scalpel.
— Sally Jenkins, assistant manager at the Toys “R” Us in Orlando, Fla., said that “little boys love this kit. It’s very gross, and after they saw the movie, they knew the Van Helsing name and wanted to play with this.”
— It was in the top-10 play sets on Amazon.com for seven weeks running (starting the week of August 28th).
— Also available is Dracula’s Pigmy Pod with pigmy bat, so kids can add to their collection.  10/27/2005 (MSRP: $19.99; Age: 8 and Up)

A great gift for the inquisitive kid who’s not squeamish. Kids grow their own friendly germs and fuzzy molds and can even mix up a batch of coagulating fake blood. If they really want to, they can make a stinky intestine. No matter what, they learn the science behind unmentionable bodily functions while doing some truly nasty experiments.
— Sandra Tollinger, salesperson at Growing Tree Toys, State College, Penn., said that the Disgusting Science kit is one of their best sellers. “Boys really like it.”
— The owner of Cheeky Monkey Toys in Menlo Park, Calif., pointed out that the “Scientific Explorer Kits are the best selling toy for 9 to 12 year old boys.”
— “The Scientific Explorer kits are great sellers for me,” explained Jeff Boss, owner and president of Brain Builders, Moorepark, Calif. 10/27/2005 (MSRP: $15.95; Age: 8 and Up) 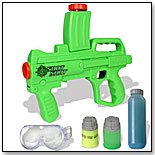 The Snot Shot is easier, cleaner and safer than picking your nose and flicking. Non-toxic "snot" ammo shoots from over 40' away, blasting unsuspecting toys, trees or friends. Snot is slimy and gross but it doesn’t hurt and it’s actually harmless water-soluble goop. The set includes one rapid-fire Snot Shot Blaster, one bottle of brightly colored Snot Shot (100 shots) and one pair of safety goggles. It’s recommended for outdoor use.
— A salesperson at Spilsbury of Aurora, Ill., Mike, said that the Snot Shot was a good seller all year round.
— This toy is repeatedly sold out on Amazon.com.
— It includes one bonus bottle of glow-in-the-dark Snot Shot (150 shots) so kids don’t have to worry about running out. 10/27/2005 (MSRP: $19.99; Age: 8 and Up)

With a character line-up that includes varieties such as “Blue Cheese Charlie,” “Butt Breath Bob,” and “Sweat Sox Sammy,” Stink Blasters by Spin Master are the latest stench in collectible figures. When kids squeeze the head of one of these 24 characters, a brilliantly tasteless odor is released, one which corresponds with the name of each figure. The character designs and expressions are wacky, creative and oddly likeable. Included in each package is a trading card and “Stink Sticker.” Although Stink Blasters may just be the smelliest toy around, they are an otherwise non-offensive way for kids to entertain themselves.
— Collector’s Paradise in Fairfield, N.J. does a brisk business with these little stinkers.
— Tom, a salesperson for Funstore.com, reported the figures are doing well, and believes that they will be great stocking stuffers for Christmas.
— Douglas of Hobbygames Limited, of West Sussex, U.K., ichatted that they are finding the Stink Blasters to sell extremely well, especially to boys between the ages of 7 and 10.
12/3/2004 (MSRP: $4.99; Age: 5 and Up)