What's Selling in the World of Kid Books

Sometimes judging a book by its cover is a good thing ... especially if it’s a picture book.  But TDmonthly Magazine dug a little deeper and asked 23 retailers across the nation what was being read, and keeping them out of the red. Not only are kids reading sooner, they said, but in one store books even outsell science kits. “We sell loads of ‘My Granny’s Purse.’ It’s a cool book, and so is ‘My Grandpa’s Briefcase,’ explained Susan and Mike Castor, owners of Air Fun & Pentwater Toy Box in Pentwater, Mich.

Russ John, Owner of Creatoyvity in Providence, R.I., finds that the “best-selling category is board books.”

Marybeth Kreger, owner of Learning Express in North Kingstown, R.I., pointed to books such as “Dragonology,” “Wizardology” and “Pirateology” as “great interactive books.”

Mary Groak, co-owner of Sundial Bookstore in Lexington, Mass., backs local tomes such as the “'Midnight Ride of Paul Revere,' illustrated by Christopher Bing.”  The Learning Express in Barrington, R.I. also sells “local authors; local moms, dads, if they are in publishing or art.”

Sterling Publishing Co. books sell well for many of the retailers.

Kreger found that carrying books “is a service to our customers, quite frankly.  Customer service is how we differentiate ourselves.”

Sell more at the toy store?  Do it by the book.

Here are some of the books that retailers recommended to TDmonthly readers: 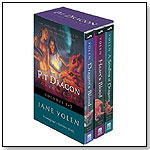 Jane Yolen is the reigning queen of young adult fantasy, and her "Pit Dragon Chronicles" are one of the reasons why.  These are the adventures of young dragon master Jakkin Stewart from his apprenticeship in "Dragon's Blood," to his breathtaking escape with his beloved Akki in "Heart's Blood," and straight through to their harrowing discovery in the third volume, "A Sending of Dragons." 11/7/2006 (MSRP: $20.85; Age: 12 and Up)

My Granny's Purse by WORKMAN PUBLISHING 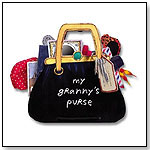 Open Granny's purse (yes, she said it’s OK) and enter a treasure chest of mementos and magic. A unique, 14-page, die-cut storybook crammed with interactive features and surprises for ages 4 and up, it contains a whole life waiting to be discovered. 11/7/2006 (MSRP: $15.95; Age: 4 to 8)

The Very Hungry Caterpillar board book by PHILOMEL BOOKS

This is the classic Eric Carle board book that follows the progress of a hungry little caterpillar as he eats his way through a varied and very large quantity of food until, full at last, he forms a cocoon around himself and goes to sleep.  Die-cut pages illustrate what the caterpillar ate on successive days.  And it opens with the classic line:  “In the light of the moon a little egg lay on a leaf.” 11/7/2006 (MSRP: $10.99; Age: 3 and Up)

For Nancy, there's no such thing as too, too much; she loves her frilly bedroom, her lace-trimmed socks, and her pen with a plume. Nancy teaches her family how to be fancy, too. Then following Nancy's lead, the fancied-up family heads for a festive night out (at the local pizzeria).  A messy food mishap puts a damper on Nancy's joy, but her supportive family and the “I love you” at bedtime smoothes everything out.
- “‘Fancy Nancy’ has done really well — the whole series,” said Merrick Smith, owner of Piccolo Mondo Toys in Portland, Ore.
- “All the ‘Fancy Nancy’ titles have sold for me,” Jeanette Lauture, owner of Aunt Jean’s Toys & Treats in Montclair, N.J., told TDmonthly in November 2008.
- Terri Bracken, owner of Earth Explorer Toys Zionsville, Ind., said, “Fancy Nancy is a new one. Yesterday we sold out so we had to reorder.” Bracken said she reorders the books about every two months. 11/7/2006 (MSRP: $15.99; Age: 4 to 8)

From the people who brought you "Dragonology," "Egyptology" and "Wizardology," this book was “found” in a sunken sea chest off the coast of Newfoundland, a buried journal revealing secret and complete knowledge of the piratical life.  This facsimile of the hidden-in-sea-chest journal from 1723, recording the secrets of famed pirate hunter Captain William Lubber, tells of Lubber’s around-the-world voyage on the trail of the “verminous female pirate” Arabella Drummond.  Special features include a foil-embellished and jewel-encrusted cover with a special surprise feature, an envelope containing Lubber’s letter of marquee, a piece of an aged treasure map and a further foldout map showing Lubber’s route and the locations of pirates around the globe.  There are instructions and string for practicing sailor’s knots, a packet of gold dust, a ransom note, and more. 11/7/2006 (MSRP: $19.99; Age: 6 and Up)

The Miraculous Journey of Edward Tulane by CANDLEWICK PRESS

Newbery Award winner Kate DiCamillo constructs an old-fashioned story about a vain and selfish china rabbit who learns the value (and price) of love.  Bagram Ibatoulline's evocative illustrations add to the wonderful read. 11/7/2006 (MSRP: $18.99; Age: 7 and Up)

I Saw an Ant on the Railroad Track by STERLING PUBLISHING CO.

Written by Joshua Prince with wonderful illustrations by Macky Pamintuan, this is a book about an intrepid ant out in search of a snack who heads into the path of a freight train. It’s up to Jack, the switchman, to save the little bug. Will Jack be able to reach the ant before the ant and train go whack?  Written in a sing-song rhyme that children young and old will love, this book is perfect for story time or bedtime. 11/7/2006 (MSRP: $14.95; Age: 4 to 8)

Your Personal Penguin by WORKMAN PUBLISHING

The irrepressible, ever-original Sandra Boynton introduces a brand new Boynton board book. “Your Personal Penguin” is a read-aloud, listen-along favorite for young children and the grown-ups who read to them. Fun to hold, the book tells the story of a slightly bewildered hippo and the loyal penguin who wants nothing more than to be his pal. 11/30/2006