By TDmonthly Staff
Go back to the main article
Manufacturers: Find out how a TDmonthly Video attracts buyers.

This craft activity kit enables kids and adults to create handmade bag tags, key chains and more. The pack includes an Enchanted Kingdom poster, 32+ traceable images, oodles of Shrinky Dinks plastic, eight color ball chains, and a photo frame keepsake. Shrinky Dinks® is the amazing, shrinking plastic that you draw on, color in, cut out, and bake in the oven to create all kinds of crafty items such as jewelry, bag tags, charms, magnets and ornaments. Launch date: August 2008. Display Ideas: The product is designed to hang or sit on a shelf. 8/27/2008 (MSRP: $14.99; Age: 6 to Adult)

Lariat by JUST JUMP IT

Have lariat fun like the a real cowpoke! Our high-quality lariats are perfect for children and big kids who want to become lasso pros. 13 colors provide the perfect choice for cowboys and cowgirls. Each lariat is made from 20 feet of 5/16” polypropylene blend rope. 5/13/2009

A graceful mother duck and her duckling are the perfect size for little fingers to stack together. Out of the tub, they gently rock together. A modern twist on a classic bath toy. 4/27/2009 (MSRP: $13.00)

Cards with a themed frame on the cover - leaves more room for creativity. Variety includes Birthday, Thank you, Get Well, Congrats, and General Friendship designs. 20 cards per book. (

This cool and educational activity kit teaches kids all about what's inside the body and the body’s major systems: bones and muscles; the heart and circulatory system; the brain and the senses; and the respiratory, digestive and reproductive systems, including pregnancy and birth. The book features a 14-page board book (8½" x 11¼"), a nine-piece human anatomy block puzzle, anatomy trivia cards with 100 challenging questions, a 32-page activity book packed with information and a human skeleton poster. Shipping/Order info: 50 percent discount on 18 units or more. Launch date: March 2007. 5/4/2007 (MSRP: $19.99; Age: 8 and Up)

In this fast-paced word game for two to five players, players trade two-sided letter cards between elegant wood racks, to create words, or steal them from each other. It may be used for family game nights as well as in educational settings. Game play takes 30 to 45 minutes. "PatchWord employs a unique game mechanic using cards with different letters on the inside vs. the outside, which trains logic, memory and sequencing skills, as well as spelling and vocabulary skills," Daniel Weaver, founder of Knightweaver Games, told TDmonthly. This product has won the following awards: 2009 Dr. Toy Best Vacation Children's Products; and 2009 Game of the Year for Educational Word Game from Creative Child Magazine. Launch date: January 29, 2009. (

Kubit2me Lil' Scholars All About Me Bonus Box by KUBIT2ME INC.

Designed to extend play with the Kubit2me Lil’ Scholars game, this box includes 60 All About Me Cards featuring fun and engaging games that help children learn about body parts and emotions, plus 135 reward stickers. Launch date: September 2007. 10/11/2007 (MSRP: $8.99; Age: 3 to 6) 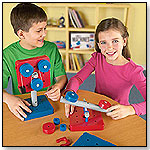 With this 63-piece kit, kids can build all five Simple Machines at the same time. Students can construct, examine, and explain simple machines to develop a deeper understanding of how they make work easier. The set contains enough pieces to build a lever, pulley, inclined plane, wheel and axle, and wedge. Children can modify the machines with four included weights (two 5g and two 10g) and eight included rubber bands to explore effort, force, load, motion and distance. The labeled pieces assemble easily and separate to store. An Activity Guide is included. Launch date: January 31, 2008. 9/19/2008 (MSRP: $36.95; Age: 9 to 12)

Ninety-Nine or Bust™ by LEGENDARY GAMES

A terrific card game that's very addictive for adults and extremely educational for the kids. Played in rounds of adding the card values, this is a very fast and exciting family game that's destined to be a family tradition. Peg packaged identically sized to the Spicy and Classic Farkel games. (

Magnetic MightyMind is ideal for travel and can keep kids busy for hours. The game includes a series of 30 puzzles that increase in difficulty. Some include color cues. Children learn as they place magnetic pieces onto each card, developing independence, self-expression and accomplishment. Launch date: Fall 2007. 3/29/2007 (MSRP: $19.95; Age: 3 to 8)

Konstruk-Tubes allows kids to safely build creations of all shapes and sizes. There are three sizes of tubes to choose from and ten types of easy-fit connectors. All pieces are dishwasher safe and helps kids improve many skills, including problem-solving, hand-eye coordination, color recognition and hand dexterity. This item is featured on Dr. Toy's Summer 2007 Best Products List. Launch date: February 2007. (

In this fast-paced educational game, up to four players draw seven tiles each and begin forming crosswords of numbers so that each grouping adds up to 22. For each 22 that's hit, a player yells "Ku-do" and selects more tiles so he or she always has seven. When the tiles are gone, players add up their points — one point per each 22 and extra points for use of the same number two or three times in the same equation. Tiles with colored numbers may be counted as positive or negative numbers, and players can use the dice to set number goals for the amount of rounds they wish to play. Launch date: February 2009. (

Ideal for trading, this tag is made with a magnet so it can be switched out on a necklace. Many image designs are available, in addition to the line of initials. Launch date: 2009. ( 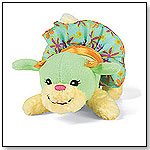 Perfectly playful, the Groovy Girls sensational pets have many lives - in person and online. This sweet 5" long dog is dressed in its party best and comes with an exclusive web-access code to unlock virtual fun and games. (

This launch system features a flex tube that stretches to nearly 3’ and won’t restrict airflow. It only blasts vertically (9 degrees either way), using Metalix™ missiles (three included). The parts store in the base, and the product is also available in Electric Extra Terrestrial Green and Exploding Sun Yellow.
— Two of 66 retailers told TDmonthly in July 2008 that this product is one of their overall best sellers. Five of the 66 named it as a best-selling gift item for boys. Three of 39 retailers listed Blast Pads as their best-selling item for tween boys during an October 2009 survey. “I've been accused of giving them away with how fast I go through them,” Jude Larene, owner of Izilla Toys in Seattle, Wash., said in March 2009.
— “Blast Pads from Marky Sparky were our biggest sellers last year,” Joe Berardoni, owner of Pun’s Toy Shop in Bryn Mawr, Pa., told TDmonthly in spring 2009. Of 47 retailers, two told TDmonthly in June 2009 that Blast Pads top their sales of boys' items, reporting figures of seven to 15 sold per month. "We sell that all year. Every time we get them in we sell out," reported Kim Haynes of Lollipop Toy Store in Dawsonville, Ga., in March 2010.
—‘’We sell at least one per week, sometimes more,’’ said manager Gwen Bowden of Doodlehopper 4 Kids in 1Q 2011.
AWARDS: 2010 TDmonthly Top Seller (

Just the right size for a variety of tiny treasures, jewelry or other extra-special keepsakes, this miniature craft kit from Melissa & Doug comes with four pots of paint, a brush, glitter, white glue, and glittering gems to decorate the lidded, heart-shaped box.
— “It's a party favor. A cute and fun activity,” Linda Rocco, owner of Gummy Lump Toys in Medford, N.Y., told TDmonthly when asked about top-selling activity kits in spring 2009.
— Seven of 49 retailers surveyed in April 2009 listed Melissa & Doug as a top-selling activity brand in their stores.
— Bill Sartain, owner of Tutoring Toy in Salt Lake City, Utah, told TDmonthly in a May 2014 survey that items from the Melissa & Doug "Decorate Your Own..." line are their best-selling activity kits. 5/21/2009 (MSRP: $6.99; Age: 4 and Up)

Expand your Flibbix possibilities with the Flibbix Bridge. A little trapdoor can send players onto a playing level they're not expecting. Launch date: February 2009. (

In this fast-paced card and dice game for the whole family, players take turns as the sushi chef by rolling four sushi dice. Other players then race to match sushi cards in their hand to the sushi that was rolled. The first to do so says "Order up!" and lays down his or her cards. Whoever gets the most sushi cards by the end of the game wins. Players can use Wild Wasabi to help, but must beware the dreaded Stinky Sushi card. "It is easy to play, and the whimsical theme keeps you coming back for another hand," Mike Richie, game developer for Mindtwister USA, told TDmonthly. Launch date: April 2009. ( 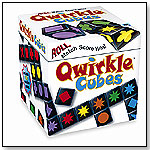 This game expands on the original Qwirkle, challenging two to four players to score points by having the most columns and rows filled with matching shapes and colors. Rolling the cubes adds an element of strategy, as players can attempt to roll for the shapes they need. Launch date: Spring 2009.
— Kate Tanner, owner of Kidstop in Scottsdale, Ariz., named Qwirkle Cubes as one of her overall best sellers in late fall 2009. 2/27/2009 (MSRP: $24.95; Age: 6 and Up)

The challenging number memory game comes with tiles that players need to place end-to-end on the board, matching. The first player to rid himself or herself of all cards wins the game. The game is fun for the whole family. 5/22/2008 (Age: 6 and Up) 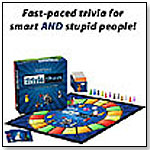 TRIVIATHON... fast-paced trivia for smart AND stupid people! Triviathon will have players singing, dancing, arm wrestling, cheering, cheating, and more as they compete in a game that puts each player's  cognitive, physical, and social skills to the test, while they try to win a race moving at speeds of 0, 1, 2, or 3 spaces based on trivia questions they don’t even have to know the answers to. Made in the USA, this game is designed for 2 to 12 players. Triviathon has received the following awards: Creative Child Magazine’s 2009 Game of the Year; PTPA Media 2009; iParenting Media Award 2009; The National Parenting Center Seal of Approval 2009, NAPPA Honors 2009; and Dr. Toy's 100 Best Children's Products 2009.
— "A trivia game that you can win without having to know the answers.  Now some of us might agree that that is our kind of trivia game.  Super fun and fast paced.  A great choice for family game night.  My own children are going to love this game!!" Jennifer Shuman, of 1SmartNoodle, told TDmonthly at Toy Fair 2010.