TDmonthly recently interviewed 12 retailers about their best selling personalized and keepsake items. The list was dominated by keepsake items, though the customizable Make a Plate Kit from Makit Products made the list too.

See the Top-7 Most-Wanted Personalized and Keepsake items below. 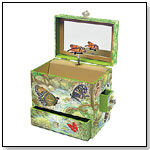 Painted on all sides with colorful butterflies, the Monarch Treasure Box from Enchantmints contains a multitude of places for tiny keepsakes. Jewelry, craft supplies, or any ephemera that has captured a girl's imagination can be tucked into its various drawers and compartments. Closed, the box measures 6” x 4” x 6”. The underside of the lid is mirrored, and when open a delicate Monarch butterfly slowly rotates while music plays.
— Two out of 44 retailers interviewed in September 2010 said jewelry and treasure boxes from Enchantmints are a best-selling keepsake in their stores.
— In an October 2011 survey, Powell Phillips, owner of Phillip's Toy Mart in Nashville, Tenn., told TDmonthly that jewelry boxes from Enchantmints were his best selling keepsake item. 10/28/2010

The Cassie brings plenty of charm to a doll's neighborhood. The second floor has two dormers with gable windows, while the first floor features a transom-lit door and three-over-four windows for well-lit living spaces. An open back makes designing and decorating easy. This superior-quality dollhouse comes as natural, unpainted wood, and is ready to be assembled, shingled and decorated by its owner. Shingles and paint not included in kit. 1:12 scale. Dimensions: 18" x 20.5" x 24" Assembled
— In an October 2011 survey, Robert Lightburn from Cville's Hobbies, Games and Toys in Charlottesville, Va., told TDmonthly that "Collectible doll houses, like Melissa and Doug's House that Jack Built," are their best selling keepsake items. 10/20/2011 (MSRP: $149.99; Age: 8 and Up)

Gem the Deer by TYNIES

Tynies are glass collectibles, introduced in 2008 with 40 different styles. New styles are released three times per year. Each Tynies has a name — each name is three letters. First edition Tynies come on a cardboard base that can be removed by soaking in water for about one minute. Because Tynies are handmade, they vary in color and shape.
— Christine Osborne, co-owner of Wonder Works in Charleston, S.C., told TDmonthly in an October 2011 survey that Tynies are her best selling keepsake item. They sell about 200 per month in each store.
— In a Summer 2012 survey, two out of 10 retailers told TDmonthly Tynies were their best selling collectibles. Elmer Carranza, manager of Doodlehopper 4 Kids in Springfield, Va., told TDmonthly that they sell 8-10 Tynies each month.
— In an August 2013 survey Dean Smith, owner of JaZams in Princeton, N.J., told TDmonthly that Tynies are one of the store's best-selling collectible lines.

Made of comforting fabrics and textures, Gund Comfy Cozy 24" blankets are available in various styles and colors. They feature satin paw pads and are machine washable. A 12" size is also available.
— Gwen Bowden, manager of Doodlehopper 4 Kids in Springfield, Va. told TDmonthly in late Spring 2011 that Comfy Cozies were a best-selling toy in the infant & toddler category.
— Elmer Carranza, assistant manager of Doodlehopper 4 Kids in Falls Church, Va., told TDmonthly in an October 2011 survey that Comfy Cozy blankets are their best selling keepsake item. They sell about a dozen each month.
— Want this? As of 05/06/2011, this product was available for purchase at Doodlehopper 4 Kids. 6/25/2010 (MSRP: $32.00; Age: 0 to 5)

We've teamed up with Strathmore Artist Papers to create a unique place for budding artists to explore their creativity through art journaling. Learn fun doodling, drawing and collage techniques with inspiring materials! Five great colors to choose from, collect them all! Great for all ages.
— Linda Laramy, owner of Crackerjacks in Easton, Md., told TDmonthly in an October 2011 survey that diaries/journals are their best selling personalized or keepsake item. 9/2/2011 (MSRP: $12.95; Age: All Ages)

The Make A Plate® Kits are a great way to capture the imagination of the young artist in a usable product that is dishwasher safe and break resistant. A classroom kit that has enough templates for your child’s classroom or parties, each kit contains 50 drawing templates, 2 packs of markers, one order form, one pre-addressed return envelope, one instruction sheet and one label to expedite your order. Have one plate made or have all 50 made at once. You decide which ones and when, after you’ve created the design. Pay only for processing the artwork that you send to the Magic Factory™. Processing is only $5.95 per plate (CAN $7.95 USD). After all, teachers and families have been making memories and we have been making them special since 1969!
— In an October 2011 survey about best selling personalized and keepsake items, Kim Emigh, manager of e-commerce at Growing Tree Toys in State College, Pa., told TDmonthly that their top selling item is "The Make a Plate kit - hands down!" 4/2/2009 (MSRP: $7.99)