Mustaches, Puppies, and Zippers — oh my!

When TDmonthly Magazine interviewed retailers in late Summer 2012 about their bestselling novelty items, they named an impressively wide variety of products, including fake mustaches, plush puppies, and bracelets made of both braces and zippers! Check out their best sellers below, then decide which items might be a good fit for your store.

The Waboba Surf by WABOBA INC. 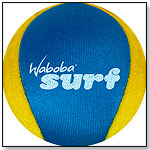 The Waboba Surf "Bounces On The Water".  Softer and smaller, and easier to throw and catch than the original Waboba balls that bounce on the water, the Waboba Surf is an excellent item for the toy industry.  Perfect for the beach, lake, or river.
— Mike Castor, owner of Pentwater Toybox in Pentwater, Mich., told TDmonthly in a late Summer 2012 survey that they sold 200 Waboba Surf balls in three months this Summer. 1/23/2012

Each of the 16 all-new minifigures come in a sealed "mystery" bag, so kids never know which minifigure they might get. And each minifigure has its own special accessories, display plate and collector's leaflet. Series 7 includes: Aztec Warrior, Evil Knight, Galaxy Patrol, Jungle Boy, Viking Woman, Ocean King, Grandma Visitor, Rocker Girl, Tennis Ace, Computer Programmer, Bride, Swimming Champion, Daredevil, Bunny Suit Guy, Hippie and Bagpiper.
— In a Summer 2012 survey, Deran Muckjian, owner of Catch a Falling Star in Lexington, Mass., told TDmonthly that "Lego continually sells really well, across the board, for boy gifts," and that the LEGO minifigures were an overall best seller.
— In a late Summer 2012 survey, two out of 12 retailers said that LEGO minifigures were one of their bestselling novelty items.
— In a July 2013 survey, two out of 12 retailers told TDmonthly that  LEGO minifigs are their best-selling toy. 8/3/2012 (MSRP: $2.99; Age: 3 and Up)

Kids can use one of many push-button settings on this plastic megaphone to alter their voices in different ways. It comes in a variety of colors and requires a 9-volt battery, not included.
— Kevin Pohle, Head Wizard and Owner of The Wizard’s Chest in Denver, finds these to be good sellers, as well as loud.
— Lindsay Demyan, sales associate at White Rabbit Toys in Ann Arbor, Mich., said kids love picking this toy up and marching around her store changing their voices with it.
— “Voice changers are some of the loudest things we have,” explained John Jame, assistant manager at the Los Angeles Toys “R” Us. “They are the greatest for kids of all ages.” 8/23/2005 (MSRP: $14.95; Age: 3 and Up)

HipZips Bracelets are available in a variety of colors. These bracelets actually zip and unzip. Wear alone, or combine colors for a fun look.
— In a late Summer 2012 survey, Charles from Miller's Toys in Mamoroneck, N.Y., told TDmonthly that HipZips bracelets are their bestselling novelty item. "We get them in a 72-pack, and they fly out of the store," he said. 9/4/2012 (MSRP: $3.00; Age: 7 to 14) 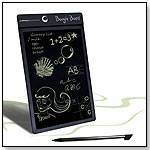 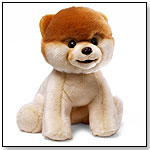 This plush item is based on the real life Boo, a Westminster Dog Show champion who has more than 3 million Facebook fans. Launch date: April 2012.
— In a May 2012 survey, Joe Berardoni, owner of Pun's Toys in Bryn Mawr, Pa., told TDmonthly that "Normally I would tell you a line of plush sells well rather than an item but this past month there has been a standout. We quickly sold out of a dozen of 'Boo' from Gund, the Westminster Dog Show winner. I have more on order."
— Greg Larson, owner of Larson's Toys and Games in Columbus, Ohio, told TDmonthly in a late Summer 2012 survey that Boo from Gund is one of their top-two bestselling novelty items. 2/12/2012 (MSRP: $20.00) 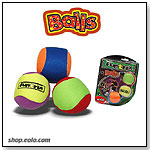 Master the art of 3 object juggling with the colorful and addictive Funtrix Juggling Balls from Eolo Sport. Follow the instructions on the DVD and kids will soon be able to juggle and to execute great tricks. Launch date: March 2012.
— Kim Emigh, VP of e-commerce at Growing Tree Toys in State College, Penn., told TDmonthly in a late Summer 2012 survey that juggling balls were one of their bestselling novelty items. 3/19/2012 (MSRP: $9.99; Age: 6 and Up)