A Miniature World of Fortune

From Waterloo to Gettysburg, the Alamo to Normandy, these and other famous military encounters have long been fought and re-fought in miniatures games. A miniatures game is essentially armies of shrunken metal “action figures,” traditionally 15-28 millimeter tall, sweeping across a tabletop in tactical formations to engage in battle with each other.

The famous science-fiction writer, H.G. Wells ("The Time Machine," "The War of the Worlds"), is credited with "Little Wars," the first published rules for miniatures battle. Since then, countless re-creations of historical skirmishes and campaigns have taken place on the hobby enthusiasts’ kitchen or living room table over the weekends, sometimes involving hundreds of tiny models to a side.

The current leader on the miniatures game field, however, does not cater to the historical crowd. Rather, Games Workshop, headquartered in Nottingham, United Kingdom, has been converting new generation of players since the 1980’s to its science-fiction flagship miniatures game, Warhammer 40,000. GW’s operation is kept successful not only by a devout player base, but the fact that all sanctioned games and tournaments must use products manufactured by Games Workshop — right down to the paint with which you color the models, ensuring the Warhammer 40K fans will not purchase accessories from any competitor. 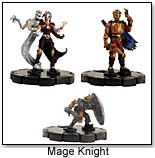 GW’s lead is rapidly closing, though, thanks to an innovation by WizKids LLC in 2000 — Mage Knight: Rebellion, the “collectible” miniatures game. Taking a page from the “trading card game” concept, WizKids packaged its game miniatures in random rarities and made them affordable by switching from expensive metal to plastic, charging $6.99 for four models in a “booster pack,” as compared to double or even tripling that price for the Games Workshop metal figures. Adding to the visual appeal of three-dimensional figures is WizKids’ patent-pending “combat dial,” a rotating disk at the base of each model to record-keep its current status, eliminating the need to track information by model individually on paper!

WizKids has parlayed the collectible miniatures game idea into a multimillion-dollar concept. The super-hero version, HeroClix, uses officially licensed characters from both Marvel and DC comics and has capitalized on the recent successes of super-hero blockbuster movies such as "X-Men" and "Spider-Man 2," as fans young and old scramble to complete their collections, as well as use the figures to stage their own dream match-ups like Superman vs. the Hulk. The company showed estimated revenue of $33 million in 2002, $40 million in 2003, and was acquired by Topps Company Inc. of New York, known for its brand of baseball cards, for $29.5 million in cash in June of 2003.

SportsClix is WizKids’ foray into its new parent company Topps’ familiar territory — baseball. One of the 50 limited-edition of Babe Ruth in a Red Sox uniform was auctioned off in November, 2004 on eBay, with the proceed benefiting the Boys and Girls Club of America, for $1,325.

It just goes to show that big fortunes can come in small packages.