A Niche for Unique Action Figures

By Julia Ann Charpentier
May 2005

When Clark Gray was growing up in the late ‘60s and early ‘70s, G.I. Joe was a big hit. He collected and displayed his figures, but his interest in action figures waned by the time he had reached adulthood. The figures, once prominently displayed, found themselves stashed in a shoebox. Then came eBay, which renewed his collector’s spirit.

“Through eBay I realized that I wasn’t the only person picking them up at garage sales,” Gray remarks. “It was around that time that the G.I. Joe find at a garage sale became a thing of history.”

Today, Gray is the owner of Action Figure World, an online store that he runs from Spicewood, Texas, about an hour from Austin. He utilizes search engine optimization techniques and advertises through pay-per-click ads. Several popular Web sites link to his, keeping his popularity ratings in the main search engines high.

Initially, he operated a small shop in The Fort Worth Stockyards National Historic District in Texas, but his online sales exceeded store sales. The benefits of online retail, he acknowledges, are low overhead and flexibility in operation.

“After about one year, I closed my doors to the public and operated the shop strictly as a warehouse for products that I sold online,” he explains. “When one is so niche-oriented, it is difficult to maintain a large enough customer base with a small shop in one city.”

Around that time, Gray re-located to the Slovak Republic with his family for the year, but found a manager in California to take care of his business. The manager was close enough to the importer to pick up stock at their warehouses, therefore reducing the cost of shipping product to his facility in Fort Worth.

“We managed to keep the online store running through his services while I lived abroad and spent a few hours a week dealing with the business over the Internet,” Gray says. “I resumed this management upon return to the U.S.” 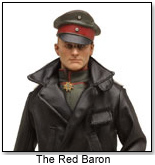 Gray’s clientele is almost exclusively adult collectors and he does little to attract youngsters to his site. Still, he avoids carrying the gory creatures from films and pop culture, favoring instead the 12" figures like the original G.I. Joe while offering larger 1:4 scale figures.

“This is just a reflection of my personal taste,” Gray comments. “I prefer the classic monsters, historical, and military figures over everything else. I find that products with some ‘roots’ tend to have more longevity. This can be a period in history that people find interesting, such as WWI, WWII, or medieval times. 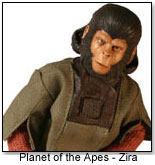 “Unfortunately, some of the bestsellers tend to be the products related to the gory new horror and pop films. They tend to have a very intense, short run of popularity. Historical figures tend to sell slower but for a longer period of time until the product is no longer available. I believe the people buying those products are the long-term collectors.”

The popularity of “Planet of the Apes” figures, for example, is waning even though there was a new movie released in 2001. The success of movie tie-ins depends on the film’s roots. “Star Wars” and “Monty Python” have loyal fans so the figures sell well. Unlicensed general action figures are harder to move but have a longer “shelf life.” He has noticed that figures with articulation that sell for $40 are pushed aside by polystone statues that sell for $150 and up. 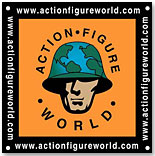 “The historical military collector’s niche is very well established and has been for years,” Gray states. “These collectors stick around long after the pop movies come and go along with their collateral. They tend to be Internet savvy and look for the best price on what they want for their collections. In addition to eBay, there are very active online action figure collector groups such as the newsgroup alt.toys.gi-joe. This is where much of the trading for serious collectors takes place.”

Although Gray sees a trend toward more of the movie and comic-related collectibles, enthusiasts that share his passion for history have cemented his place in the industry.

Gray´s store, Action Figure World, can be accessed at www.actionfigureworld.com