What They'll Want and What They Shan't

Homeschoolers are in your community — in growing numbers — and they’re looking for quality toys to stimulate and teach. (View "Marketing to Homeschoolers" and "Homeschooled Kids Teach Toys How to Play.") According to U.S. Department of Education statistics, there were 1.1 million homeschooling students in the spring of 2003. That represents an estimated increase of 850,000 from 1999, the first year the department started paying attention.[1]

Many homeschooling organizations and curriculums have a Christian focus, but not all. Jim Demetropoulos of Island Treasure Toys in Yarmouth, Maine told TDmonthly Magazine that his store sells toys that meet the criteria of the Waldorf School, an education system founded by German-Austrian educator Rudolph Steiner in the early 20th century. These toys emphasize creativity and are made of organic materials, such as cloth and fabric, rather than plastic and electronic wiring.

Homeschooling used to be an individualized effort, but some homeschooling families are morphing into mini-schools to take advantage of parent/educator specialties, according to Mike Count, United Art and Education store manager in Fort Wayne, Ind. One family will specialize in math, another in the language arts, and the kids will rotate between them, as necessary.

Count told TDmonthly that United Art has offered discounts to homeschoolers in the past. Sometimes they are contacted by a group to request discounts. Count added that the good sellers are science toys in the $10 to $15 range, such as toys that deal with light or magnetism.

Tripp Thornton, vice president of sales and marketing at Talicor Inc. (ToyShow), told TDmonthly, “We are the industry leader” for Christian-themed games. They license several popular characters, including the Veggie Tales gang. A best-seller for Talicor is the Ungame, a board game that provides an opportunity for communication rather than competition.

Brainee Bunch president Matthew Williams told TDmonthly that some of his best-sellers to at-home educators are in the company’s “force and gravity” category, since they teach complicated concepts in a simple way. The Brainee Bunch has made a concerted effort since March of this year to sell to homeschool families but “it’s a tough market to get your hands around,” noted Williams.

He keeps up with some homeschool listserves and chat rooms, plus his company has some advertisements on Web sites. Still, he’s not ready to spend the money on advertising in homeschool publications. 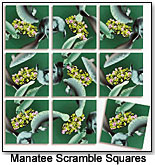 Marshall Gavin of b.dazzle, inc. (ToyShow), however, does exactly that. Gavin advertises his company’s Scramble Squares in The Old Schoolhouse magazine, a publication that serves the homeschooling community (thehomeschoolmagazine.com). He has increased sales by participating in the magazine´s “bouquet” give-aways, where new subscribers can request free samples of products.

Dawn Friedman, a homeschooling mom in Columbus, Ohio, told TDmonthly, “I look for open-ended toys that encourage imaginative play and creative thinking. I look for play value — something that will last longer than a fad.”

Friedman also consults sources such as Dr. Toy. She cautioned that other homeschoolers of her acquaintance pride themselves on being frugal. They shop e-bay and garage sales first, which probably accounts for the popularity of the $10 to $15 price point that Count sees at United Art and Education.

Buyer and seller can meet at home school conventions, an event familiar to many toy retailers. The conventions aren’t very large and it will take some research (but not too much) to get more information. The Internet is a great place to start. Go to Google and plug in “homeschool” and the name of your state. You are guaranteed to get a toe in the door.

[1]Exact statistics on the growing trend are difficult to obtain, as criteria for homeschooling vary from state to state. This may account for the discrepancies between U.S. agencies’ numbers and those provided by organizations that service homeschoolers.

What follows are a few popular homeschooling products: 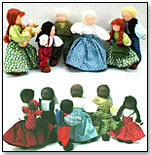 Handmade cloth Waldorf dolls are as soft as pillows and filled with sheep wool or French Lavender, a soothing and relaxing scent. The family is sold as a set.  10/5/2005 (MSRP: $80.00)

The Playstand is made of pine and its uses are endless. It can be used for a puppet theater, a storefront, a make believe kitchen and anything that the child’s imagination can conjure. Put two together and drape a rainbow silk or large cotton cloth to make a fort or a house. 34-1/2" wide x 37-1/2" high. Assembly required.  10/5/2005 (MSRP: $150.00)

Players progress along the playing board as they answer questions such as, “What are the four most important things in your life?” and “What do you think life would be like in 100 years?” This non-competitive game can be a great ice-breaker or a serious exchange of thoughts, feelings and ideas. For two to six players, The Ungame is also available in Christian and Catholic versions. 2/1/2005 (MSRP: $19.95; Age: 5 and Up)

The Revolution Strobe is an antigravity spinning device that appears to be mysteriously floating in air. The strobe’s flashing bright red LEDs create intriguing light patterns around the spinning, levitating spindle. The Revolution Strobe is a kinetic motion toy that is also a great novelty toy for any desk or office. With a good, smooth spin the Revolution Strobe can rotate for several minutes. It’s made of deep hard black and white speckled granite with a black plastic base measuring 5" wide x 2-1/2" high x 3" deep. Instructions are included with the packaging.  10/5/2005 (MSRP: $11.95) 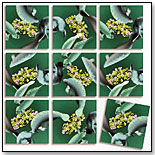