The Story of Box Train Express

Anthony was celebrating his fourth birthday; his mom, Hope Monkewicz, could draw; his dad, Martin, was sales manager of a corrugated box company. Three unrelated facts resulted in the birth of Box Train Express (ToyShow)
, a pretend-play toy company.

When Hope decided to create trains for her son’s party she went to Martin. “I just asked him to bring home a few boxes, but you can’t believe the detail even in those first trains.” Hope was expecting just a few spare boxes but, knowing what she had planned, Martin decided to make them more “train-like” by using cutting equipment at work. “He brought them home arched in the front, with wheels cut out. They were very detailed.”

Each box featured an engine, railroad car or caboose hand-drawn by Hope. Without a top or bottom, the boxes could be “worn” by a child holding it at his or her waist. Parents pleaded to take trains home but after three weeks of drawing, Hope wasn’t ready to part with them — neither were Anthony and little brother Spencer. 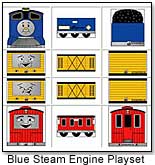 Monkewicz, who had worked in banking for 14 years before becoming a stay-at-home mom, couldn’t forget everyone’s enthusiasm. In July she began designing 11 different train cars, including a steam engine, two boxcars and a caboose. In October, her new company, Box Train Express, released its first Creative Playset, which included a blue steam engine, two box cars and a caboose kit, available in blue, and the Coloring Playset, a black and white version, that allows children to color, decorate and personalize their own train. Each kit includes four corrugated boxes, 18” x 12” x 8” tall. The entire kit, including its carrying case, weighs only 4 lbs. and each car folds flat after play, making them easy to “store in the box under a bed at Grandma’s house or tuck under your arm when the kids get tired at the park,” said Monkewicz. 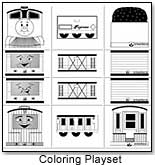 The Monkewicz family can speak from experience about the portability of Box Train Express cars. The boys have worn their trains to the park, the beach, the grocery store, even the hospital during Anthony’s treatment for recent medical problems. Box Train Express is truly a family business: Hope designed the various steam engines to each resemble a different member of her family. The Monkewicz boys help with the word-of-mouth marketing. “We didn’t think they actually understood the idea of the business until we realized that when someone comments on their train the boys answer, ‘www.boxtrainexpress.com.’”

When designing her trains, Monkewicz used fellow parents and their children as her critics. Luckily, when it came to business planning she could turn to Jakki Liberman, a neighbor and founder of Bumkins Finer Baby Products. “I didn’t have any guidance and just bumped along, which is why I have a soft spot for mom-entrepreneurs,” said Liberman. “One good product can’t necessarily support a whole company, so product expansion potential is important.”

Monkewicz seems to agree. In Spring of 2006 the company will be releasing two new Creative Playsets: a green Steam Engine and a pink Princess Train with black-and-white versions for coloring. Future train cars include a red steam engine, two yellow coach cars, two Princess Trains in purple and blue, and black-and-white versions. They won’t be limiting themselves strictly to trains either; other vehicles such as school buses, dump trucks and fire trucks are also in development.

The following is more information on products offered by Box Train Express:

This set includes four “wearable” corrugated box train cars — a steam engine, two box cars and a caboose — that fold flat after play. This playset is black and white so children can color, decorate and personalize their trains. ( 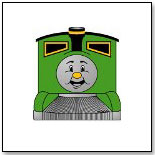 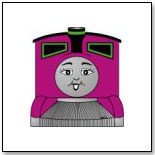 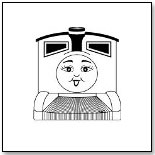 Four “wearable” corrugated box train cars that fold flat after play come in this set that includes a steam engine, two box cars and a caboose. This playset is black and white so children can color, decorate and personalize their train. 12/14/2005 (MSRP: $29.95; Age: 2 and Up)