Watching children construct forts out of boxes and household wares has inspired a number of construction-toy manufacturers. They figured kids and parents would eagerly substitute sturdy, easy-to-store materials for cardboard if given the chance. So far, they have been right.

“They’re weather resistant and kids can play with them in the backyard,” explained FunClubToyz (ToyDirectory) vice-president Lee Madden of the success her company has had selling its corrugated plastic building material, Notbloks. “They’re very lightweight.” 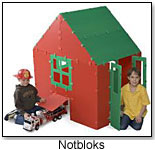 Because of their size, the majority of smaller, independent retailers that can afford to sell large construction toys have entirely online operations, TDmonthly Magazine learned.

Aerobloks (ToyShow) president Dick Liou fashioned his large building blocks out of inflatable material so they could be stored in a small space. While sturdy enough to build an 8- to 10-person igloo, the ability to store them easily is one reason why Misti Norusis, owner of Wishrooms.com, decided to sell Aerobloks.

One Aerobloks buyer, Tracy Heibeck of Lexington, Mass., said she has purchased two sets of the toy — one that she donated to her son’s preschool and one for own children.

Donahue said he and his son, a fort-building fan, “looked around on the market and realized there were no giant construction toys around that were affordable.” Hence Monkeez were born.

Arkitecky (ToyShow), new American-made, hand-crafted construction sets from Arkitecky Toys, are a variety of large; interlinking boards and rounds. CEO JoLe Miller told TDmonthly that the sets, which launched in February 2006, are receiving a good response from rehabilitation centers that work with neurologically-damaged patients.

“It incorporates designing as well as putting little pegs in holes,” Miller explained.

German-made Bauka, a plywood construction system, encourages children to build their own spaces, according to Kristian Raue, one of the inventors.

“The kind of building is only limited by [children’s] fantasy. They can build a new world every day,” Raue said.

Bauka recently released its Starter Kit, which targets families with new babies. The set can be built into a changing table, and then when the baby is older, more pieces can be added to transform the changing table into a castle or playhouse.

Large cardboard building blocks continue to be popular, as well, noted Kathy Lorkovic in marketing for Fat Brain Toys. “They are durable with a simple design proven over generations to be a favorite for any imaginative construction.”

ImagiPLAY (ToyShow), based on Boulder, Colo., produces and sells corrugated cardboard blocks. Cardboard is a good choice for building large structures because it is lightweight, yet strong.

Because of the higher price point for many large construction toys, Christmas seems to be a prime selling time, said Kelley Wiseman, operations manager for Azeche.com, which sells Aerobloks. “It’s not an item we expect to sell a lot of all the time. It’s quite popular, depending on the time of year.”

Below are some construction toys that promise life-sized fun.

What are Toobeez? Think of them like a life-size set of TinkerToys. Toobeez are an open-ended construction system that features a set of colorful tubes and spheres that can be connected to one another in a variety of ways. This allows anyone above the age of 4 to build life-size structures or create almost about anything that can be imagined. With 57 pieces inside of each box one can build many different types of structures, such as forts, castles, playhouses, mazes, obstacle courses, dollhouses, puppet theatres, soccer goals, airplanes, spaceships, or animals. 12/22/2004 (MSRP: $149.99; Age: 4 and Up) 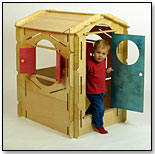 Bauka Jumbo Woodblock Construction Set uses interlocking, lacquered wooden sheets to enable children to build and play inside of their own creations, such as houses, puppet theatres, castles or even locomotives.  12/9/2004 (Age: 3 to 9)