SpongeBob cereal. Jimmy Neutron soup. Star Wars toothbrushes. Life has become one big licensed product. Many of the best selling toys are based on the latest hit movie or the #1 television show. But what about those toys based on something off the beaten track? Do they sell? Are they a good match for specialty stores? You betchum Red Ryder. (That phrase is from the brand that spawned the longest running licensing agreement in history. Can you guess which one?[1]).

Betty Boop, for example, never goes away. She was first introduced in a 1938 cartoon by Max Fleischer (who later introduced that other icon, Popeye). Every couple years brings a resurgence in Boopism. Sababa Toys makes a Betty Boop Uno. NJ Croce makes a bendable figurine. FunKo makes a bobblehead. Urban Station makes an alarm clock. And Celebriducks’ very first duck was … you guessed it: Betty Boop.

“Betty Boop is an icon,” explained Craig Wolfe, owner of Celebriducks. “It is interesting, as we could have picked basically anyone to start the company with about 10 years ago, but we chose Betty.”

Remaining one of the company’s best selling products, Wolfe said her smart, sassy persona attracts all age groups. One of the first female cartoons in history to exhibit depth of character, she is both coy and independent. In a word, Wolfe said, “She is timeless.”

Little Apple Dolls, created by Yurie Urie, are almost the inverse of Betty Boop. Dark to her light, these eerie dolls with faces not fully formed are inspired by Japanese horror classics and dark anime fantasy. They are both monstrous and beautiful. And they are a hot item.

On a more steak and potatoes note, one of the best-selling die-cast licenses is not Porsche, not Ferrari, but … John Deere. All-American farm equipment is great for kids and adults alike. “Kids like the things they know,” Peg Scholtes, owner of Capital Kids LTD in Madison, Wis., pointed out.

Michele Gietz, co-owner of “Where’d You Get That?” added, “The John Deere collection is also coming out with some great stuff for the younger kids — with faces on them, etc. They have a wide range for kids of all ages.”

Bill Walters, managing director of agriculture and off-road replicas for RC2 Corporation, explained that the “John Deere products are selling very well.” This year, RC2 will announce a line of John Deere infant products through its Ertl division, and it will continue to produce die-cast farm-related vehicles as it has done for over 60 years.

Yet Paul Budnitz, Kid Robot’s founder and president, said products will continue to be sold only at the specialty retail level in order to preserve their high quality. “If major chains can deal with that someday, and the high price-point, it could happen on a very limited scale, but I doubt it at this point,” he said of eventually selling into the mass market.

Want to diversify and conquer? Look to licenses off the beaten track. You may find some excellent sellers that stand out from the “seen-it-already” crowd. 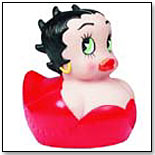 Boop Boop Be … Duck. It's Betty Boop, the cartoon legend, in a lovable rubber duck form. Celebriducks are classic rubber ducks that float and squeak along with the best of ‘em, and they look like celebrities. Cool. This duck is approximately 4" across and intricately hand painted. 5/9/2006 (MSRP: $11.99; Age: All Ages)

These eerie dolls — their faces not fully formed — are designed by Ufuoma Urie and stand around 14” tall. Each comes with a beautiful multilayered fabric costume and its own ‘little apple’ complete with metal pins. These dolls are based on a new mythology that echos the spirit of Japanese Horror Classics and Dark Anime Fantasy. The characters are without key facial features, which renders them both monstrous and beautiful. Series 3 and 4 are now available. 5/3/2006 (MSRP: $26.99; Age: 12 and Up)

John Deere B tractors were 16-horsepower row-crop models introduced in 1935. They were originally available with twin front wheels and later with a wide adjustable front axle — the BW. This 1:16 scale die-cast replicates the full scale design with the functional steering column above the shroud. The see-through engine compartment accurately captures the two-cylinder engine, and the platform features a contour seat. 5/9/2006 (MSRP: $47.95; Age: 3 and Up)

These tiny 3" vinyl dolls resemble workers you would expect to find in Santa´s workshop. The first series of Ice-Bots include 14 different characters. One secret design has yet to be released. The dolls are packaged blind, so the character’s identify is a surprise when the box is opened.

— “Mostly adults buy these,” noted Tory Middlebrooks of Lulubell: A Toy Bodega in Tucson, Ariz. “They’re usually collectors of art toys.”
— Another retailer pointed out that collectors start young. These Bots make a good start.
— The Bots were launched in Summer 2005.
(