This Is No Toy

By Mark Zaslove
September 2006
The dream of hydrogen-powered cars and fuel-cell technology is one of clean air and cheap energy. Horizon Fuel Cell Technologies, a Shanghai-based company, has found a way to start small and build from there with its H-Racer toy  — a fuel cell-driven toy car with its own solar-powered filling station. The car is looking to be a fast seller for Christmas in the science toy market, if what TDmonthly Magazine heard holds true.

Hi-Tech for Kids
“I like things that are techy in my shop,” explained Roger Dillon, owner of Wonderkin in Ogden, Utah. “I just saw this thing, and it looks great. I didn’t know they could do that in a toy.” 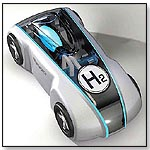 “Public awareness and education are the first steps toward commercialization,” explained Taras Wankewycz, founder and vice president of business development for Horizon. “We wanted to make sure this technology gets adapted globally. Children are the point of entrance. Once it becomes a way of life for them, they accept it easily.”

The Discovery Channel Stores are looking into the H-Racer, according to Sarah Day, a member of their marketing department. “New technology in kid-relatable form — we’re always interested in that.”

The toy's fuel cell is a micro-version of what engineers and scientists have been dreaming about for real cars: hydrogen combining with oxygen to generate a DC current that powers an electric motor. Unlike a gas-powered car engine, the only byproducts of this electrochemical process are electricity, heat and pure water. The hydrogen fuel is supplied by the car’s solar-powered refueling station, which has a back-up battery for cloudy days.

Reaching Beyond Toys
Horizon is not typically in the toy business. Established in 2003 to accelerate the global commercialization of clean, hydrogen fuel-cell power, they are advised by some of the finest fuel-cell scientists in the world, such as Drs. Arthur Koschany and  Robert Hockada. But they realized early on that educating future generations to the “hydrogen way” was necessary to bring about true acceptance for the technology.

“Cleaner, more efficient energy sources are available, but because of the old mind-sets and entrenched business models, they are not being used. We hope to change this, and children are the key.” 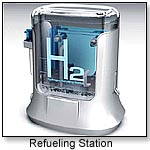 Wankewycz envisions whole neighborhoods powered by hydrogen, where people can stop off at the store and buy or refill their hydrogen canisters, much as one can buy tanks of liquid petroleum gas or propane for stoves and heaters. “The canisters could be used to power scooters or small, electric cars suitable for short jaunts,” Wankewycz said.  “We could be free of fossil fuels on the local level in less than 15 years.”

Horizon’s first foray into the toy realm was a fuel-cell science kit (Thames & Kosmos [ToyShow] have something similar). Now: the H-Racer. “We start on the smaller things until the fuel-cell infrastructure around the world is ready. Besides, it’s a lot of fun.”

Hydrogen powered cars? The future of a cleaner world? “And the children shall lead.”

Witness the power of new energy technology in the palm of a child’s hand. That's right: This car does not need batteries. It uses a real fuel cell and its own on-board hydrogen storage system.  Horizon has created a unique, patented miniature fuel-cell car and hydrogen refueling station. For the first time, hydrogen produced externally can be fueled into an on-board storage tank. Once the car's hydrogen tank is full, the refueling station is disconnected and the car can run on its own hydrogen fuel-cell system, with the simple flip of a switch. The car measures only 6.5” x 2.8”, making this the smallest fuel cell car in the world. Recently nominated for the Intel Environment Award in Silicon Valley's Tech Museum, Horizon's miniature car is about to spread a positive message to a wide audience of children and adults around the world. Fueling station is sold separately for $40.00. 8/1/2006 (MSRP: $40.00; Age: 8 and Up)

The Thames & Kosmos Fuel Cell Car & Experiment Kit provides a playful introduction to one of the most significant technologies of the 21st century. With this kit you can build a model car that actually runs on water! Awards: Parent's Choice Award 2010 12/17/2004 (MSRP: $149.95)

This fuel-cell science kit demonstrates the real possibilities of how hydrogen can be used as a 100 percent clean fuel for cars in the future. The car can steer independently of the user once in operation: When the car hits a barrier, it will automatically find its way by reversing and turning 90 degrees. A user manual makes the car kit easy to construct and operation only requires 2AA batteries and water. Solar panels can also be used and are available as an option. The science kit contains a fuel cell, a car chassis, a small electric motor, two water and gas storage containers, cables, tubes, a plastic syringe and a user manual. 8/1/2006 (MSRP: $69.00; Age: 12 and Up)