By Darryl Morden
January 2007
DVD games are bringing families back together and showing kids there's more to entertainment than a control console. The market continues to grow, delivering a wide array of products for all ages from ScreenLife, SnapTV Games, Imagine Entertainment and others.

These games incorporate elements of old-fashioned board games with on-screen components, updating game night for the modern family.

"We've mixed classic board game fun with new technology," Weinstein added. "And there's a social factor as well: the interaction between parents and children, family and friends.”

"Close to 90 percent of homes have DVD players, so everyone can play our games," said Jason Tenenbown, director of marketing for SnapTV. This is “especially advantageous for adult games, though parents are happy to have a game kids can play in the car on a DVD player.” 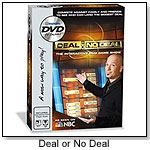 Brighter Minds Media offers two "Brain Quest" series, one for ages 6 to 8 and another for children 8 to 10. Imagination Entertainment’s "Deal or No Deal" has been a hit alongside the popular TV game show, and Imagination International’s “Pirates of the Caribbean” rounds out the eclectic market collection.

Read on for information on these and other DVD games in an ever-growing market:

Scene It? has gone totally “Nick” with this edition featuring SpongeBob, Cosmo and Wanda, Jimmy Neutron and all the Nickelodeon favorites. In the DVD game, friends race around the board as they play with real TV show clips, trivia questions and a ton of on-screen challenges from Avatar, Danny Phantom and more. The set includes fun cards and character pieces. It’s unique because it “incorporates clips from shows currently airing on the Nick network, from SpongeBob Squarepants to Zoey 101,” Nancy Jenkins at Screenlife Games told TDmonthly. Launch date: September 2006. 10/25/2006 (MSRP: $49.95; Age: 8 and Up)

This limited edition game for two or more players has more trivia than ever before and includes film clips from “Dr. No” and “Die Another Day,” as well as never-before-seen content from the 21st Bond film “Casino Royale.” The game comes with a Party Play feature, six collectible metal tokens, 200 trivia cards, 30 Q cards, a certificate of authenticity and more. Launch date: September 15, 2006. 12/6/2006 (MSRP: $49.95; Age: 13 to Adult) 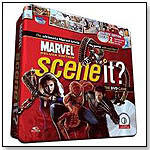 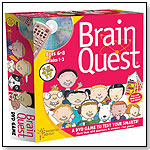 This new educational DVD game lets a whole family play together in the comfort of their living room, using just a DVD player, TV and remote control. The game is based on Brain Quest, the No. 1-selling question-and-answer game for kids. The fun quiz questions are supplemented with logic, text and audio games to keep children interested as they learn. Exciting action games are offered as a reward, motivating kids to advance. There are two versions, including one for ages 8 to 10, with more than 450 questions and answers in each game. Each DVD game includes a free mini Brain Quest deck. Launch date: Fall 2006. 10/20/2006 (MSRP: $24.95; Age: 6 to 8)

This edition of the educational DVD game is geared toward grades 3 to 5, and although the kids can play by themselves or with friends, mom and dad can also take part to turn it into a family game of knowledge. The fun quiz questions are supplemented with logic, text and audio games to keep children interested as they learn. Exciting action games are offered as a reward, motivating kids to advance. Launch date: Fall 2006. 12/11/2006 (MSRP: $24.95; Age: 8 to 10)

Pirates of the Caribbean DVD Treasure Hunt by IMAGINATION ENTERTAINMENT

"Pirates of the Caribbean II: Dead Man's Chest" was the biggest movie of the year and this game features clips from both films starring Johnny Depp as the swashbuckling Captain Jack Sparrow. By entering codes with a TV or DVD player remote control, players are led to pirate riddles, booty cards and hidden treasures for the taking. The game board is cleverly fashioned in the shape of a treasure map. The package also includes four pirate ship player tokens and is designed for 2 to 4 pirate players. Launch Date: Summer 2006. 12/11/2006 (MSRP: $29.99; Age: 6 and Up)

In this DVD betting game based on the British TV hit, players wager sushi pieces on bizarre Banzai stunts that made the show a classic. Two or more players race to fill the betting bowl with pieces using only chopsticks, and watch Lady One Question, Insect Roulette, Mr. Shake Hands and others on screen. Launch date: August 15, 2006. 12/6/2006 (MSRP: $29.99; Age: 16 and Up)