Animal Figures Expand From Zoo Stores to Toy Stores and Beyond

By Elizabeth Greenspan
February 2007
Since 1980, Safari Ltd. (ToyShow) has been making all types of realistic animal figures as well as puzzles, science items and more. Owner and President Ramona Pariente was a young mother of two when her parents asked her to join the family business in 1985. Starting as a commissioned saleswoman, Pariente rose through the ranks and attained her present position after her father’s death in 2003. Pariente told TDmonthly Magazine how her fearless attitude enabled her to make a successful business even more successful.

When I took over the company, I had this enormous task: Revitalize the branding of Safari, which had become complacent in the marketplace. I analyzed and revised, revamped, and redefined the selection and look of the company. It has proven to be quite successful. 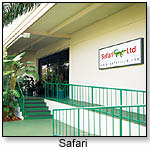 I restructured the company — what people were doing every day — and physically altered the offices. I re-equipped everything — new computer system, new desks. It took about two years, and I’m still doing it.

The offices were redesigned for better communication and workflow. I knocked down walls and created a big, beautiful room for communication. National and international sales now share a big open space.

I noticed a significant change in communication, attitude and productivity. When the walls came down, so did the barriers.

Safari toys are educational and they are uniquely designed to capture the nature of the animal. Our collections come in a variety of sizes — from Good Luck Mini animals that measure 1” to Incredible Creatures that range from 5” to 35”.  No one else has that. 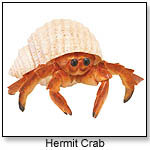 In the beginning, we focused on the school industry, zoos, aquariums and museums, but now we also sell to toy-, gift- and bookstores. Dinosaurs, for example, can go into zoos and museums in addition to bookstores, schools and toy stores.

If Safari had depended purely on the toy market, we probably wouldn’t be here today, but our range has enabled us to maintain growth. We not only sell into a variety of markets, but we do it worldwide — to more than 45 countries. We have a customer base of more than 7,000 active accounts; 2006 was a banner year.

Promoting Online and Off

Promotion is done through our in-house advertising team, trade events and the Internet.  Trade shows are the most successful, and we attend a lot of them worldwide.

We’ve always had a small national sales team in addition to outside reps. Now we have 85 outside reps. In addition, every year we send out a 200-page catalog.

My advice to someone starting out in this business is never to forget that sales is the head of the dog; without a concerted effort focused on sales, your business probably will be doomed. It doesn’t matter how many competitors or computers you have, or how many brilliant toys you’ve created — without sales it doesn’t really matter.

But perhaps the most important thing to remember is that without passion and perseverance, it’s difficult to succeed. Make sure you enjoy what you do.

Following are a few of Safari’s many new items for 2007: 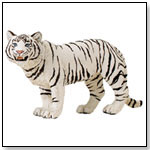 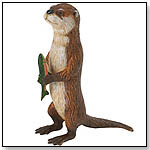 This upright otter holds a fish and measures 3.7” long by 5.1” high. The hand-painted replica is made of phthalate-free PVC and comes with educational information in five languages. A minimum order of six is required. 12/14/2006 (Age: 3 and Up)