This 40-Year-Old Toy Has a Mission

By Bridget White
March 2007
What looks like a piece of scrap metal but sails through the air like a deranged Frisbee? It’s called Toobee, The Amazing Flying Can — a circular piece of aluminum that its manufacturer describes as “the longest-going unknown fad in the world.” And though Toobee is still a niche product, its motto, mission and contagion aim to carry it far.

Gregory Stromberg, owner/manager of Toobee International (ToyShow), explained to TDmonthly Magazine why the product has such appeal: “Nothing flies like it. It weighs less than three grams, so if you throw it with the wind, it will keep going forever because it’s as light as a piece of paper. It bounces off air currents and does all kinds of funny things. It actually looks like it’s moving in slow motion.”

With a maximum soaring distance of almost 100 yards and a stable full of tricks, Toobee has developed a loyal fan base. Stromberg said he often receives emails from people who have had their Toobee for 30 years or more and are happy to see the company still in business.

Toobee was developed by two engineers about 35 years ago in Santa Barbara, Calif. Aeronautical engineer Dale Klahn was fascinated by airfoils and wanted to develop a perfect one. His search ultimately led to aluminum cans; the material is flexible, sturdy and lightweight, and the width back then (2-11/16”) was perfect.

When Klahn cut a cross-section out of an aluminum can and curled back the edges, the Toobee was born.

“Initially, he was using recycled cans,” Stromberg told TDmonthly, “but then he went to the can company and had them produce virgin cans.”

Stromberg, who used to work in the can industry, acquired the rights to the product a few years later and has been manufacturing and selling Toobee ever since.

Stromberg believes in his product so strongly that he relies exclusively on word of mouth to generate sales.

“We tried some advertising,” Stromberg said, “but that was very expensive, and we’ve decided we’re going to put the emphasis on the product quality and word of mouth. We’ve been giving away a lot of Toobees, because we know if people play with them they are going to have fun.”

Stromberg donates 20 percent of all profits to children’s charities (currently UNICEF), and said the company plans to fly around the world to promote world peace by bringing people together. They even have a positive motto: “Success comes in cans; failure comes in can nots.”

Currently, Toobee is exclusively sold through the company’s website, but Stromberg is open to partnerships and opportunities that allow for a good margin and continue the company’s purpose.

Toobee International has developed a number of products to support and complement Toobee: 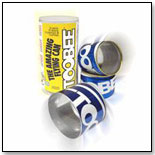 By design, Toobee is a cylindrical wing or annular airfoil. The Toobee pilot simply grips the can like a football and throws it, rounded edge forward, like an NFL long bomb. When thrown properly, Toobee will sail, soar, swoop and curve floating on air for distances almost the length of the football field. The patented high-tech aluminum airfoil is only .005 inches thick and weighs less than a marshmallow (3 grams). Its extreme lightness and specially rolled edges, make Toobee a toy that can be flown safely indoors or out. It can be tossed for distance, accuracy, fun or competition. Toobee "helps children stay healthy while having fun," Gregory Stromberg, CEO of Toobee International Inc., told TDmonthly.
11/22/2005 (MSRP: $9.95; )

Now, you can give the gift of membership to the Toobee fan in your life. Toobee The Amazing Flying Can is safe fun for all ages and can be played indoors and out. The kit includes a membership card, a membership certificate, three Toobees with a carrying case and a T-shirt. The membership kit also includes free shipping, and like all other Toobee products, includes 100 percent of profits donated to a children's charity, Cannedwater4kids. Launch date: November 22, 2005. 1/3/2007 (MSRP: $29.95; Age: 5 and Up)

The Official Toobee Player’s Handbook has something for every Toobee player, from beginner to expert. It contains the history of Toobee, The Amazing Flying Can, and photos demonstrating technique for basic and advanced throws. The 52-page paperback also includes games and plenty of insider tips and how-to instructions for succeeding at and enjoying the Toobee. Like all Toobee products, the Player’s Handbook includes 20 percent of profits donated to children’s charities. Launch date: November 22, 2005. 1/3/2007 (MSRP: $5.95; Age: 5 and Up)

This cotton T-shirt is the perfect way to let the world know you belong to the elite Toobee Air Force. The white shirt bears the Toobee mascot on the left breast or across the front of the shirt. It is available in youth sizes medium (10-12) and large (14-16) and adult sizes large and extra large. Like all Toobee products, the shirt includes 20 percent of profits donated to children’s charities. Launch date: November 22, 2005. 1/3/2007 (MSRP: $19.95; Age: 5 and Up)