Searching for Treasure … and Finding It

By Mark Zaslove
February 2007
Take something commonplace, look at it from a new angle and …Voila! The next big toy. Toy Sleuth scanned the globe to give a “What’s up, Doc?” nod to what’s coming down the pike, and found teddy bears transformed into robots, dinner plates that become toys, and an RC dune buggy that finds gold in them thar hills. Here’s more: 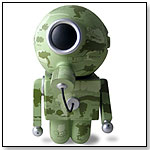 Kow HazMaPo, issued in a limited set of 250, is a new HazMaPo character ― you know the ex-Cold-War-era assassins who are highly trained in one specific area like shooting or scamming, but in their spare time don’t do much more than enjoy tuna dogs or daydream about Pittsburgh Steelers Cheerleaders. According to Leah Preston, director of marketing and public relations at UNKL, “We imagine that due to the toy's ties to Maschinen Krieger, a highly collected toy line, this one will be in high demand by fans of Kow Yokoyama's work.” It’s also just plain cool. Launch date: February 23, 2007. 1/30/2007 (MSRP: $69.99; Age: 12 and Up)

Wow Wee is known for its robot dinosaurs and other heavily boy-oriented stuff, but here’s a change. A cuddly robot? Yup, the RoboPanda is an interactive, infrared and touch-sensitive, accelerometer-installed product of the 21st century that can tell stories, recognize its playmate, track objects, avoid obstacles and more. The Jetsons are now. It even has “moods.” It stands almost 2’ high and is just the right size around for hugging. David at Wow Wee was at a loss for more details, but said he’d been inundated with questions: “I don’t know anything other than lots of people seem to want to find out about it.” 1/30/2007 (MSRP: $229.00; Age: 4 and Up)

This is the Swiss Army Knife of metal detectors ... or is it the Transformer of radio-controlled vehicles? It’s two products in one. The ATV RTR Metal Detector Vehicle is a cool dune buggy kinda thing that races off all-terrain, guided by the whims of the kid controlling it. It also has a metal detector built in (good down to 10”) for finding coins, cans and buried treasure. Kids can take it to the beach and zoom around, and when it beeps, dig. A couple of plastic digging tools complete the set. 1/30/2007 (MSRP: $34.99; Age: 8 and Up) 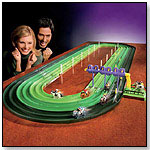 Parents don’t really want their kids hanging around the track, but having the track hang around the kids? This huge six-lane horse track (can take 90 seconds for a whole race) features individual horses and jockeys, different weights for horses and jockeys, the sound of pounding hooves, the whinny of excited horses, a starting gate, an electronic winner’s timer ― the whole nine yards including the back stretch. A similar four-lane racing set is available in the states. When asked about it, Richard Dockins of the Manor Downs race track in Austin, Texas, said, “The lure of the ponies can start young. I’d bet on this toy to win, place and show.” 1/30/2007 (MSRP: $120.00; Age: 6 and Up)