By Dennis Furlan
June 2007
Games about life are nothing new ― we all grew up playing Monopoly, Payday and The Game of Life ― but that isn’t stopping Rahn G. Porter from trying to crack into the genre, almost literally.

The president of Boxing Express invented a game called The Original Boxing's Greatest Championship, in which players try to fight their way to victory, learning not only about the sport but also about life.

What does boxing have to do with life? According to Porter, it teaches lessons to which almost anyone can relate.

"You learn a lot about yourself and life in the sport of boxing, let me tell you," Porter told TDmonthly Magazine. “Boxing taught me that if I dedicate myself and be disciplined, I could make something difficult seem easy.”

He grew up in the sport and went on to a short-lived professional career. Like so many others before and after him, Porter feels it could have been much more.

"I want people to learn the lessons I didn't get to learn when I was young," he said. “The game teaches you that boxers have ups and downs in life. It also teaches about dealing with people who can influence you ― positively and negatively. It covers money, health, legal issues, personal relations and achievements.”

SON STEPS INTO THE RING

In 2001, Porter’s 11-year-old son expressed that he wanted Daddy to invent a boxing game they could play together in their spare time. Porter took the request seriously and started out on a determined path to give his son exactly what he wanted. It was a slow and gradual but creative process.

Porter first took a dresser drawer and fashioned its bottom into a game board. He then upgraded it to cardboard. In 2002, he went to an art supply store and built himself a board that served as a prototype for the current version.

"All along it took a lot of effort and a lot of thinking," Porter said. He started producing the games in September 2006 and selling them in December.

His main effort to sell the game has been via his website, where purchases can be made directly. Until recently, he's had to rely on word of mouth and community contacts to spread the word. At Games Expo in Las Vegas in March, however, Porter made new contacts (including TDmonthly staff, he said) that he hopes will help his unique take on life lessons catch on with the broader public. 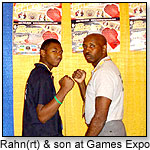 "Probably the greatest challenge for me has been maintaining focus and finding the time to do this," the full-time postal carrier confided to TDmonthly. But Porter's attitude toward life has helped him along the way. "If you just take it in stride,” he said, “then you've got no reason to complain."

Perhaps it's this kind of wisdom that Porter hopes will rub off on people while they enjoy his game.

And in this corner:

In this championship game, players have fun acting as a boxer, learning punches and defensive skills as they strive to win. Sometimes they make good business decisions, get rich, prosper and buy a mansion, yacht, expensive clothes and more. But sometimes they lose. Players have to watch out for greedy people that cheat them, taxes that can break them, a spouse that will take half of the earnings and, of course, knock outs. “Players learn about boxing skills, rules, finances, hardships and victories,” President Rahn G. Porter of Boxing Express told TDmonthly. “[It] doesn’t always add up to championships and endless riches.” Launch date: December 2007. (