By Dennis Furlan
June 2007
Gerry Groundwater, owner and founder of Giddy Goose ‘n Gander Games, is serious about the importance of thinking outside the box in the games market.

As the technology business specialist and games inventor told TDmonthly Magazine, “There are so many people in the games industry that it’s hard to get noticed. It’s why you have to be different and innovative.”

With two games ready for distribution, Piratack and Piratitan, and at least two more in the works, Groundwater believes he has the formula to succeed in a tough market.

“The first thing we did is to make the games look great,” he shared with TDmonthly. “They’re hand drawn and jump out at you visually. The second thing we did is to do away with the same old game play, where you roll the dice and move your piece around the board over and over again.”

So, instead of dice, Piratack has cards. Instead of moving a piece around the board repetitively, it has stages where the rules change. Instead of playing it at a predictable pace, it comes with a timer.

As Groundwater put it, “Our games add a dimension of chance and excitement in ways that traditional game boards don’t. It’s that simple.”

FROM PLAY TO BUSINESS

Groundwater first decided to take game invention seriously after getting some feedback from friends regarding an early version of Piratack.

“For a number of years now, I have had various ideas about games. However, a couple of years ago, while on the beach with a bunch of friends, one evening I suggested we play the game I had been working on in my spare time,” Groundwater told TDmonthly. 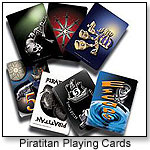 The reaction from his friends was positive. One of them, a graphic designer, teamed up with Groundwater and started to develop the idea and the game.

He believes his team now can do much of the design work that they once had to outsource. Manufacturing, of course, is outsourced and will continue to be outsourced, but the biggest lesson he’s learned so far is that much of his own experience in other industries can be applied to the game industry.

From negotiating with business interests internationally to rolling up his sleeves and doing some of the technical work himself, he feels confident in forging ahead with new games and new ideas.

Groundwater also believes his production setup is a good fit for the specialty retailer. His international experience allows him a direct line to production facilities and he can produce unique orders when necessary.

Since Groundwater’s first games deal with pirates — a favorite theme among boys and the specialty toy-store owners who serve them — he could be getting those “flexible” orders quite soon:

Aaarr! Hoist your sails and set your course for high seas adventure in Piratack. This thrilling new board game beckons you into a world where all can join in swashbuckling fun. Players must throw caution to the winds as their ships voyage through tranquil and stormy seas or pass through whirlpools. Ships must trade cargo to increase their strength in cannons because when time runs out, you can't escape...
Piratack. In the end, the fiercest will battle for the ultimate sovereign rule as Piratitan.
— “Innovative game play along with eye-catching graphics are two fundamental goals of our designs,” Gerry Groundwater, owner and founder of Giddy Goose 'n Gander Games, told TDmonthly. “Although it costs more, we opted for hand-drawn graphics as a way of differentiating our product. This makes our approach and games particularly suited to specialty retailers.”
— "The more players you have, the more fun you have (because there are more ships to attack!)," raved Susan Ledford, a Homeschoolers Roundtable mom who reviewed the game for TDmonthly. (

Aarrr! Piratitans are back. In this fast-paced card game, players pick their victims and seize their treasure. They can try to escape but must beware; they can’t outrun Piratitans. This game is unpredictable fun for everyone. Kids won’t even know it’s educational when they battle each other with ships loaded with cannons.
— “I’ve never seen a card game like this before,” said 11-year-old Victoria Ledford, a Homeschooling Roundtable partcipant whose family loved the game and gave it 5 of 5 TDmonthly stars. What did she like most about it? "Everything!" 1/2/2007 (MSRP: $9.95; Age: 6 and Up)