Die-Cast Rolls Along With the Best of Both Worlds

Over the past few months, TDmonthly Magazine spoke with 34 specialty toy-store owners and managers to discover the forecast for die-cast in their stores. Eight said they don’t sell die-cast at all, but of those that do, popular buys include everything from 5” Volkswagen Beetles to pull-back school buses.

Kate Noreen, manager of MudPuddles Toys & Books in Sherwood, Ore., has noticed a shift toward contemporary die-cast cars, such as Mini Coopers and Cadillac Escalades.

“They're moving more toward the modern cars and away from the classics like T-Birds and Corvettes,” she said. TDmonthly’s list of the Top-10 Most-Wanted Die-Cast Vehicles, in fact, features a balance of cars new and old.

Manager Char Mcaulay of Toy Town in Casper, Wyo., indicated that even weather can drive die-cast sales. “Because it's nicer out,” she said, “we're selling more of the convertibles and tractors. We're selling more cars than airplanes, too.” Only three of 35 retailers mentioned airplanes as best-selling die-cast items.

Fred Rosenberg of On the Park in Kingwood, Texas, said demand for collectibles has increased. His assessment is based on tween boys, ages 8 and up, for whom his store is “going to bring in collectible Star Wars and die-cast.”

But more specifically, “NASCAR is dead,” she said, claiming the organization “killed the market for itself” by changing paint colors by the race and making it necessary to purchase multiple models to keep up.

On other fronts, “RC2 has pretty much bowed out,” shared David Campbell, owner of Amazing Toys in Great Falls, Mont., who believes certain scale models are losing momentum.

“I think the big business in collectible cars, in general, like the 1:18, has probably played out, too. Everyone in the Baby Boom generation has their 1:18 scale car of their dreams,” he said.

Vice President of Marketing Greg Miller of RC2 Brands, however, told TDmonthly the company is “seeing some renewed competition in classic cars,” and consensus regarding a rise of modern models “may reflect the automotive industry and how they’re trying to develop the classic look in their new cars.”

Miller also believes “there are new buyers coming into the marketplace.”

See the die-cast that manufacturers and retailers are talking about below, and find more toys in July 2007 New Toys – Die Cast.

Tonkin Replicas' Precision Series has long been the elite diecast replica for private trucking companies, and now a new Pennzoil tanker is available, with the details that have made the Precision Series name. Features such as opening doors, hitches and hood along with turning wheels and independent suspension adorn this Kenworth W900 Day Cab and chemical tanker. The Precision Series has been voted diecastcollecting.com's Favorite Diecast Line and is continuing to win more fans every year. 4/23/2007 (MSRP: $85.00; Age: 18 and Up) 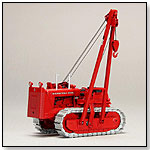 This die-cast 1:25 scale crawler features more than 180 individual parts. The side boom pipe layer is fully functional. The metal tracks are free rolling. “This is the first mass-produced crawler with a functioning side boom pipe layer,” Mike Sinnott of SpecCast told TDmonthly. Launch date: January 2007. 2/27/2007 (MSRP: $89.00; Age: 8 and Up)

This 1986 Chevy Corvette Convertible is a 1:24-scale diecast collectible model car. It measures 7.25"L x 3"W x 1.75"H and has openable doors and hood, workable steering and free wheeling. It is manufactured by Motor Max diecast collectibles. There are four pieces per display box in assorted colors and 16 pieces per inner box. 5/15/2007 (MSRP: $14.99)

The new paint technique and weathering makes this tank look like it just rolled off the Eastern Front. These 1:72-scale tanks are made of 90 percent metal. The quality that they can achieve with metal puts their models a step above the competition. 2/6/2007 (MSRP: $18.49) 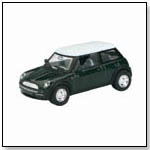 A miniature, 1:56-scaled, metal die-cast version of the real thing, the 2.5” Mini Cooper Classic provides kids with a detailed model at a very low price. Other cars from the line allow kids to build up their own collection of the playable models.
— "They just look very real and the younger kids — 3, 4 and 5 years old — just love to play with them," was the reaction from Char Mcaulay, manager of Toy Town in Casper, Wyo.
— "Probably the quality matters more than anything," added Jenny Pyle, assistant manager of Discovery Pond in Miles City, Mont.
— The MINI trademarks are used under license from BMW AG. The model is available in blue, black, red, yellow, green and silver, and features pullback action. 7/28/2006 (MSRP: $3.95)