In 2005, Frank Frisari and John McCoy pooled their talents to create geometric magnets and the flexible plastic Q-Man. Two years later, they have a line of colorful novelties. Frank told TDmonthly Magazine how he and John turned an original idea into a booming business.

I was a graphic designer and illustrator, and John worked as a sales coordinator for a vendor. John thought he could do well on his own, but he needed to team up with an artist, so he approached me. I didn’t know anything about business; my goal was to design cool products.

We started by selling already-made stuff. But that means you’re competing with other people who are buying the same stuff. So we went back to New York and made shape magnets.

Our products and our packaging are appealing because of the simplicity of the design. An example of this is the Q-Man, which has become popular in many ways that we didn’t anticipate.

Q-Man is a human form and people gravitate toward that. The colors are fun, it feels good in your hand, and it’s flexible. We use strong magnets, so the Q-Man is functional — he’s poseable and can link with other figures.

We had only an illustration of him at the stationery show in May 2006, but people told us that if we made it, they’d buy it. We started producing it in October 2006 and it became a really popular item for toy, museum and gift stores.

In the beginning, it was difficult to get the product into the right venue. We went to our first trade show in 2005 and were stuck in the general gift area, where we don’t belong. We only did okay.

Then we met an agent, Charlie, who had premiere space in the museum section and took our product to his next show. People liked it and it snowballed. We added products and more colors.

In less than two years we became the biggest product line of all of Charlie’s vendors. He handles most of our shows, although we’ve done pretty well at a couple of solo shows because of our reputation. Initially, we used only Charlie and another rep, but we just signed on with two more.

Direct mail is important, so before a show we do a big mailer and send postcards so people know where to find our booth. And we have a website because not everyone goes to the shows. I also hit the pavement and have gotten stores in my area to carry our product.

We each put in $25,000 to start the business and borrowed from our families, and we were almost profitable at the end of the first year.

Our products are in more than 600 museum, gift and toy stores. We also sell to CB2 in Chicago, which is Crate and Barrel’s design store.

One piece of advice is to take credit cards with the first orders of people you don’t know.

If you get into the business by buying what already exists, you’ll be cut down fast. Spend the time, money and energy to make something no one else has seen — something that’s original, useful and functional.

Originality has kept us alive and flourishing. What we did cost money, but it came back to us tenfold because we’re the only ones who make it. 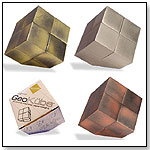 This set includes 16 translucent straw pieces and 20 flexible rubber connectors so that kids can create their own fun straw. It is non-toxic and dishwasher safe. Orange, blue and lime sets are available. Chris Mindel, of distributor ThinkGeek, said of this novel construction kit that “the real limitation seems to be how much the builder can suck. I do think there will eventually be scientific limitations; it is much easier to pump liquids through long pipes than to suck liquids through pipes.”  Mindel recommends anything with caffeine and fizz — “the buzz is incredible” — and feels the coolest aspect of the Strawz is their ability to mix drinks: “Because you can have the straw dip into multiple cups, you could mix soda and flavorings.” 5/21/2007 (MSRP: $13.99; Age: 6 and Up)

Standing about 5.5” tall, these flexible rubber characters feature magnetic hands and feet that can also easily connect to each other. The following colors are available: white, black, orange, lime, clear, red transparent, pink, olive green, purple, slate blue, yellow and blue. Camouflage is available at a slightly higher price. The company requires a wholesale minimum of at least six pieces per color ordered. The Q-Man’s “unique design and flexibility gives it multiple uses,” Frank Frisari of NuOp told TDmonthly. 2/21/2007 (MSRP: $8.99; Age: 5 and Up)