Cool Company: How Personalized Bears Made a Millionaire

Retailers, Collectors and Creator All Profit at Herrington Bears

By Susan Ledford
November 2007
How do you turn $300 into a multi-million dollar international company? 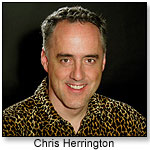 “‘Act’ is the marketing secret I operated on,” Chris Herrington, founder of Herrington Bear Company, told TDmonthly Magazine. “I didn’t wait,” he said. “I didn’t even have a business card.”

While working at The Cheesecake Factory in December 1984, Chris tried to catch the attention of a co-worker by making her a teddy bear that wore a T-shirt displaying the bakery’s logo.

“I didn’t do it thinking I would create a business of teddy bears,” he said. “I gave it as a gift.”

Once his co-worker displayed the original teddy bear on the counter in Marina del Ray, Calif., it wasn’t long before customers were asking to buy similar bears. Two months later, Chris used just $300 of his earnings and tips to make up 12 teddy bears sporting T-shirts with The Cheesecake Factory’s logo.

When those sold, he made 12 more. And then 12 more, next taking his personalized teddy bears to Giorgio’s of Beverly Hills. He reinvested his initial returns into more products for new companies, simply walking in off the street with prototypes.

Giorgio’s, Hard Rock Cafe and other well-known companies followed. As those companies grew and expanded, so did Herrington Teddy Bears, creating a brand by promoting logo recognition using an adorable keepsake that also became a valuable collectible.

“I did not have a dream of owning a toy company,” Chris said. “I just started doing something that was in front of me.”

The company now has a large following of collectors, some of whom will pay thousands of dollars for bears at auction events. A Hard Rock Cafe prototype bear once went for $3,000, and bears autographed by Chris routinely sell for $500. His company regularly donates prototypes to charity events.

HBC regularly keeps in contact with its ever-growing following via opt-in e-mail. “We do a lot of direct weekly promotional e-mails to our collectors, which is important for web-based business,” Chris explained to TDmonthly. The company also maintains an online archive of all bears ever produced.

Herrington recently expanded into collegiate plush. As Chris said, “Every major college has our product; we are the premium prestige brand for the college industry.”

His company also now offers retailer-designed, customized teddy bears with a 24-piece minimum order at a suggested retail price of $20.

“Act on what is front of you right now,” he advises TDmonthly readers. “I didn’t wait. It was an investment in passion versus money.”

See below some of the products that came from that passion:

This soft 10” bear is a member of Herrington’s Celebration Collection, which includes more than 30 different greeting, holiday and special occasion styles, each of which comes with a mini greeting card. This floppy-style teddy is dressed just like Santa in his hat and coat, and even has a red bag over his shoulder. “Each bear has the unique "HTB" button on the leg highlighting the prestige of Herrington Teddy Bears,” President Chris Herrington of Herrington Teddy Bear Company told TDmonthly. Launch date: October 2007. 4/10/2007 (MSRP: $12.00; Age: All Ages)

This 13” floppy-style bear is available with your choice of an embroidered name drop on its hooded sweatshirt. The sweatshirt is available in 21 distinct colors, and the teddy bear is available in either old-fashioned honey-colored fur or pink chrislon fur. Lettering is available in six different font styles and eight different colors. “All of our plush teddy bears are designed and handcrafted to insure the highest quality and consumer appeal. They all come with a free certificate of authenticity,” President Chris Herrington of Herrington Teddy Bear Company told TDmonthly. Launch date: August 2007. 8/16/2007 (MSRP: $20.00; Age: 3 and Up)