By Mark Zaslove
December 2007
TDmonthly Magazine’s December Toy Sleuth looked about for what's hip, what's happening and what's "Charlie." Lo-and-behold, all sorts of interesting things popped up. From geographical jigsaw puzzles to inflatable robots, some are avant-garde, some are action-packed and some are just plain weird. Take a look…

Lasers, crashing cars and automotive combat are all at the touch of a radio-controlled button. This mano-a-mano dueling game includes two cars and two controllers, which don't just control the cars, but control the "deadly" infrared laser cannons. The first player to fire and hit his opponent 10 times wins. There's even an invisible shield that goes up for five seconds to protect the car in the heat of combat, as well as a car-containing boundary. Bryan Goddard, customer service rep for Hammacher Schlemmer, is looking forward to getting his hands on one. "Unfortunately, we have not used the cars yet,” he said. “We are currently waiting to receive the first shipment." 10/4/2007 (MSRP: $99.95; Age: 8 and Up) 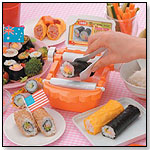 Ideal for those budding Anime-loverswho want to DIY, the Automatic Sushi Roller is made of blindingly orange plastic and is designed for use in an easy, step-by-step process. Users simply pour in the cucumber, crab, avocado and whatever, roll the knobs to shape it, do the same for the rice, and then feed in the nori strip, roll some more, and … instant California roll! Chiyoko Niigata of the Bandai home office had tried one: "They make very good gifts, and are very accurate. They wash-up very clean, too." 10/4/2007 (MSRP: $10.95; Age: 8 and Up) 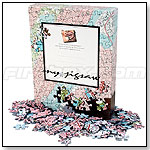 Each 400-part map-sterpiece is custom made for your ZIP code, down to the house number and street name (takes about 2 to 3 weeks for delivery). Based on U.S. Geological Survey maps, you can see everything there is to see in your neighborhood, or try a different ZIP code to find out how the other half lives. The product is made from high-quality 1.5 mm millboard, and the pieces fit together like butter. Jennifer Varon, the Firebox representative at Sandbox Strategies, tried one herself. "A bit of cheating went on, though, because the whole office helped. It took about four hours," she told TDmonthly. Both the customized aspect and the incredible detail resonated with the people who tested them out. "They show every street park and school within the designated ZIP code,” she added. 10/4/2007 (MSRP: $34.95; Age: 8 and Up)

What kid doesn't want a giant inflatable robot that acts on their commands? This 4”-plus–tall, radio-controlled man of air can even record and play back phrases in killer-robot tones. "I want one," said a resident 8-year-old bent on world domination. "Me, too," sang out a 10-year-old girl across the way. "I want to scare the dog and then dress it up. If we got two, we could have a war." Manley representatives have said it's selling well, but expect a big boost come Christmastime. "It's at a price point that it makes an easy gift decision,” one representative told TDmonthly. 10/4/2007 (MSRP: $39.99; Age: 5 and Up)