Storeowners Step Out for Toy Fair

Retailers Look for Europe in the Big Apple

By Julie L. Jones
February 2008
Two-thirds of the 24 specialty retailers surveyed by TDmonthly Magazine this month said they’ll be attending the American International Toy Fair in New York City next week, browsing for games above all else, but also shopping for wooden toys, construction toys and everything from puppets to puzzles.

WHY, I DO RECALL…

Owner Linda Ambrosino of G. Willikers in Saratoga Springs, N.Y., is expecting a different show from years past, due in part to the many toy recalls. “I haven't done as much pre-show ordering because I think I might need to change direction,” she said. 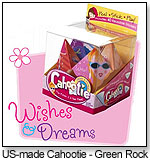 Both Linda and Jane Willis, co-owners of The Village Toy Shop in New Hartford, N.Y., plan to check out companies that manufacture in the United States, or, as Jane said, products “not made in China.”

Adam Frost of The Wooden Wagon in Ossining, N.Y., specializes in product from Europe and pointed out that Toy Fair isn’t his primary show.

“We meet with the majority of our manufacturers at the Toy Fair in Germany,” he told TDmonthly. “But we will certainly go to see HABA and Selecta to say hello and reacquaint ourselves with the people on the other side of the phone.”

Playmobil is another German company that appeared on retailers’ lists of manufacturers to visit.
But Candace Gooch, owner of At Once All Agog in Limerick, Maine, isn’t sure her picks will even be at the show.

“What I'm hoping I will find are some of the European products that were not at Toy Fair the past couple of years — Ostheimer and Kinderkram,” she said.

Stacy Coleman of The Peanut Gallery Toys in Murfreesboro, Tenn., believes it’s crucial to see certain kinds of products — dolls, Papo figurines [from Hotaling Imports] and Bruder trucks, for example — at the show to evaluate detail and functionality.

“I like to see every toy that I order,” she told TDmonthly. “Typically, if I don’t see it, and order it, I’m not as happy with it when I get it in.”

Owner Christine Osborne of Wonder Works in Charleston, S.C., plans to begin her booth visits on the lower level exhibit hall, finding companies who are "hungry for [her] business" with good customer service and reasonable pricing.

Alan Brafman, buyer for Little Things Toy Store in Brooklyn, N.Y., is “looking to visit manufacturers with whom we have long-term successful relationships. … Good manufacturers will often expand into new categories.”

“I never go to see the manufacturers that I already deal with, for the most part. I'm going to find somebody that I don't know exists,” she said. “Typically, I get really excited if I can find three or four.”

As for companies that have been around, Osborne is intent on visiting Melissa & Doug because of the company's "unbelievable customer service" and the way they take care of specialty stores. Here are several others retailers plan on seeing: Corolle, Folkmanis, Briarpatch, Mattel, Hotaling Imports (Papo), Alex, Manhattan Toy, International Playthings, Madame Alexander and Blue Orange Games.

See products by these companies below:

This 7 cm Viking cheerfully watches over Baby while he sleeps. He features a helmet, shield and bright colors on his wooden frame.
— Selecta’s push toys were listed as top sellers by Owner Candace Gooch at At Once All Agog in Limerick, Maine, in May 2009. “It’s a shame that Selecta decided to pull out of the USA market due to CSPIA’s testing requirements,” she told TDmonthly. “I figure if a product meets the EU’s testing standards, then it should be fine for the USA. There are so many fantastic and safe European toys that our children will miss out on.” 2/14/2008

Triceratops with Baby by PLAYMOBIL INC.

With this set, children can capture a video of the enormous Brachiosaurus with the adventure-seeking explorers. It includes a camera, two figures, a frog, a sword, a cave, trees and other accessories. The Brachiosaurus has movable parts. Launch date: January 2008.
— Four of 66 specialty retailers named Playmobil as a top seller in their stores in May 2008. “We sell a lot because there's so much of it, and for the money, it has great play value,” Mike DiAndrea, manager of Hardware Center, Inc., in Paoli, Pa., told TDmonthly. “They do try to keep up with the trends.” 12/18/2007 (Age: 6 and Up)

This hand-painted character is designed to encourage children’s imaginations as they play. It shows the famous Robin Hood in colorful clothing with weapons at hand. 2/14/2008

This pocket-sized, 1:128 scale die-cast tractor is designed with working parts and features fine detail. The replica, which measures 1.9” L x 0.9” W x 1.1” H, comes with a screwdriver for installing the included tow hitch or key chain to the rear. 2/14/2008

Dolly Licorice is a 10” vinyl doll with a cloth body and black hair. She’s dressed in bright colors with striped stockings and a pink streak running through her hair. Launch date: January 2008. (

In this game, kids create one-of-a-kind critters with the turn of a page. The flip books have color-coded index tabs and are divided into top and bottom pages. Roll the die and flip the tabs accordingly, creating up to 100 different animal combinations. An added feature of this board game is that all players play at once. Each game comes with a game board, four flip books, four soup spoons, a soup bowl, 15 animal tokens, a color-coded die and complete game rules. Launch date: Spring 2008. 12/7/2007 (MSRP: $19.99; Age: 5 and Up)

Created for children ages 6 months and up, this super-soft snuggle pal comes in his own satin-lined "pod" and is based on the WHO character from the Dr. Seuss classic "HORTON HEARS A WHO." Babies will love toting and tucking in their own adorable first baby doll. Launch date: January 2008. 2/12/2008 (MSRP: $15.00; Age: 1 and Up)

This toy offers stomp-action fun with two soft, safe rockets and a stomp launching base. The flying height of the rocket depends upon the strength of the stomp. Launch date: 2005.
— Stomp Launchers are a top seller at Juggles in Wakefield, R.I., Owner Idanna Smith told TDmonthly. 11/5/2007 (MSRP: $8.00; Age: 3 and Up)

The wooden game will help children enhance their memory skills. The game invites children to guess which penguin is hiding which brightly colored egg. Each egg hides perfectly inside each penguin. Launch date: 2008.
— In late fall 2009, Sue Banducci of Games Unlimited in Danville, Calif., estimated sales of 150 to 200 Pengoloo games in December. Two of 44 specialty retailers named the game as one of their overall best sellers. (

The Baby Bathroom is specially designed to fit in the Baby Play House, but can also stand alone. The bathroom includes a shower stall, a vanity sink with a mirror, a toilet with a seat that lifts up and down, a throw rug, a bath towel, a little basket for towels and more. Calico Critters are available separately. 2/14/2008 (Age: 3 and Up)

Break out the pirate ship and set sail for lands unknown... but don't hurt your knees during the voyage. Children will love sprawling on this wonderful, New Zealand Wool, pirate-themed floor carpet. Measuring nearly 5' x 5' the Pirate Joe carpet will thrill and delight boys and girls alike. Made of New Zealand Wool. 12/7/2007 (MSRP: $250.00; Age: 0 and Up) 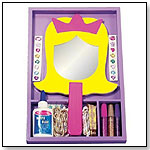 Each set comes with a special keepsake and plenty of materials to decorate and personalize the mirror. Kids can decorate their mirrors with hearts, jewels, glitter glue, ribbons and more. The entire set is organized neatly in a handy wooden case.
— LB Toys Owner Jamie Burdette in Media, Pa., told TDmonthly that Melissa & Doug’s decorate-your-own kits are so popular that her store sells “40 to 60 per month.”  Sallie Kashiwa, owner of Timbuk Toys in Denver said in July 2008 that her store sells 15 to 20 units per month of the Princess Mirror.
— Lyn Copeland, owner of Copelin’s Toy Zone in Norman, Okla., said that when it comes to Melissa & Doug items, her store sells “over 100 per month.”
— More than 13 percent of retailers told TDmonthly that Melissa & Doug’s arts-and-crafts products are their best arts-and-crafts sellers. In addition to this item, bead and magnetic dress-up sets by Melissa & Doug were also named as popular gifts for girls in a summer 2008 survey of 66 retailers. 1/16/2008 (MSRP: $9.99; Age: 4 and Up)