By Julie L. Jones
High-flyin' and fast-racing toys easily grab attention at Toy Fair, as do sleek die-cast and innovative robotics. Here are TDmonthly Magazine's top picks in these categories:

This 1:12-scale motorcycle with rider is designed with auto-stable technology in order to stay upright and lean into turns, simulating realistic driving action. It features spring suspension, digital proportional steering and speed control, a throttle-rate selector and a steering-trim-system. It operates on a 4.8V Ni-MH rechargeable battery and 27 MHz FM modulation radio control. 2/19/2008 (Age: 8 and Up)

The 1954 White WC22 tractor-cab and lowboy combination is decked out in authentic John Deere graphics and ready to haul equipment. The cab doors open to reveal a detailed interior, the distinctive piano-style hinged-hood opens to reveal a detailed White “Mustang” engine. The lowboy trailer is detachable from the cab and features positioning loading ramps. 1/7/2008

The i-Fly Vamp’s flapping wings mimic the behavior of a bird or an insect, giving the eerie illusion that the toy is alive. The two-frequency device can climb, glide, descend, make turns and fly freely for over ten minutes with just 20 to 30 minutes of charging. An R/C transmitter, a flight battery and instructions are included. No assembly is required. Launch date: December 1, 2007. (

The track- and car-set features a glow-in-the-dark track and a car that can complete 360 degree curls on the curved tracks and loops. (

Developed by Hydrogen Fuel Cell Technologies, this car runs on hydrogen power supplied from a charger unit that stores the water (fuel). It comes with a handset for controls and offers five to seven minutes of playtime per two-minute (full) charge. Whereas similar models, such as the H-Racer, were more for education and demonstration purposes, this model is designed for play, according to Mark Bawtree of Horizon Fuel Cell Technologies. Launch date: September 2007. 2/19/2008 (MSRP: $99.00) 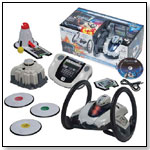 The Roboni-i features a programmable, remote-controlled robot that is equipped with sensors so it is aware of its environment. It is created especially for gaming and can function alongside other robots. The Starter Pack includes one Roboni-i robot, a remote controller, an infrared pod, a ball scoop, an electronic-game accessory, two electronic-game tags, an electronic ball, instructions, a USB cable, computer software, and five action games with remote-control reference cards. 2/19/2008