By Brenda Ruggiero
May 2008
At Creative Kids Toy Shop in Columbia, S.C., the Lee Middleton Newborn Doll Nursery is a main attraction, according to Owner Melodie Ingwersen, who told TDmonthly Magazine in a Retailer Spotlight that some parents even make out-of-state trips just for their children to adopt a doll. However, dolls aren’t the only items that reach the top of the shopping list. Here’s a list of the store’s top-10 best-selling toys: 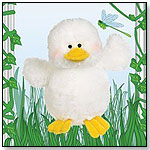 This cute little duck comes with a code that allows its owner to access Webkinz World online.
— Over 26 percent of 45 retailers surveyed by TDmonthly in early 2008 named Webkinz as their hottest selling item.
— “Webkinz by Ganz — they still sell out every shipment,” Melodie Ingwersen, owner of Creativity for Kids in Columbia, S.C., told TDmonthly in early 2008.
— “[They] have been really hot for the last couple of years,” she added. 2/18/2008

The neon-colored foam glows when the lights are turned off. The foam sculpting beads are reusable, lightweight, non-toxic and won’t dry, harden or stick to surfaces, providing hours of mess-free fun. The pack includes six neon bricks in white, green, pink, yellow, blue and orange.
— “PlayFoam has been selling extremely well for about the last two years,” said Owner Melodie Ingwersen of Creative Kids Toy Shop in Columbia, S.C., in early spring 2008.
— “Our No. 1 activity set is PlayFoam,” Ingwersen reiterated in April 2008.
— In April 2008, four of 50 retailers named play foam as a best-selling item, while two of the four named Educational Insight’s product as the best-selling kit their stores. 2/12/2008 (MSRP: $10.99)

Help the caretakers look after the Horse Farm. Stable has three horseboxes, section for refreshments and area for grooming. Includes three figures, three ponies, kitten, wheel barrel, hay, ladder, fences, and many other accessories. Dimensions: 21" x 11" x 10" (L x D x H). "The set...afford[s] children the opportunity to play over and over again!" Playmobil Inc. Advertising and Marketing Manager Michelle Winfrey told TDmonthly. "Playmobil toys encourage the imagination by allowing children to develop their own stories." Launch date:  March 2008.
— “Playmobil has always been a good line for us, for most of the time since we’ve been in business,” noted Melodie Ingwersen of 21-year-old Creative Kids Toy Shop in Columbia, S.C., in March 2008. “There have only been a couple of bobbles in its history. It was really hot this last Christmas when people were looking for non-Chinese toys.” 12/18/2007 (MSRP: $99.99; Age: 4 and Up) 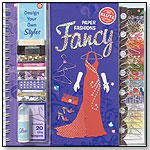 This glamorous set includes a 58-page book, 17 sheets of patterned and shaded paper, beads, sequins, sticky jewels, glue, organza and satin ribbon and a bunch of tiny hangers for girls to hang their miniature fashion creations when completed. Launch date: March 2008.
— “Klutz books have been steady sellers for us,” Melodie Ingwersen, owner of Creative Kids Toy Shop in Columbia, S.C., told TDmonthly in March 2008. 2/18/2008 (Age: 8 and Up)

The jumbo puzzle features thick puzzle pieces that are hand-painted, feature full-color images and are capable of standing on their own for additional play. When assembled, the puzzle measures 12" x 11" x 4/5". The puzzle promotes creativity and matching skills. Launch date: June 2006.
– “Melissa & Doug…we sell two or three of their products every day. The best selling one is their puzzles,” Steve Ricks, owner of My Story House Toys in Roswell, Ga., told TDmonthly.
– Over 63 percent of retailers who spoke with TDmonthly named a Melissa & Doug product as their best-selling wooden toy item. Melissa & Doug wooden animal puzzles are very popular at The Toy Shop in Lexington, Ky., the owner told TDmonthly. “We sell one or two a day.”
— “Klutz books have been steady sellers for us,” Melodie Ingwersen, owner of Creative Kids Toy Shop in Columbia, S.C., told TDmonthly in March 2008. 2/21/2008 (MSRP: $9.99; Age: 2 to 5)

The mom and baby koala duo is a plush set that transforms into a pillow and blanket set. The Zoo Collection also includes seven other varieties: Poallu the Polar Bear, Taj the Tiger, Pin the Panda, Tama the Tortoise, Orazio the Orangutan, Gogo the Gorilla and Bobo the Baboon. Launch date: 2008.
— “Zoobies have been doing really well, and I’ve been reordering,” said Owner Melodie Ingwersen of Creative Kids Toy Shop in Columbia, S.C., in early spring 2008. 3/3/2008 (Age: All Ages)

Sock monkeys made their debut over 100 years ago when mothers began to sew them for their children. This new, 22” version is a character from the movie “Mr. Magorium’s Wonder Emporium.”
— “Sock monkeys are making a comeback,” reported Melodie Ingwersen, owner of Creative Kids Toy Shop in Columbia, S.C., in March 2008. “Those by Schylling have gotten a nice response.” (