Alex Splashes Other Toys Out of the Tub

To say that toys by Alex-Panline dominate bath time would be an understatement. Nearly 70 percent of 64 specialty retailers surveyed this spring named the Alex line, or particular products from it, when discussing best-selling bath toys, beating even last year’s hype over the brand. Mentions of other vendors were few and far between, although Toysmith, Elegant Baby and Schylling did make the cut for TDmonthly Magazine’s top-10 most-wanted bath toys. See them all below:

Rub a Dub Draw in the Tub by ALEX BRANDS

Colorful works of art can be created on someone’s tummy, or on the bathtub wall, using this set of six bathtub crayons. A duck-shaped sponge is provided to erase the “canvas” and start anew. “This is one of our top bath items,” said Elin Kabo, director of communications for Alex.
— Cons: May stain some tubs (especially tile grout). Crayons disintegrate quickly in the water. One user said the crayons were much smaller than indicated on the package, due to being encased in a misleadingly long plastic holder. (Reviews from Amazon.com)
— Ten of 64 retailers named the Bathtub Crayons from Alex as a top-selling bath item, citing monthly unit sales of anywhere from six to 80 per month, in March 2009. Nearly 70 percent of the respondents named the Alex line in general, or a particular product from the range, when discussing best-selling bath toys.
— Eight of 39 retailers named this product a best-selling bath item in March 2010. Nearly 67 percent of retailers cited Alex as their No. 1 manufacturer for bath toys.
— Want this? As of 05/06/2011, this product was available for purchase at Doodlehopper 4 Kids.  7/15/2005 (MSRP: $6.49; Age: 2 and Up)

These floating drums introduce kids to rhythm while they bathe, and can be pitch-adjusted according to the amount of water in the drums themselves. They come with a waterproof rhythm chart.
— “We sell tons of Alex's bathtub musical instruments. A dozen or so [per month],” Mary Porter, owner of The Curiosity Zone in Ashburn, Va., told TDmonthly in spring 2009.
— In March 2009, eight of 64 retailers named instruments by Alex-Panline as their best-selling bath toys.
— Alex products are always top sellers for Melody’s Choices, Owner Steve Melody told TDmonthly in spring 2009. “Stock it well and it will sell well,” he said. 4/9/2009 (MSRP: $13.99; Age: 3 and Up)

These trendy cowboys (and cowgirl) add a little twist to the classic rubber duck. Four designs are available.
— “We have Cowboy Rubber Ducks from Schylling. People like the cowboy theme in Wyoming,” Dalene Lockhart, owner of Toy Town in Casper, Wyo., told TDmonthly in March 2006. She said she sells about six per month of this particular line of rubber duckies.
— Four of 64 specialty retailers told TDmonthly in spring 2009 that rubber ducks are a best-selling bath toy in their stores. 4/9/2009 (MSRP: $2.99; Age: All Ages)

Shaving in the Tub by ALEX BRANDS

This shaving set comes with a 7-oz. can of Foaming Body Soap, plastic play razor, shaving brush, comb and an unbreakable, child-safe mirror. Awards: iParenting Media Award; Parents Magazine Best Toys of the Year, 2004.
— Retailers have been telling TDmonthly that Shaving in the Tub is a best-selling bath toy since 2007. Other Alex bath toys have been best-sellers in their category for several years as well.
— Shaving in the Tub was specifically named as a best-selling bath toy by three of 39 specialty toy retailers in spring 2007. Only six of 37 retailers surveyed didn’t mention Alex when asked about best-selling bath toys. In March 2009, four of 64 retailers told TDmonthly this product is a best-selling bath item in their stores, selling anywhere from half a dozen to two dozen units each month. Nine of 39 retailers cited it as a best-selling bath product in March 2010.
— As of 4/19/2012, this product had 4.5 out of 5 stars from 5 reviews on Amazon.com. Pros: Fun for younger kids; rinses easily; nice bonding activity for fathers and their kids. Cons: One reviewer said her child had fun with it once, but not a lot of creativity is involved and he lost interest the next time.
— Want this? As of 05/06/2011, this product was available for purchase at My Imagination Station. ( 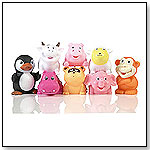 This set of colorful, squeezable bathtime friends includes eight animals that each measure around 2" x 2" x 2". They come in a vinyl bag that zips closed.
— “The little Squirties come in and go right out,” Barbara Paeth-Haas, owner of The Durango Kid in Durango, Colo., told TDmonthly of this strong seller in spring 2009.
— Two of 64 retailers named Elegant Baby’s Bath Squirties as a best-selling bath toy in March 2009. Cheryl Richmond, owner of Punkin Doodles in Havre, Mont., cited sales of 12 per month. 4/1/2009 (MSRP: $16.00)

The ALEX Car Wash is a unique interactive play set for the bathtub that provides enormous play value for ages 2 and up. The set includes the car wash floating platform, three colorful cars, a squeegee and play squirter. Place a car on the rubber conveyor belt, turn the hand crank and watch it move along. Turn the next hand crank to spin the foam brushes. Fill the squeegee with liquid soap to lather up the car, then use the spray squirter to rinse it off. ALEX’s Car Wash is highly engaging and brings pretend play into the tub!
— Two of 64 specialty retailers named this item as a best-selling bath toy in spring 2009. 3/6/2006 (MSRP: $23.99; Age: 2 and Up)

Blow Bubbles in the Tub - Mermaid by ALEX BRANDS

Kids can safely blow bubbles in the tub with this 4.5 fl oz tear-free bubble solution. Designed especially for the tub, the bottle comes with a suction cup bottle holder for preventing spills. The set comes with three bubble-blowing wands and a tray for dipping suction cups.  A diver theme is also available for boys. Launch date: February 2008.
—  Two of 64 specialty retailers named bubbles by Alex-Panline when asked about top-selling bath toys in March 2009. 4/17/2008 (MSRP: $8.99; Age: 2 and Up)

Squirters for the Tub – Garden by ALEX BRANDS

Suitable for ages 6 months and up, this set of colorful garden squirters for bathtime includes a flower, snail, ladybug, bee and butterfly. The products are phthalate free.
— “Most of my bath toys are Alex, and their bath squirters do really well,” Elizabeth Ryan, owner of Tales & Toys in Venice, Calif., told TDmonthly in March 2009, noting that she sells four to six of the squirter sets per month.
— Two of 64 retailers noted strong sales of Alex’s squirters in the bath category in spring 2009.
— “I can't miss on my bath toys for toddlers … the Alex line,” Linda Hanzelko of Timmy’s Toy Chest in Lake Mary, Fla., told TDmonthly in June 2010, citing sales of 30 a month. 4/9/2009 (MSRP: $11.99; Age: 1 and Up)

This little duck in an inner tube is designed to make bathtime fun for kids.
— "I sell a couple of dozen a month" of the Bath Buddies, Fran Anaya, owner of Golden Aspen Toys in Flagstaff, Ariz., told TDmonthly in May 2009. 4/10/2009