Word Games and Activity Sets Entertain Kids on the Road

Melissa & Doug rules in specialty sales of travel games, a recent TDmonthly Magazine poll of 64 retailers showed, taking the cake with Flip to Win games, such as Hangman. Activity books by Klutz and Lee Publications are also popular, as are various types of magnetic sets and play boards. Following are the top-10 most-wanted travel toys and games.

This classic game features an erasable whiteboard with a marker/eraser that can easily be stored on the side, and has no loose components, making it ideal for travel. It measures 0.9” x 10.2” x 8.75”.
— “We sell a lot of … Melissa & Doug flip games, especially Hangman,” Susan Blanton, owner of Pufferbellies in Staunton, Va., told TDmonthly in March 2009. "All the pieces are attached," pointed out Holly Anver, manager of Ages & Stages Toy Box in Golden, Colo.
— Four of 64 specialty retailers named this one-piece version of hangman when talking about best-selling travel toys in spring 2009. Four of 39 retailers echoed that sentiment in March 2010. Overall, 11 percent of those surveyed in '09 cited games by Melissa & Doug. David Ekwall of The Wooden Toy in Wethersfield, Conn., said his store sells eight to 10 per month. 4/9/2009 (MSRP: $12.99; Age: 6 and Up) 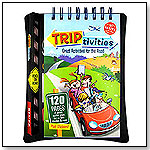 This 120-page activity book includes mazes, word games, puzzles, stickers and more for on-the-go fun.
— “[TRIPtivity] is going to be a big hit because it’s less expensive than the other ones,” Valla Wagner, co-owner of Teaching Toys & Books in Tacoma, Wash., told TDmonthly when discussing the Klutz line in March 2009.
— Six of 64 retailers named products by Klutz as best-selling travel toys in spring 2009. 4/9/2009 (MSRP: $9.95; Age: 8 and Up)

Curious about what is hidden in invisible ink? So is Curious George. Help him discover the hidden world. The Special Pen reveals the invisibly printed pictures. Then match your stickers to the appropriate spot. Each book includes 24 pages of fun, a special pen and stickers.
— Kim Haynes, co-owner of Lollipop Toy Store in Dawsonville, Ga., told TDmonthly in spring 2009 that her store sells about $300 a month of the Magic Pen books, “if I can keep it in stock.”
— Four of 64 retailers named products from Lee Publications when discussing best-selling travel toys in March 2009. 4/9/2009 (MSRP: $3.99; Age: 3 and Up) 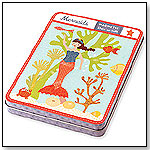 This colorful tin box comes with three sheets of mermaid-themed magnets, including three dolls plus clothing and accessories, and two cards with background images on both sides. The product is printed with nontoxic ink, and the tin measures 7-7/8” x 6 3/10” x 1”.
— “Magnetic paper dolls from Mudpuppy,” are the best-selling travel toy at Twirl in Taos, N.M. “I sold 32 last month,” Owner Molly McMullin told TDmonthly in March 2009.
— Three of 64 retailers named Mudpuppy magnetic sets as top sellers for travel in spring 2009. (

With no complicated instructions or directions, this product is ideal for the younger child. It includes just Wikki Stix and a sturdy write-on/wipe-off board for hours of play, plus a cartoon-style booklet for Mom to read, providing ideas and encouraging creativity. It also comes with zip-lock carry bag for convenient take -along in the car, on a trip or to Grandma's house. The set includes 84 Wikki Stix in two lengths. It is a winner of the Parents' Choice Classic Toy Award.
— “We're doing well with Wikki Stix,” Jason Curtis of Funtopia in Middletown, Calif., told TDmonthly in March 2009. “I've been really motivated to actively sell them because they're U.S. made and everyone is asking for the Bendaroos that are being show on TV.”
— Three of 64 retailers named Wikki Stix as a best-selling travel toy in spring 2009.
— “Wikki Stix are on fire,” said Gail Dunton, manager at Toy Chest in West Hartford, Conn., during an April 2009 survey on best-selling playsets and activity kits. 11/18/2004 (MSRP: $16.95; Age: 3 and Up)

Find It Sports Edition by FIND IT GAMES

Filled with tiny pellets that represent an outdoor sports field, this version of Find It contains more than 40 items that cover more than 35 sports. Things to find include a basketball hoop, football, boxing glove and jet ski. Launch date: Fall 2008.
— Mary Porter, owner of The Curiosity Zone in Ashburn, Va., sells “a dozen or so a month” of the Find It games, she told TDmonthly in spring 2009.
— Two of 64 retailers cited Find It Games when asked about best-selling travel toys in March 2009. 12/5/2008 (MSRP: $20; Age: 8 and Up)

In this word game activity book, kids fill in the blanks about their own family members on topics such as “Family Ghost Stories” and “Famous Ancestors.”
— Barbara Paeth Haas, owner of The Durango Kid in Durango, Colo., said in spring 2009 that Mad Libs sell so well she can’t keep them in stock.
— “A lot of people choose things like Mad Libs for travel specifically because they're very compact and they're entertaining for a while, and they just seem to be one of those perennially popular items,” Gini Wingard-Phillips, owner of Math ‘n’ Stuff in Seattle, told TDmonthly in March 2009. 4/9/2009 (MSRP: $3.99)