By Julie L. Jones
June 2009
Elves and crocodiles ready for battle could be the perfect addition to a child’s toy box this year. TDmonthly’s Holiday Preview of Action Figures also boasts other non-traditional collectible figurines, including tween characters tied to a virtual world, critters that place emphasis on diversity, and designer figurines that can spruce up backpacks and key chains.

Idolz are wearable, stackable, poseable, colorful action figures with interchangeable parts. Kids can customize Idolz by collecting and swapping accessories. "This product has all the qualities of a stylish collectible, while remaining durable enough to play with or display in many different ways. It's designed to be fun and fashionable for both boys and girls of nearly all ages," Damien Noble, president of Idolz Toys LLC, told TDmonthly. Launch date: September 2009. 5/22/2009 (MSRP: $9.99; Age: 4 and Up) 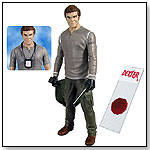 Schleich is building off the success of its popular World of Elves series by introducing eight new hand-painted figurines. Zahor is one of two new fantasy figurines specifically targeted to boys. Launch date: March 15, 2009. (

This handpainted figure is decked out with armor and weaponry. "Hotaling Inc. believes that in a world full of too many passive play options, children should be encouraged to engage in self-driven play. That's why they distribute simple and attractive toys with child-friendly designs that encourage them to actively use their imagination and develop through active play, stimulation and, above all, fun," Brian Shackelton, operations manager for Hotaling Imports Inc., told TDmonthly. Launch date: April 2009. (

These mini collectible designer figures each stand 2.5" high and come with a metal chain, making them usable as accessories for backpacks, bags, purses, key chains and more. The blind-box packaging is designed to encourage customers to be anxious to open the box and find out which figure they purchased. Each POS box contains three units of each Koolby design and two secret Monskey figures. "The affordable MSRP of $3.99 makes Koolby and Friends a great impulse buy item in the current economic climate where customers are looking to make every dollar stretch further," Co-founder Martin New of Saizon told TDmonthly. Launch date: March 2009. 3/23/2009 (MSRP: $3.99; Age: 15 and Up)

Artists can make this action figure of President Barack Obama their own, having the creative freedom to paint, decorate and display him as they wish. The figurine stands 6" tall and has 8 points of articulation. 3/18/2009 (MSRP: $14.99)

Corndog vs. Broccoli by ACCOUTREMENTS

Captain Corndog and Baron Von Broccoli will settle their ongoing feud once and for all in a knock-down, drag-out battle. The winner will become the undisputed feature dish of the kitchen. Captain Corndog stands 5.75" tall and fights for the delicious legion of carnival food. Baron Von Broccoli is 3-3/8" tall and represents the power of produce. Each vinyl figure has bendable arms and legs. They are packaged in an ilustrated window box. Launch date: February 6, 2009. 1/30/2009 (MSRP: $9.95; Age: 12 and Up)

Historically accurate representations of iconic Roman figures including: a gladiator, Emperor Caesar, a Senator, a Noblewoman, a Centurion, a Roman General, a Legionnaire, a section of aqueduct, the Pantheon, the Colosseum, a Triumphal Arch and a Roman warship. Figures measure from 1” to 3”. Hand painted, phthalate and lead free. Ages 3+. Includes a 5 language educational label. Safari Ltd. exceeds all safety standards. Safari Ltd's products are 100% guaranteed. See all the Historical Collection replicas at www.safariltd.com. 1/22/2009 (Age: 3 and Up)

The Corps of the Pontifical Swiss Guard is a small force responsible for the safety of the Pope, including the security of the Apostolic Palace and access to the entrances to the Vatican City. It serves as the de facto military of the Vatican City. The Swiss Guard has served the popes since the 1500s. "Twisting Toyz focuses its attention on those World War II soldiers not produced by other 1:6 scale toy manufacturers. Since the company is based in Italy, their primary focus has been on the WWII-era Italian Soldier, but have plans to expand into other less-known soldiers of that time," Gregory Brown, director of marketing for distributor Cotswold Collectibles Inc., told TDmonthly. Launch date: November 2008.
11/13/2008 (MSRP: $60.00; Age: 14 and Up)

Ages of Action by UNIMAX TOYS

Peanuts appeals to every generation with its simple everyday wisdoms, wit and unique perspective on life. With enduring icons like Snoopy and Charlie Brown, Peanuts has made an indelible mark on popular culture. Happiness is… the Peanuts gang! 11/21/2008

Batman: The Brave and the Bold Deluxe Figures by MATTEL INC.

During each episode of the “Batman: The Brave and the Bold” cartoon, the Dark Knight teams up with a fellow hero, such as Blue Beetle or Aquaman. These figures come with interchangeable accessories so boys can “build up” the figures and “battle up” the bad guys. They can also “change up” the figures by snapping and switching parts. Launch date: Spring 2009. 5/11/2009 (MSRP: $10.99; Age: 4 and Up)