Near the end of July, Flying Pig Games was celebrating its first order via Twitter — direct from a toy store, Dancing Bear Toys in Frederick, Md., that had been introduced to the new Jukem football card game during an in-store demo by the inventor. 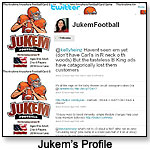 JukemFootball and dbeartoys, as the parties are known in the Twitterverse, had "been following/informing/entertaining/inspiring each other on Twitter for several months," Michelle Spelman of Flying Pig Games told TDmonthly Magazine. And Michelle has "been hoping social media could eventually become a tool where we could actually take orders, give customers updates [and] share news."

She isn't the only one in the toy industry pursuing such a result. On any given day, faithful toy-store owners can be heard “tweeting” their way through cyberspace, chirping about opening the latest shipment of goodies for kids, promoting blogs, doing their part to support local shopping initiatives, or re-tweeting (passing on) important news bits that affect the industry.

The Blue Bunny in Dedham, Mass., started using Twitter this year to announce events, which can set off a chain of networking activity.

“We recently tweeted an event [that was] picked up by fellow tweeter KidoInfo, who blogged a review,” General Manager Janet Reynolds told TDmonthly. “That was picked up by Google Alerts [and was] sent via email to us. We picked it up as a Facebook update and Tweet, which was picked up by other Tweeters.”

And so the circle of social networking life goes.

Although the trend hasn’t reached the majority of specialty retailers yet — a TDmonthly survey of 22 specialty toy stores revealed that only three are actually using Twitter, and only one of those for professional purposes — it has proven a helpful tool for other businesses out there.

Since grocer Whole Foods began tweeting in July 2008 about such things as recalls, promotions and password-driven giveaways in-store, it has attracted more than 1 million followers. According to Multichannel Merchant, Zappos has found the platform to be not only a great way to connect with its employee base and customers, but also an effective recruitment aid, since individuals can get a sense of the corporate culture by witnessing Zappos workers interact with one another online.

It can also be a boon for new businesses.

J.R. Cohen, operations manager for CoffeeGroundz Cafe in Houston, Texas, was initially confused by the concept of Twitter, but today, acknowledges the platform for nearly doubling his customer base, according to a blog post from Chief Experience Officer Erica Grady of Peanut Butter Media.

Because of the personal influence of Twitter, it can become a way to promote a more relational brand. This has been the case for Kodak, at least, whose chief marketing officer, Jeffrey Hayzlett, daily spends time posting to Twitter and Facebook, USA Today reported. 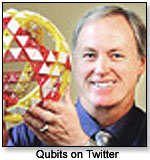 “My pastime hobby is nature photography, which has interested many followers,” said Mark Burginger, CEO of Qubits Toy Company, giving one such instance of a personal slant on a public platform. He has developed a following of more than 5,000 fellow Twitterers since joining Twitter in mid April.

How did he do it?

“It is half technical, half common sense,” said Burginger, who recommends employing second-party applications such as TweetDeck, Twitter Karma and Twellow, which he lauds as the most important, as “it is like the Yellow Pages of Twitter.”

He advocates registering oneself in various applicable categories, as well as searching categories and starting to follow relevant feeds.

“Companies that want to have a Twitter presence need to realize it basically generates a new job position,” Burginger said. “Someone at the company will need to give it time, patience and effort. At least 20 hours a week to have progressive success. My son is a computer expert (works for Apple iPhone division) — he sees the potential to be hired by many companies to manage their online presence. It is a job, plain and simple.”

In some cases, that job is being picked up by PR firms, for which social media is becoming a central and relevant part of new product promotion, especially on a tight budget. Hans Eich, founder of Canadian toymaker Ukoonto, hired BizSolutionsPlus to generate buzz via Twitter and blogging for his new business — toy building blocks made from Canadian maple.

Through the firm's efforts, Eich’s story was picked up by local media, and later, the Toronto Globe and Mail, which led to several business contacts in Canada and Europe.

The big question is, does the Twitter “job” actually pay for itself?

The answer? Not directly, in many cases, although sales aren’t unrealistic.

“Up to now, we have got only a few direct sales from persons that first saw us on Twitter, but that's still fine as this is a free advertising channel,” Imants Caklais, CEO of Paperlandmarks, told TDmonthly in June. “And we have got some interested retailers who hopefully might turn into actual resellers in the near future.”

Emily Ross, founder of BuckleyBoo, has used her company’s Twitter presence to follow moms’ discussions and share developmental articles she comes across online, since her product is a developmental plush toy. She acknowledged that Twitter “is a time sucker!” — and in her case, not necessarily one that contributes to sales.

“As an experiment, I did a one-day, 20-percent off sale with a Twitter code and only posted it on Twitter to see if anyone would use it, and no one did,” she said. “But, Twitter is just one more way to get the brand out there to more people.”

Burginger’s Qubits have definitely received significant exposure. “We have been fortunate to land a few toy reviews, which will help promote our new product further,” he added. 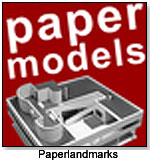 Only time will tell whether brand-building through Twitter ultimately reaches the bottom line, but regardless, many companies quickly become attached to the social connections and business potential it yields.

Some, like Imants, who began Tweeting just this year, already feel that Twitter is “worth every minute.”

Twitter is simple — posting messages in 140 characters or less that answer the question, “What are you doing right now?” But utilizing the platform to the best of one’s professional ability isn’t as easy. Following are tips to provide guidance when tweeting:

DO
• Stake Your Claim. Create an account with your company or brand name on Twitter now, even if you’re not going to use it right away. Squatters have already reserved some brand handles, as they did with Internet domain names.
• Follow With Discretion. Followers are fellow Tweeters who subscribe to your tweets. Don’t feel that you have to follow everyone who follows you; rather, choose to follow Tweeters based on similar interests and valuable content.
• Be Clear About Your Identity. Since networking sites blur the line between personal and professional, it’s important to identify who you represent and your reason for being on Twitter — then make sure your posts reflect those distinctions.
• Humanize Corporate Tweets. While still maintaining professionalism, ensure that your messages don’t duplicate traditional marketing or corporate copy. Make them enjoyable and relevant to your audience. Burginger advised, “Concentrate on wooing your biggest followers. See what they like to Re-Tweet and then give them that material.”
• Generate Traffic. Posting interesting and relevant content for your followers may involve linking to press releases, promotions and recalls, or direct to news on your own website.
• Tweet Carefully. Twitter posts are published to the public, and can be found via Google or other search engines. So, watch your language and be careful that in such brief phrasing, your post isn’t something that could be misunderstood for the worst.
• Guard Your Twitter Stream. If you follow a lot of accounts, the tweets appearing on your homepage can become overwhelming. Check out profile pages before clicking “follow,” and avoid power Tweeters who post nonstop. “If you are building a following for numbers,” Burginger added, “you will at times need to purge your follows. Many people don't follow back and they will keep you from growing your numbers. Delete them with something like Twitter Karma, then start finding new, interesting people to follow.”
• Track Customer Talk. Type in your company or brand name at Search Twitter to find out what’s being said. You can also track customers’ upkeep with your competitors and the industry at large via this tool. Furthermore, use the platform to respond to questions from customers.


DON’T
• Spam. This is a sure way to antagonize followers and create an unwanted reputation with your audience.
• Be Silent. You have a Twitter account, so use it. Your followers expect activity from you on a fairly regular basis. Also, Twitter encourages two-way communication, so get involved in what others are saying.
• Be Excessive or Mundane. Respect your own time and your followers’ time by not submitting too many updates. Also, avoid excessive tweeting of the same content and boring messages that don’t add value to a conversation.