Schylling and Ertl Race Off With Familiar Favorites

In July 2009, TDmonthly Magazine interviewed 49 specialty retailers around the country about their sales in die-cast vehicles.  They said children favored heavy equipment like Ertl’s models of John Deere Tractors as well as familiar city sights such as Schylling’s Police Car and, most popular of all, bright yellow School Buses.  Here are the Top-10 best selling die cast toys. 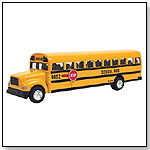 With swing-open doors, a working stop sign and details in crisp black, Schylling’s Die Cast Bus is an effective miniaturization of one of childhood’s most beloved and familiar vehicles.  A pull-back motor sends the bus zooming across floors or tables, and the interior is detailed with rows of seats visible through clear windows.
— “The School Bus is always our best seller,” said Kim Emigh, VP of e-commerce at Growing Tree Toys in State College, Pa., who told TDmonthly during a July 2009 survey that Schylling provides her top-selling die-cast vehicles.
— “The best seller in die-cast would be [the] school bus,” said Michelle Smith, owner of Piccolo Mondo Toys in Portland, Ore.
— Seven of 49 retailers told TDmonthly in summer 2009 that school buses are their best selling die-cast vehicles.
— “Oddly enough, school buses are our best-seller,” said Terri Bracken, owner of Earth Explorers Toys in Zionsville, Ind., when asked about her best-selling die-cast items in July, 2010.
— Four out of 38 retailers specified the Schylling Die-Cast Bus as their top-selling die-cast toy in July 2010. 8/28/2009 (MSRP: $12.99; Age: 3 and Up)

Color Shifters cars go through a transformation when immersed in warm or cold water. Themes include flames, city, camo, racing and color-to-color.
— “The Hot Wheels are the best,” remarked Helen Dean, owner of Toy Safari in Alameda, Calif., when asked about her sales in die-cast vehicles in July 2009.
— Four of 49 retailers told TDmonthly in summer 2009 that Hot Wheels is a top-selling brand, reporting sales of about 100 per month, on average.
― As of 9.21.2010, this product had 4 out of 5 stars from 21 reviews on Amazon.com and was No. 24 on the top 100 best-selling toys and games. PROS: Sturdy and entertaining. CONS: Does not work well indoors. Must be refilled often. 8/28/2009 (Age: 3 and Up)

The die-cast jet features pull-back motor action and a button that activates “take-off” sounds.
— “What does really well in die-cast are the Supersonic Jet Flyers from Schylling — they fly out the door,” Fran Anaya, owner of Golden Aspen Toys in Flagstaff, Ariz., told TDmonthly in spring 2008. “About a month ago, I ordered four boxes (six in each box) and I [already] have to reorder.”
— “My jet planes are my best ones,” echoed Janet Gregory, owner of Over the Rainbow Toy Store in Anchorage, Alaska. “[We sell] probably a dozen or so per month.”
— More than 9 percent of retailers who spoke with TDmonthly in May 2008 named die-cast vehicles by Schylling as their best-selling die-cast. Two of 49 retailers said in July 2009 that Supersonic Jets are their top-selling die-cast. 6/9/2008 (MSRP: $4.99) 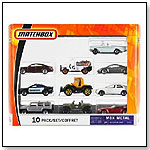 An assortment of 10, 1:64 scale cars with realistic details and working wheels, this set of Matchbox cars can stand alone or accompany a collection, parking garage or road set. Familiar vehicles like family sedans, emergency vehicles, sports cars and construction equipment are cast and painted with realistic details to engage imaginative playtime.
— Of 49 retailers contacted during a July 2009 survey, three told TDmonthly Matchbox cars are their best-selling die-cast vehicles. 8/28/2009 (MSRP: $12.99; Age: 3 and Up)

With its glossy paint of bright red and double sets of deeply treaded tires, Case’s heavy-duty farm equipment is rendered in careful detail in Ertl’s 1:64 scale model. The interior of the tractor’s cab is sculpted faithfully and visible from the clear plastic enclosure. The chunky wheels are functional.
— Two of 49 storeowners told TDmonthly in July 2009 that Ertl provides their best-selling die-cast toys. 8/28/2009 (Age: 3 and Up)

In eye-catching black and white, Schylling’s die-cast model of a police car is ready to respond to any emergency.  Zipping along on working wheels and a pull-back motor, the cruiser  has 9-1-1 printed on the side.
— “They're wonderful sellers,” Michelle Sahr, owner of My Little Red Wagon in Stow, Ohio, said of her Schylling die-cast vehicles in July 2009. Sahr said the police car is a favorite in the line.
— In an August 2013 survey, two out of nine retailers told TDmonthly that police cars were their best-selling type of die-cast toy. 8/28/2009 (MSRP: $6.99; Age: 3 and Up)

This licensed vehicle is outfitted with folding mirrors and a cab that tilts up to reveal the engine. The container  features a hinged rear and is removable,  so that other similar units can be put in its place.
— “Their deliveries are good, accurate,” Manager Rosie Morris of Whiz Kid Toys in San Luis Obispo, Calif., told TDmonthly of this preferred vendor. “They’re quick to fix problems, if we have any. And the quality is great.” Nearly 4 percent of 52 retailers named Bruder as a favorite supplier in late fall 2008.
— “They sell pretty evenly across the board. It's a strong category for us,” Michelle Deutschmann, owner of Kaleidoscope Toys in Falmouth, Mass., told TDmonthly of her die-cast vehicles, 75 percent of which she orders from Bruder, during a July 2009 survey. 12/19/2008

Beloved by children and farmers alike, the John Deere brand is well known for its durability and reliability. In Ertl’s 1:16 scale line of die-cast replicas, the tractor models’ details are faithfully rendered and finished with glossy paint and decals. The tractors roll freely on heavily treaded wheels ready for pretend-play or collector display.
— In July 2009, one of 49 retailers surveyed said John Deere tractors are the best-selling die-cast toys. 8/28/2009 (Age: 3 and Up)

This model all-terrain SUV is fitted with opening doors, free-rolling wheels and tires with rubberized tracks. From the front grill to the rear bumper, familiar details are worked carefully in a 1:87 scale.
— “Siku is the best,” said Barbara Fineblum, owner of Barston’s Child’s Play in Baltimore, Md., reporting sales of about 150 Siku die-cast per month during a July 2009 survey. 8/28/2009 (Age: 3 and Up)

From Carrera’s Evolution line of slot car racing sets, Night Racers is a two-car set blending 1:32 scale cars with innovative 1:24 scale track so that both 1:32 and 1:24 scale cars can be raced on this equipment. The Night Racers set includes two model cars, 18 track pieces, guardrails, two speed controllers, replacement contacts, instructions and other accessories.
— One retailer out of 49 told TDmonthly in July 2009 that Carrera manufactures the store's top-selling die-cast toys. 8/28/2009 (Age: 8 and Up)