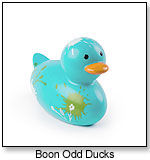 Folkmanis was one of the many toy vendors at this year’s ABC Kids Expo in Las Vegas — a show that over the past several years has progressively attracted an audience beyond the traditional juvenile products market.

“There are more exhibitors and more toy companies, which is the main reason I decided to jump in. Seven years ago, it wasn’t nearly as big. Not too many trade shows are growing,” Dan Folkmanis, who attends about 30 trade shows per year, told TDmonthly Magazine.

Although the show has repeatedly been ranked as one of the 50 fastest-growing trade shows in the country by Trade Show Week, it did see a downturn of more than 200 booths this year — 3,303 versus 3,569 in 2008. The pre-registered number of retailers held steady, though, with more than 2,600 stores for a total of over 5,800 buyers.

“I’m pleasantly surprised at how many small retailers are at such a big show,” said Kathy Link of first-time exhibitor Imagination Creations.

She sold more infant items than she had expected, and at high price points — even her knit hat combos that run $70 at retail did well.

Melissa Moog, CEO of Itsabelly Baby Planners and president of The National Baby Planner Association, noticed a larger turnout in the “Naturally Kids” sector of the expo.

“There is a huge surge of companies focused on creating non-toxic and eco-friendly feeding, diapering, toy, baby gear and skincare products,” she told TDmonthly.

Green Toys, nevertheless, picked up “exposure to new markets” — in particular, baby boutiques that only invest in a few toy lines for their stores, according to the company’s Cameron Passmore.

And HaPe Intl. opened new accounts with baby and juvenile department stores who appreciated the company’s environmental focus, according to Consultant Robin Lehnert.

“We’ll definitely be back. The traffic has been very strong,” she told TDmonthly.

Unfortunately, strength in numbers didn’t expand to all areas. Toy booths tended to be hit or miss, sometimes depending on the recommended age range of the products offered. 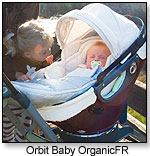 Although Aeromax was seeing its pre-existing customers, come day three, VP of Sales and Marketing Mel Davis was admittedly “a little disappointed in the traffic.”

Companies like Wikki Stix, with a product that’s been a best seller in independent stores but is for older than the toddler set, struggled to find an audience at ABC Kids.

For shoppers seeking key baby items, however, there were bundles of gear at every turn.

Heller found that while it seems impossible for another nursing cover to enter such a saturated market, other areas that are also up against stiff competition thrived on novelty. As she put it, “The companies that were innovative were very, very innovative.”

“Orbit Baby has a fantastic product to start [and] didn't really need to do anything,” she told TDmonthly, “and yet they're still revolutionizing their own product” with seating changes and other innovations.

Valco Baby, Baby Jogger and Phil & Ted’s were among other stroller companies she thought did a fantastic job of introducing new features and contributing to a broadening need in today’s market — products with multifunctional capabilities that keep a parent from having to buy additional items for consecutive children.

Safety was another hot theme at this year’s show, according to Moog, who believes retailers need to be more informed about the products they’re selling due to CPSIA standards. Partially as a result of the legislation, more manufacturers have created products that are free of PVC, BPA, phthalates and other toxins, and are including package labels that reflect that makeup.

This 11-oz., two-in-one sippy to straw bottle is equipped with a stainless steel body, a thermo plastic rubber sleeve for insulation and grip, a straw-shaped spout to support physical and speech development, removable handles, a tapered waist with ribbing, a dust cap, a travel plug to prevent leakage, and a straw and straw adaptor to easily convert the Safe Sippy2 as a child grows. 10/12/2009

Dandelion’s ReUsables are made from a formula derived primarily of corn-based bioplastic. The ReUsables include divided plates, bowls and utensils for toddlers. Each ReUsable is durable and lightweight for use at home or on-the go. Designed with ease-of-use in mind, the divided plate keeps foods separate, the bowl has deep sides to reduce spills, and the utensils are ergonomically designed for baby’s tiny hands. Plates and bowls are sold in packs of two. The utensil pack comes with four spoons and four forks. "Dandelion’s line of ReUsable tableware is made primarily from renewable and sustainable corn-based bioplastic, which is free of bisphenol A and phthalates, and offers an inspired alternative to conventional plastic," Anthony Pinkett, account executive for Productivity PR, told TDmonthly. The line received an iParenting Media Best Product for 2009 Award and the PTPA Media Seal of Approval. Launch date: April 15, 2009. 6/11/2009 (MSRP: $7.99; Age: All Ages)

Made of food-grade stainless steel, this  12-fl.-oz. sippy cup features a cap and spout constructed from BPA-free polypropylene, has a large mouth for simple cleaning and to hold ice cubes, and is 100-percent recyclable. It is available in seven colors, plus natural Sport. 10/12/2009 (MSRP: $17.95)

Kids can slip their hand through the opening of this soft, slinky ferret puppet's chest to work his mouth. There's an additional rear pocket for extra wriggling. Launch date: August 4, 2009.
Awards: A TDmonthly Classics Award for being an all-time favorite toy.
— As of 7/21/2011 this product had 4.8 out of 5 stars from 4 review on Amazon.com.
— In late Spring 2011, eight out of 15 retailers surveyed said that puppets from Folkmanis were best-sellers in the category. "They have all kinds, and people can get odd things, like a ferret," Lisa LeStrange, owner of Lucky Duck Toys in Wayne, Pa., told TDmonthly. She sells 10-15 Folkmanis puppets each month. 6/29/2009 (MSRP: $29.99; Age: 3 and Up)

This clinically tested castile soap is made with pure, organic ingredients and is free from phthalates, artificial preservatives and synthetic surfactants. It comes in three sizes: 50 ml, 160 ml (shown) and 1 liter. 10/12/2009 (MSRP: $10.95)

Little Autos are child-sized vehicles made of maple with natural wood wheels painted with a vibrant burst of color and sweet graphics. They are available in four colors: lime green, blue, red and yellow, and accented with one of two whimsical patterns: checkers or blossoms. Little Autos are an "exceptional value for a modern, wood vehicle. This is available in a display with 8 autos in 4 colors," Robin Lehnert, marketing manager for Hape Intl., told TDmonthly. Launch date: 2009. 6/29/2009 (MSRP: $4.99; Age: 0 to 3) 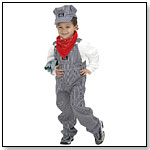 Every little “Casey Jones” will love the chance to take the controls wearing this great Jr. Train Engineer gear.  The durable “poly/cotton” fabric is comfortable and long-wearing.  This outfit includes the matching engineer’s cap, matching leather-feel gloves (not with 18 month) and red bandana.  Also available in small and large adult sizes ($63.95) and infant size (18 mos, $33.95, gloves not included). 9/15/2009 (MSRP: $43.95; Age: 2 to 14)

With 24 sticks in a rainbow of colors (red, orange, yellow, green, blue and purple), kids can construct shapes and figures without the use of glue or other materials. Each Wikki Stix is 8” long.
- Sallie Kashiwa, owner of Timbuk Toys in Denver, told TDmonthly in late summer 2009 that her store sells about 80 Wikki Stix sets per month.
— Wikki Stix have been consistent best sellers for the last two years at The Parent-Teacher Store & Toys Too in Louisville, Ky., Owner Kimberly Kopatz told TDmonthly in fall 2009. 9/30/2009 (MSRP: $3.25)