Melissa & Doug. We could almost stop there, based on responses from 38 specialty toy stores across the United States, but there are other top-selling wooden toys, too. In addition to Melissa & Doug’s puzzles, blocks, food and craft kits, RC2’s Thomas & Friends Wooden Railway, Manhattan Toy’s Automoblox, HABA’s baby rattles and Plan’s line of infant toys are also performing nicely for independent toy shops. See the top-10 best-selling wooden toys below.

See NEW wooden toys No manufacturer paid to be included in this article. All products listed were designated by editorial staff without regard to the company's relationship with TOYDIRECTORY.com/TDmonthly Magazine.

Kids can use the icing tube-shaped dry-erase markers to color four wooden cupcakes that come with a baking tray, cupcake sleeves and decorative wooden candles. The package measures 10.5" x 13.25" x 3.13".
— Play food sets and cutting food from Melissa & Doug were named as a best-selling wooden toy by seven of 38 retailers in February 2010. "The Melissa & Doug cupcake set did really well," Lesa Smith of Whiz Kid Toys in San Luis Obispo, Calif., told TDmonthly.
― Michael McCollum, owner of Learning Express in Hoover, Ala., told TDmonthly in spring 2010 that the Bake and Decorate Cupcake Set is his best-selling playset. “One of my employees absolutely loves it,” he said of what helps drive sales.
― “All year, [the best seller] is food sets from Melissa & Doug,” said Bill Rayment, owner of Toy Crossing in Harbor Beach, Mich., when asked about his top-selling playsets and activity kits during an April 2010 interview.
― Six of 43 retailers listed Melissa & Doug as their top supplier of playsets in April 2010. (

These wooden, magnetic dolls come in a box with multiple clothing options and include stands for playtime.
— Five of 38 retailers told TDmonthly in February 2010 that Melissa & Doug magnetic dress-up items are a best-selling wooden toy in their stores. 2/24/2010 (MSRP: $19.99; Age: 3 and Up) 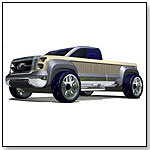 Complete with interchangeable parts like the rest of the Automoblox collection, the T900 features a chrome grill and bumpers, all-terrain tires on chrome wheels, and an overall sleek, sporty design.
— Four of 38 specialty retailers named Automoblox as a top-selling wooden toy in February 2010. "Automoblox do really well," said Stacy Solie of Leapin' Lizards Toy Co. in Bend, Ore., citing sales of about 2 dozen per month. 2/22/2010 (MSRP: $45.00)

Brightly colored with water-based stain (no lacquer) rattles are sure to keep baby happy and busy. Whether babies want to shake it or spin it they’re going to enjoy it.
Awards: Creative Child Magazine Toy Award 2010
— Three of 38 specialty retailers cited rattles by HABA as a best-selling wooden toy in their stores in February 2010. 2/19/2010 (MSRP: $14.00; Age: 0 to 2) 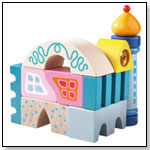 Gobblet Junior brings the award-winning, fun game of strategy to the whole family. Gobblet Junior plays just like Tic-Tac-Toe except that players can gobble up their opponents and move their pieces around the board. The first to line up three pieces in a row wins. Fun, strategy, memory and surprise are always part of the game.
— Two of 38 specialty toy retailers named Blue Orange when discussing best-selling wooden toys in February 2010. 11/28/2005 (MSRP: $19.95)