By Alison Marek
July 2010
When Jeanette Lauture opened Aunt Jean's Toys and Treats in Montclair, N.J., in 2007, she found herself drawn to retro toys that reminded her of those she had played with as a child. By putting them out on the floor, she learned that other adults were drawn to them for nostalgic reasons and that kids became curious enough to want them, too. It took about a year, she told TDmonthly Magazine, to get a feel for the right mix to attract a steady clientele. Math games and multicultural items are among the hits in her store.

Watch a video interview with Jean, below, then scroll down to read about and watch some of her best sellers.

Get the Flash Player to see this video. 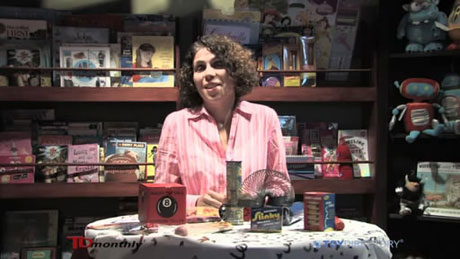 Following are some of the toys that involve the girls and boys who visit Aunt Jean's:

Draw a line and the vehicle will follow! It is more than just a race set; it’s a craft activity that encourages children to be creative allowing for many ways to play. With the official Doodle Track marker and the included play mat, the Doodle Track car will follow a continuous line drawn on the mat by the marker. The Doodle Track car also comes with colorful, stick-on decals for customization. Set includes: Doodle Track Car, Washable Marker, Stick-On Decals, Playmat Track and Instructions.

This sleek ride-on is fueled by cambering motion — the rider pushing his or her legs against the front bar, to the left and right. It has a hand brake and features an extendable design to host riders up to 6' tall. Maximum recommended weight is 150 lbs.
— Learning Tree Toys, Games & Books in Oklahoma City, Okla., sells about a dozen EzyRollers per month, Owner Patti Tepper-Rasmussen told TDmonthly in fall 2009.
— Jackie Roy, owner of Learning Resources Toy Magic in Fort Walton Beach, Fla., told TDmonthly in late 2009 that she brought in five EzyRollers on trial on sold out in a week and a half.
— Two of 37 specialty retailers cited the EzyRoller as a top-selling ride-on in spring 2010. “The EzyRoller, by far, continues to be the best,” Christine Osborne of Wonder Works in Charleston, S.C., told TDmonthly in March 2010, reporting sales of a couple dozen per month.

Kids can go hog-wild with Arnold the Snoring Pig, a cute, quirky companion sure to put a smile on anyone’s face. Arnold’s oversized snout, curly pink tail and sleepy expression make him a cheerful gift for animal lovers of all ages. Press Arnold’s hoof and the 16” snuggly swine comes to life, moving his ears, mouth and body as he happily snores the day away. Arnold includes 3 AA batteries. “Like all GUNDFun characters, Arnold stands apart from other animated plush because of the quality of his design – his movements are impressively fluid, and he is still a soft, huggable companion,” GUND Marketing & Licensing Manager Shallu Chhabra told TDmonthly. Launch date: February 2007.

Shells crack open to reveal six "egg-stra" special colorful chicks. Press down gently on their heads to hear them peep. Take the eggs out of the carton for "egg-ceptional" shape sorting fun. (

Mighty Beanz are collectible and playable versions of the old Mexican jumping beans. These little characters can do tricks, race each other down along and come in more than 100 fun characters with sports, ocean and zoo themes and more. Accessories are sold separately.
— As of 8.12.10, this product had 4 out of 5 stars from 28 reviews on ToysRUs.com and was listed No. 13 in best-selling toys and games. PROS: Easy to play, entertaining, interactive. CONS: Some parents felt this product did not hold children's interest. ( 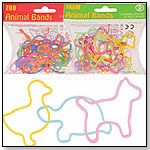 These colorful rubber bands function like traditional bands  but feature fun animal shapes when not holding something together.
— "We got 270 packages on Thursday and were sold out by Saturday morning. High school, middle school and elementary school kids are all buying them," Katie Rook, owner of Be Beep A Toy Shop in Columbia, S.C., told TDmonthly in fall 2009.
— Editors Note: This item is very similar to the Animal Rubber Bands by Eastern Accent Int'l, first reported by TDmonthly in 2005. ( 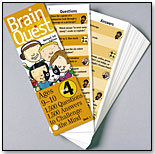 With two decks, 75 cards per deck hinged together by a plastic bolt, and a 150-page book with full-color illustrations throughout, this small version is as big mentally as its older big brother.
— Sesame Street Magazine named it one of the Top 9 Products for kids, and Money magazine called it one of the 50 Best Values in the USA.
— Said Darren Webb of HomeschoolingSupply.com, “My own 3-year-old son, Jackson, really likes his Brain Quest book … the illustrations capture his interest and the format is really convenient.”
—The latest editions have 50 percent new material keyed to what students in grades 1-7 need to know today. ( 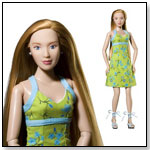 Houda celebrates the beauty and richness of her French and Lebanese background. Her hobbies are baking, cooking, reading and exercise. Her friends describe her as giving, always the first to try new things and she tends to see the humorous side of life. (

This digital camera is attached to spy sunglasses. Users can take photos with the secret handheld remote, then download them to a computer. This product is designed to encourage imaginative and abstract thinking skills. (

This kit includes a 7" pump and 20 balloons. Kids and teens can use the pump to fill the balloons, then let them go and watch them zoom high into the air. (

This light-up silver disco ball is also an audio speaker. When an MP3 player or iPod is plugged in, the multicolored lights flash to the beat of the music. A line-in cable is included.
THIS PRODUCT IS NO LONGER AVAILABLE (

These plush dolls are designed to teach children practical skills like buttoning, zipping, tying and snapping. The 15" pirate comes with a parrot pal, sword and eye patch, and the 15" princess includes a butterfly, flower and crown. (

This two-to-four-player addition and subtraction game takes kids on a journey through Sum Swamp. Players make their way over the crocodile shortcut and through the endless loop by adding and subtracting the numbers rolled. (

Marble Run by HOUSE OF MARBLES

Made of heavy-duty plastic with snap-together tubes and chutes, this kit includes plenty of marbles for hours of building and rolling. (

The Chat Pack contains 156 cards, each featuring a question meant to get people talking. This game is designed for dinner parties, family gatherings, car trips, and classroom activities. (

Retailers: Did you know you can broadcast TDmonthly Toy Videos from your website? Manufacturers: Find out how a TDmonthly Video attracts buyers. Videography and editing by Steffen Nieman.