By TDmonthly Staff
July 2010
July's Videos of the Day for Week 3 feature a fast-paced (if you're any good) Spot It! game from Blue Orange, an utterly perplexing maze game from PlaSmart, a crime scene with fingerprints and all, and more.

Made in the USA, this soap is organic and contains ingredients including safflower and/or sunflower, palm and coconut oils; lavender, geranium and ylang ylang essential oils; jojoba oil and rosemary extract. It's designed to be gentle and soothing for the skin. ( 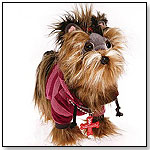 This Yorkie plush features two-tone modacrylic fur in tan and black and wears a rock-and-roll-inspired vest. Her fur is pulled into a "ponytail" decorated with a bone-shaped hair accessory. Peas is available in plush and handbag versions. ( 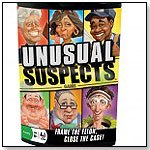 In this game, everyone plays the role of detective and suspect. At the beginning of the game, each player blindly draws a card from the deck, and the character on the card becomes their secret identity. The dealer deals the cards and roll the dice to set up the crime scene. Players can “solve the case” by matching their six fingerprint cards to the six fingerprint dice, and can "tamper with the evidence” by drawing a new card, or re-rolling one of the dice. (