Why Extinction Can Be Profitable

Of 23 specialty store owners surveyed by TDmonthly Magazine's regional corresondents in 4Q 2010, only 18 carried books or comics.  While books are rarely a big hit for these toy-store owners, recent sales have been particularly unsatisfying, said John Naisbitt, owner of Thinker Things in Solana Beach, Calif. : “Hardcovers really took a dive with the ecomony.”

Nevertheless, a few classics (including the fairly recent “Wimpy Kid” series) stood strong and a new book with the provocative title “All My Friends Are Dead” should appeal to all ages.

Here's what kids are reading across the nation:

All My Friends Are Dead by CHRONICLE BOOKS FOR CHILDREN 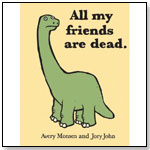 This book about a lonely dinosaur was penned by Avery Monsen and Jory John. It covers the downside of being everything from a clown to a cassette tape to a zombie. Cute and dark all at once, this hilarious children's book for adults teaches valuable lessons about life while exploring each cartoon character's unique grievance and wide-eyed predicament. From the sock whose only friends have gone missing to the houseplant whose friends are being slowly killed by irresponsible plant owners (like you), All My Friends Are Dead presents a delightful primer for laughing at the inevitable. Hardcover, 96 pages.
— "We've sold 24 in half a month," said Gwen Bowden, manager of Doodlehopper for Kids in Springfield, Va. "It just came out and we can't keep it." 12/21/2010 (MSRP: $9.95)

The Lost Hero by HYPERION BOOKS FOR CHILDREN

Where the Wild Things Are by HARPERCOLLINS PUBLISHERS

This hardcover classic written and illustrated by Maurice Sendak follows the imaginative journey of a little boy named Max who is sent to bed without his dinner.
— Two of 44 specialty retailers named "Where the Wild Things Are" when asked about best-selling books in late 2009. Bill Sartain, co-owner of Tutoring Toy in Salt Lake City, cited sales of about 24 per month.
— Maryalice Miner, co-owner of Miner's Doll & Toy Store in Ocean Springs, Miss., told TDmonthly in a December 2011 survey that this book, along with other evergreen titles, sell well year round. 12/7/2009 (MSRP: $17.95; Age: 2 to 8) 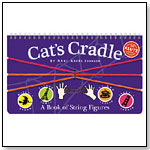 Written by Anne Akers Johnson, this illustrated book provides painstakingly clear instructions for five different string figures. Attached to the book is a tie-dyed string loop – all you need to bring is ten fingers. The four-millionth copy will sell any day now and, to prepare for that happy occasion, Klutz has given the book a brand-new cover. 12/21/2010 (MSRP: $9.95; Age: 6 and Up)

Diary of a Wimpy Kid by ABRAMS BOOKS

Published under the Amulet Books imprint, this “novel in cartoons” by Jeff Kinney chronicles the experiences of an unlikely hero, Greg Heffley, who finds himself thrust into middle school, where undersized weaklings share the hallways with kids who are taller, meaner and already shaving. Greg tries to use his best friend’s popularity to his advantage, kicking off a chain of events that tests their friendship in hilarious fashion. The book features approximately 300 black-and-white illustrations.
— It is “a completely unique approach to middle-grade fiction — combining hilarious diary-style narrative with web comic art,” Valerie Ralph, in publicity for Abrams Books, told TDmonthly. Launch date: April 2007.
- “For the younger reader, the best seller is “Diary of a Wimpy Kid” by Jeff Kinney,” Jessica Wood, buyer for Northshire Bookstore in Manchester Center, Vt., told TDmonthly in November 2008.
— Barbara Fineblum, owner of Barstons Childs Play in Rockville, Md., told TDmonthly in a December 2014 interview that Diary of a Wimpy kid books are best-sellers at her store. 1/5/2007 (MSRP: $12.95; Age: 8 to 13)

In this 32-page hardcover, Fancy Nancy and her Explorers' Club, which includes friend Bree, take a rather fancy look at the outdoors. They explore butterflies, flowers, trees, birds and more. The book is written by Jane O'Conner and illustrated by Robin Preiss Glasser. Launch date: March 31, 2009.
— Five of 44 specialty retailers referenced the "Fancy Nancy" series when discussing best-selling books in late 2009.
— In a December 2011 survey about books, 3 out of 12 retailers told TDmonthly that Fancy Nancy books were their best sellers. Maryalice Miner, co-owner of Miner's Doll & Toy Store in Ocean Springs, Miss., told TDmonthly that, "The Fancy Nancy books have been really big." They sell a half dozen copies or more each month. 12/7/2009 (MSRP: $12.99; Age: 4 to 7)

This latest Knuffle Bunny tale from Mo Willems follows Trixie and her family as they travel to Holland. Is Trixie a big enough girl to travel without her favorite toy? Readers will find out in this illustrated book that mixes photos with cartoons. Hardcover, 52 pages.
— Two of 23 retailers said the Knuffle Bunny books were among their best sellers in 2010.
— "We sold 149 from 10/3 to 11/19," said Barbara Fineblum, owner of Barston's Child's Play in Baltimore. 12/21/2010 (Age: 4 to 8)

Gyo Fujikawa has created ten little babies in this rhyming counting book. During each episode, one little baby finds its own bliss (from playing to marmalade smearing) until just one tiny baby is left. The last page reads: One little baby, alone having fun. He became a grownup, and then there were NONE!
— This is one of Gladys Griffin's best-selling books for 2010 at the Main Street Toy Shop in Columbus, Ga. 12/21/2010 (MSRP: $5.95; Age: 3 to 7)