QR Codes: What They Are and How to Use Them

By Sarah Hanley
January 2012
What are QR codes? 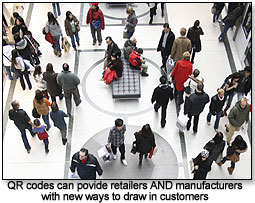 Quick response codes, invented in 1994, are square, two-dimensional barcodes that can hold several hundred times more information than traditional barcodes. Smartphone users can download free applications in order to scan QR codes. Each QR code is linked to a web page that gets pulled up on the Smartphone after it has been scanned. With this technology, QR codes are able to create a bridge between static and interactive media.

In an article on Mashable, Hamilton Chan, CEO and founder of the QR generator company Paperlinks, said, “Although QR codes won’t be the only technological option for hyperlinking in the real world, I believe they’ll soon be recognized as one of the best-suited options to connect items in the physical world to the Internet.”

In the past, if a consumer wanted to research something they saw in a store or an ad, they would have to try to remember it so they could look it up online later. QR codes and Smartphones eliminate these steps, allowing consumers to gain more information right when they want it.

QR Codes on the Rise

Jumpscan, a personal QR code generator, said that between July 2010 and December 2010 QR code scanning increased by more than 1200 percent. In June 2011, digital marketing research company comScore reported that more than 14 million Americans had scanned a QR code on their cell phone. This accounted for 6.2 percent of Americans with cell phones. Nearly half of these people scanned QR codes in printed magazines and newspapers.

The second most commonly scanned QR codes were on product packaging, showing that QR codes can provide a new outlet of communication for toy and game companies and their customers.

QR codes in storefronts or on TV were scanned far less. This is something to consider when creating commercials or displays; however, due to QR codes being a relatively new technology, the data may just mean that QR codes are rare in those locations.

Patch Products, a manufacturer of family games, has been using QR codes on their packaging to help demonstrate how its games work. When scanned, the QR codes direct customers to a YouTube video of the game being played. Lisa Wuennemann, the director of marketing at Patch Products, said that this can help shoppers come to a final decision on which game is best for them. “QR codes are becoming an increasingly popular marketing tool, allowing us to provide a helpful and convenient resource to our customers while they are shopping,” Wuennemann said. “We are very excited about this new way to quickly put the power of our website and product videos into consumers’ hands when they need it most.” Although Wuennemann could not say how many times their QR codes have been scanned, some of their videos have been viewed nearly 4000 times. 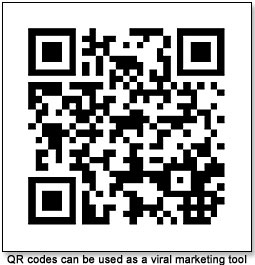 According to Chris Brogan, business communications consultant for brands such as PepsiCo, General Motors and Microsoft, companies need to be aware of where QR codes are taking their customers. It is very important that the QR codes are linked to smartphone-friendly pages. “If you deliver someone to a page that requires they squint, scroll, and otherwise manipulate content in an uncomfortable way, that’s the first experience that person will have with your company,” Brogan said in his article, “Mobile Marketing isn't a QR Code.” Once the consumer has taken the time to scan the QR code, the page they have been directed to must also be worth their time. Brogan suggests using links that will enhance the customer’s experience and keep them interested in the company.

Depending on what content your QR codes are linked to, they can be used to accomplish many different goals. Instead of going to a generic homepage, a QR code can send a customer to a page with product reviews, or more information on the product. In some cases, it might make sense to send the customer to a page with creative content. For example, if a toy or game involves different characters, a QR code could link to a mini series or web comic using those characters. On game packaging, a QR code could link to a forum that includes alternative ways to play the game, provided by game fans and the company alike.

The LA Times reported that during the 2011 holiday season, Sears and Kmart created “shopping walls,” featuring photos of toys with QR codes next to them. When scanned, the QR codes allow shoppers to buy the toy right on their phone, making holiday shopping as quick and stress-free as possible. These temporary shopping walls were located at malls, bus shelters, subway stations, airports and movie theaters. Similar shopping walls have been very successful in other countries.

QR Codes can be a fun viral marketing tool for smaller retailers too. Retailers can use a free QR code generator and link a code to a page on their website, promoting a special offer or discount. The codes can then be printed on fliers or stickers and distributed around town.

The Downside to QR Codes

Some consumers might be wary of using QR codes due to a fear of security risks. Security News writer Meg Shannon wrote in an MSNBC.com article that, “Consumers who scan these squares and comply with permission requests could get more than they bargained for in the way of security and privacy problems.” Scammers can use QR codes to gain access to users’ personal information or send them viruses. As consumers become more tech-literate, the threat of falling victim to a QR code scam decreases. After all, there is a big difference between scanning a QR code on a flyer or website of unknown origin and scanning one from a trusted, reputable company.

Dave Weineke, writer for AdAge, wrote an article called, “Why Marketers Shouldn't Waste Their Time With QR Codes.” In his article, he argues that QR codes are a marketing fad that will soon be over. “QR codes can actually impede the conversation,” Weineke says. “First, you have to assume not everyone knows what they are, so you have to explain how they work. Then, you just hope people are willing to download the app and go through the hassle of getting it to work. Then and only then will they be exposed to whatever brilliant website you have put together.” This might be true, but a learning curve is to be expected with many new technologies. It will take some more time before marketers can really know how much value consumers see in QR codes.

Steve Huscher, co-founder of The Four Clowns Game & Toy Company, said that they came up with an idea for a QR code game during one of the company’s brainstorming “circuses.” One of the “clowns” brought up the topic of QR codes, and Huscher thought, “This is a new technology that really seems like it’s going be a part of the future.” The Four Clowns all agreed, and came up with The Codigo Cube (see below). 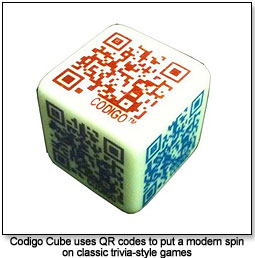 The Codigo Cube is a normal sized die with QR codes on each face, instead of numbers. Thanks to the QR code technology, this one small game piece allows anyone with a Smartphone to play a trivia game with up to 100 players. Players take turns rolling the die, and scanning the QR code that is faced up. The game is over once someone has correctly answered a question from all six sides of the cube, with each side representing a different category of questions. Since the trivia related game play is entirely online, The Codigo Cube can be constantly updated with new questions. Huscher said that the Four Clowns are currently working towards making the Codigo Cube customizable by adding new categories and difficulty levels.

The Future of QR codes

While overall use of QR codes is on the rise, there are still many people who have yet to try them. In places such as Japan, QR codes have become commonplace, but the U.S. is still far behind. Huscher is aware that while QR codes are gaining in popularity, not everyone has caught on. “It really depends on the person. A lot of people are really familiar with them, and they’re becoming more and more prevalent…It’s a really simple concept.” Huscher said that Smartphone are starting to come with QR code scanners already loaded, which will encourage people to give QR codes a try. “There’s lots of room to grow,” Huscher said.

Codigo Cube is a socially interactive trivia game that uses players' web-enabled camera phone, a free app, and a patent-pending 2D bar-coded die. Codigo Cube is updated with new questions daily. Whenever breaking news happens Codigo Cube gets updated. Playing is fun and easy. Players simply download a free QR code reader for their phone, then scan any side of the cube. Roll the cube, scan the code, and answer the question from a list of four multiple choice answers. Guess correctly and re-roll. Guess wrong and the cube is passed to the next player. Launch date: October 2011.
Awards: TDmonthly Top Toy Award, January 2012; 2011/2012 The Toy Man Award of Excellence; 2011/2012 The Toy Man eChoice Award; 2011 The Toy Man Top 50 Toy Of The Year Award.
— Why it won: Codigo Cube is harnessing new technology for an innovative and inexpensive new game. Players simply scan the QR code on the die with their Smartphone to access a trivia question online. The trivia questions are constantly being updated, so the game never gets old.
— As of 9/21/2012 this product had 4.7 out of 5 stars from 23 reviews on Amazon.com. Pros: Easy to use; more variety than a traditional trivia game because questions are always being updated. Cons: Needs to be played in a well-lit area or the QR code readers can scan the codes properly. (