By Justina Huddleston
March 2012
When TDmonthly Magazine asked our reporters to find the most exciting new products for boys at the 2012 New York International Toy Fair, they delivered, with a list that ranges from a replica Ferrari pedal-car, to a scuttling robotic Scarab, to a fierce looking Darth Maul action figure. See the new toys our reporters discovered at Toy Fair below, and don't miss their finds for Girls and All Kids, too!

Regal Elite launches its new "Glove Force" technology, which allows users to direct their 'copters by turning their wrists left or right, with the help of a small thumb-controlled throttle. Launch date: Spring 2012. 2/14/2012 (MSRP: $49.95)

Hot Wheels wall tracks are taken to the next level with this set, which includes a spiral elevator and fun demolition elements like a car chomper and a moving saw. Attached to the wall with 3M command strips, to avoid ruining walls. Launch date: June 2012.

MagnaMobiles are designed for kids to exercise their creativity. Put the pieces together and take them apart to create new and inventive vehicles. Magnamobilles roll, carry, lift, dig, drop and spin much like the real life machines they are modeled after. With multiple connectors on every piece, kids will have fun creating their own custom vehicles. All MagnaMobiles are made from high quality beech wood with a non-toxic finish. Launch date: January 2012.  (

The HEXBUG® Scarab is an exceptionally high-speed, mechanical, beetle-like robotic bug that skitters around on six angled legs. The high energy micro robotic creature propels itself forwards and backwards, and is capable of popping from its back to its feet if placed upside down. The Scarab’s lifelike behavior is eerily mesmerizing to watch and interact with. Packed with advanced design and engineering, each Scarab has an inner body loaded with robotic intelligence, protected by a hard, transparent exoskeleton casing. The HEXBUG Scarab moves so frenetically that it is nearly impossible to follow without a slow motion camera. The combination of the HEXBUG Scarab’s six specially designed angular legs, coupled with its lightning speed, make it easy to for it to propel against obstacles in its path and flip over if caught on its back. Three button cell batteries are included. Available in an assortment of five translucent colors including: Green, Blue, Orange, Black and Red. Launch date: November 2012. 2/8/2012 (MSRP: $14.99; Age: 8 and Up)

Two of boys' most popular toys - dinosaurs and vehicles - have been brought together to create a unique 2-in-1 play experience with VTech's Switch & Go Dinos. Each toy transforms from a dinosaur to a vehicle and back again in a few simple steps. Each comes equipped with an LCD screen for customized animation, dinosaur and vehicle sound effects and educational dinosaur facts. The line features seven unique and collectible dinosaur toys. Launch date: February 10, 2012.
— As of 10/30/2012 this product had 4.6 out of 5 stars from 43 reviews on Amazon.com. Pros: Durable; easy for kids to make the transformation happen; sounds change between dinosaur noises and car noises, depending on which form the toy is in. Cons: One reviewer said the toy was too noisy. 2/10/2012 (MSRP: $15.99) 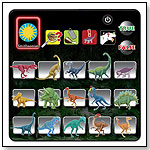 Sleek high tech looking tablet with 21 smooth touch icons. Tablet has 4 activities to learn about Dinosaurs and 15 dinosaurs to discover – just like in the Smithsonian Museum. earn their names, hear their sounds, learn what their diet was and more fun information. Launch Date:  September 2012. 2/12/2012 (MSRP: $29.99; Age: 3 and Up)

Barbecue Party an action-packed game for preschoolers. It’s all about action-reaction as players try to load up the grill with all kinds of funny food before it pops a gasket.  Kids have to be very careful not to jiggle the grill when they lay an ear of corn, a tomato, or any of the other food pieces on top because it can jump at any time. Includes 16 plastic food pieces, 18 cards, & 1 pair of tongs/pliers. Launch date: June 2012. 2/10/2012 (MSRP: $19.99; Age: 4 and Up)

The new Game where the goal is to be the first millionaire! Stack pairs of assets, to cover your valuables before they are stolen by other players! Defend your assets with like cards in your hand or Gold or Silver Wild Cards! Easy to learn in just minutes, with layers of strategy for years of fun! This will be a your new Family Favorite! Loved by all ages. Kids, Parents, and Grandparents can all enjoy a great time together. Even dedicated, competitive, gamers get a kick out of the quick action, and the drama. Enjoy the emotional response as the value of your Assets increase each time they are stolen. Steal them back to gain even more value. Before they are stolen again, cover them with more Assets to protect them. Watch out though, if your new top set is stolen the one below it is in jeopardy again. Keep building up your assets till you become the first millionaire. 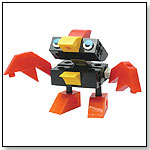 Each Monster Village package contains over 90 block pieces to create two monsters with movable joints. The included assembly instruction comes in comic booklet form featuring the stories of each of the unique characters. Launch date: April 2012. 2/3/2012 (MSRP: $25.00; Age: 5 and Up)

The Tribute Kendama is a Japanese wooden skill toy that challenges hand-eye coordination, focus, balance, and creativity. Enjoyed by millions in Japan, its only recently been introduced into the USA thanks to KendamaUSA. " It is the only Kendama designed so that the cups can never fall off the handle, which is the #1 customer complaint with copy-cat brands," Jeremy Stephenson, president of Kendama USA, told TDmonthly. Launch date: January 2007.
Awards: 2012 ASTRA Toy of the Year Award Nominee
— David Castillo, vice president of The Red Balloon Toy Store in Salt Lake City, Utah, told TDmonthly in a November 2014 survey that Kendamas, especially ones from Kendama USA, are one of their store's best-selling toys. 2/8/2012 (MSRP: $22.00; Age: 9 and Up) 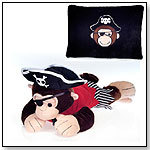 The Joker is up to his usual tricks, and he must be stopped. Superman, Batman, Green Lantern and The Flash team up, calling on their special powers – X-ray vision, the Batarang, force fields and lightning speed – to dodge The Joker’s gags and stop him in his tracks before he reaches the getaway car. The Fun House game board is packed with preschool play power: a wacky rolling ball, secret messages, and a launching Batarang will draw young super heroes into the action. Launch date: 2012. 2/8/2012 (MSRP: $19.99; Age: 3 and Up)

IVI three dimensional carpets encourage imaginative and creative play. These carpets are an alternative to today's fast-paced, technology-based toys. These unique carpets are designed by a Turkish architect and mother of two and were developed to promote independent thinking and a traditional process of discovery through play. Carpets are 100% polypropylene, hypo-allergenic, anti-static, stain resistant and made from non-flammable material. 3x5 feet. 2/8/2012 (MSRP: $149.99; Age: 2 and Up) 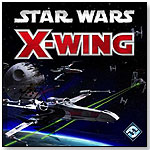 X-Wing is a tactical ship-to-ship combat game in which players take control of powerful Rebel X-wings and nimble Imperial TIE fighters, facing them against each other in fast-paced space combat. Featuring detailed hand painted miniatures, X-Wing recreates exciting Star Wars space combat throughout its several included scenarios. The X-Wing starter set includes everything players need to begin their battles, such as scenarios, cards, and fully assembled and painted ships. Launch date: Q2 2012. 2/8/2012 (MSRP: $39.95; Age: 13 and Up)