Social media sites like Facebook connect users with old friends, new acquaintances and everyone in between. However, studies are revealing an inverse link with online connections and deeper, face-to-face relationships.

"Social media, and the new emphasis on the importance of 'multitasking,' have helped drive a wedge between family members," says psychologist Gregory L. Jantz, author of #Hooked: The Pitfalls of Media, Technology and Social Networking (www.drgregoryjantz.com). 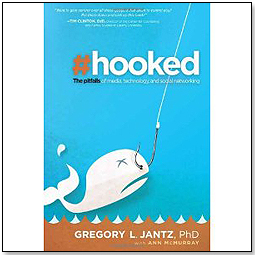 Norwegian researchers recently developed a test for networking sites, called the Bergen Facebook Addiction Scale, which likens inordinate amounts of time spent on the networking site to drug and alcohol abuse. The test measures how often people use the site, if they do so to forget their problems and how using the site negatively affects their personal and working lives.

Researchers have found the following groups of people most at risk for Facebook addiction:
Research has found that people become less social the more time they spend on social sites, and they tend to get less done while multitasking because they do not focus on completing one task at a time, Jantz says.

Facebook has also been linked to low self-esteem, especially in girls. A study by the Girl Scout Research Institute found that "Sixty-eight percent of girls have had a negative experience on a social networking site, such as having someone gossip about them, or being bullied." Of the 1,000 girls surveyed for the study, 46% also said that they think social networking causes jealousy between friends, hurting their personal relationships.

The results were the same even when researchers quizzed participants' actual Facebook friends. "You might think that a real friend would care if you're expressing negativity," psychologist Amanda L. Forest told NPR, but the negative posts turned off even close friends.

"When people abuse drugs and alcohol, they are trying to feel better, yet they are worsening their situation. We're finding this is also true for those who spend excessive amounts of time on social networking sites," Jantz says. 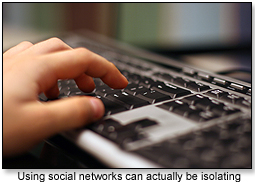 One may think that Facebook is only a concern for parents of kids age13 and older, due to the Children's Online Privacy Protection Act (COPPA). COPPA mandates that websites must receive parental consent before a kid under the age of 13 creates an account. Facebook (and other websites) has chosen to avoid this complication altogether by banning children under 13 from using Facebook.

However, Pew Research released a report in 2010 that showed 45% of 12-year-olds who go online used social networks, while 44% of teens reported lying about their age to use a social network — meaning parents of children of all ages should safeguard their children by monitoring their time spent online.

Parents should monitor their own time online as well, to ensure it's not further limiting the already shrinking amount of time available with their children. "Perhaps the hardest hit from social media addiction is the family unit," Jantz says.

He suggests parents ask themselves these questions when gauging their kids' media usage:

• How much time do your kids spend with various forms of media? There are plenty of distractions from homework. Estimate how much time your child spends with the television, Internet, social networking sites, cell phone, Blu-rays and game systems. The more time spent with media, the lower a child's academic performance, according to a Kaiser Family Foundation study.

• How much time do your kids spend with you versus online media? Remember, simply being in the same room isn't necessarily interacting. The less the scales tip in favor of human-to-human interaction, the more likely there may be a problem.

• Do you know how each device works and how it can be used? Familiarity with your children's gadgets gives you a better perspective of what their habits may be like.

• What are the consequences of their tech habits, and what should be changed? Make a list of the good and the bad consequences of your family's technology use. After comparing the two lists, consider changes that can turn negatives into positives. The good news is that parental involvement can effectively prevent kids from signing up for accounts when they are underage. An EU Kids Online survey found that "children whose parents placed no restrictions on social network sites...were far more likely to join a social network site than those who were forbidden, suggesting some effectiveness for parental influence," according to a study in the peer-reviewed journal First Monday.

Parents should make a concerted effort to get involved in their child's online activities, especially with reports that Facebook is considering making its site available to the under-13 set. "Facebook is testing several options, including technology that would link a parent's account to their kids, or add controls to let a parent decide who their kids could 'friend' or what apps they download," reported PC Mag.

As Facebook considers allowing younger children to use the site and social media becomes more common for kids of all ages, parents would do well to remember this:

"Technology continues at its accelerating pace, and we are in uncharted territory," Jantz says. "Increasingly, social networking infiltrates our personal lives, but we need to remember that it is created to serve us, and not the other way around."