By TDmonthly Staff
July 2012
We want you to see the toys we see, so you can determine if they're right for your store! Check this space every weekday to see brief video clips of new and specialty products.

In the spotlight today? See your sales grow tenfold with Tenzi from CARMA GAMES 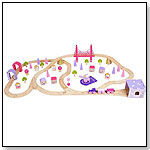 This line of retro stunt-show toys includes cars of three different colors. They can jump, do wheelies, and the driver figures come out to play. There's a human cannon ball for the play figures that can really be shot, and there are parachutes as well. (

The Wall Coaster is NOT an ordinary marble run. Kids can just stick it to the wall and let their imaginations soar. The Wall Coaster uses the basic laws of physics and gravity to enable hours of fun and imaginative play. Plus, it is super easy to use. What makes the Wall Coaster different? The Wall Coaster can be applied to almost any vertical or horizontal surface. The new add on parts allow the user to build all kinds of crazy contraptions.
— Dean Smith, owner of JaZams in Princeton, N.J. told TDmonthly in late Spring 2011 that he sells between eight and 10 Wall Coasters each month.
— Want this? As of 05/10/2011, this product was available for purchase at JaZams (

The three dimensional skill based toy is orbiting to the next level with the Astrojax MX. This version presents the futuristic, aerodynamic SPORT, and the eye catching POP as the first ever Modular Astrojax. What’s this mean? Not only are these two styles vibrant with color, but with a simple pull and click kids can easily change out their mantles, cores, string buds, and strings. Launch date: January 2012. (