Check the items out below, and decide if they're a good fit for your store!

Gem the Deer by TYNIES

Tynies are glass collectibles, introduced in 2008 with 40 different styles. New styles are released three times per year. Each Tynies has a name — each name is three letters. First edition Tynies come on a cardboard base that can be removed by soaking in water for about one minute. Because Tynies are handmade, they vary in color and shape.
— Christine Osborne, co-owner of Wonder Works in Charleston, S.C., told TDmonthly in an October 2011 survey that Tynies are her best selling keepsake item. They sell about 200 per month in each store.
— In a Summer 2012 survey, two out of 10 retailers told TDmonthly Tynies were their best selling collectibles. Elmer Carranza, manager of Doodlehopper 4 Kids in Springfield, Va., told TDmonthly that they sell 8-10 Tynies each month.
— In an August 2013 survey Dean Smith, owner of JaZams in Princeton, N.J., told TDmonthly that Tynies are one of the store's best-selling collectible lines. 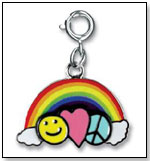 A winning design from High Intencity's Design-A-Charm contest, the Peace Love and Happiness charm was designed by Emily R. from Pleasantville, NY and rendered in vibrant detail in an enamel charm measuring approximately one inch.10 % of the proceeds from the sale of this charm will go to the World Wildlife Fund on behalf of its designer.
— “Charm It! works really well in this area,” said Blanche Snipes, owner of Tree Top Toys in Redmond, Wash., when asked about her top-selling items for tweens.
— Two of 44 retailers listed Charm It! as a best-selling item for tweens during a September 2010 survey.
— Katie Rook, manager of Be Beep A Toy Shop in Columbia, S.C., told TDmonthly in an October 2011 survey that High Intencity charm bracelets are their best selling tween item.
— Dean Smith, owner of JaZams in Princeton, N.J., told TDmonthly in a Summer 2012 survey that they sell between 40 and 50 Charm It! charms each month. (

This three piece set comes with a mystery foal, whose color is a surprise. This set features a grey stallion and a black mare, and their foal remains hidden in its stall until the package is opened. A fun visual lesson in horse genetics, the foal's coat color and pattern will be based upon the coat color and patterns of its parents.
— Denise Magstadt, owner of Imagination Station in Whitefish, Mont., told TDmonthly in a Summer 2012 survey that they sell 10 Breyer Horses each month.
—  Sari Powacek from Doll House & Toy Store in Scottsdale, Ariz. told TDmonthly in an August 2013 survey that Breyer horses are one of her store's best-selling collectible lines. 4/24/2012 (MSRP: $8.99; Age: 4 and Up)

These large plush Uglydolls have a mini Uglydoll in their pouch. Launch date: May 2012.
— Shana Hack, owner of Moon Rabbit Toys in Santa Fe, N.M., told TDmonthly in a Summer 2012 survey that they sell a couple dozen Ugly Dolls each month, though sales have slowed slightly.
— Bill Sartain, owner of Tutoring Toy in Salt Lake City, Utah, told TDmonthly in a Fall 2012 survey that Ugly Dolls are one of their best selling tween products. 12/29/2011 (MSRP: $20.00; Age: All Ages)

Part of Hagen-Renaker's new miniature lineup for 2007, 2.75"-high Silky Sullivan is a classic figurine designed by renowned sculptress Maureen Love. First issued from 1962 to 1971, Silky Sullivan has been reissued for 2007 in memory of Love, who recently passed away.
— Hagen-Renaker figurines were cited among the top-selling collectible items in the store of Lisa Bennett, owner of Peacock Feather in Needham, Mass.
— Bennett told TDmonthly in summer 2007 that she sells about 60 to 70 units a month of the line’s collectible items.
— Cynthia Phillips Strinich, owner of Phillip's Toy Mart in Nashville, Tenn., told TDmonthly in a Summer 2012 survey that Hagen-Renaker glass animals were among her best selling collectible items. (

Seventeen inches tall, Alexander the Trademark Bear is covered in rich, gray-tipped alpaca fiber. His jointed limbs move and his paws are padded with Belleseime Ultrasuede. He wears a medallion inscribed with the 1947 version of Steiff’s recognizable logo, and is the second in a series of bears commemorating different versions of the evolving logo.
— Michelle Smith, owner of Piccolo Mondo Toys in Portland, Ore., said in July 2009 that Steiff is one of her collectible mainstays. “We're considering doing a Steiff event to really let people know we have it.”
— Three of 49 retailers told TDmonthly in summer 2009 that Steiff plush is their top-selling collectible line. 8/18/2009 (MSRP: $398.00; Age: 14 and Up)