When TDmonthly Magazine asked specialty retailers about their best selling action figures, seven out of 10 said they don't sell them at all.

If you do decide to carry them, you can see the action figures that sold best for other retailers below. 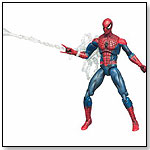 When he was 14 years old, Peter Parker was bitten by a spider that had been irradiated in a nuclear experiment. Something in the spider's venom changed him, over night, from the nerdy kid he'd been to something else entirely. Given incredible strength, speed and stamina, he reveled in his power. The tragic death of his uncle threw Peter's good fortune into fierce perspective, giving him direction. From that day on, he vowed to battle evil wherever he could find it as The Amazing Spider-Man. Detailed with defined "muscles", pose this Spider-Man action figure in a battle-ready pose with his "spinning" web accessory aimed at the enemy! Fully articulated, he's ready to make a stand in your collection. Action figure comes with a "spinning" web accessory and a S.H.I.E.L.D. file with a secret code.
— Mike DiAndrea, manager of Hardware Toys in Paoli, Pa., told TDmonthly in a Summer 2011 survey that he sells 6 Spider-Man action figures from Hasbro each month, and that they're his best-selling action figure.
— In a Summer 2012 survey Elmer Carranza, manager of Doodlehopper 4 Kids in Springfield, Va., told TDmonthly that they sell a dozen Spider-Man figures each month. 8/9/2011 (MSRP: $6.99; Age: 4 and Up) 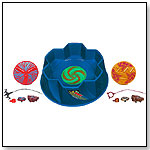 With a BEYSTADIUM™ arena to fight in and exclusive battle tops and launchers, kids can start their dueling practice as soon as they're set up. Customize the BEYSTADIUM with three battle cores: the Zip Core forces straight-line movement, the Chaos Core brings chaos to the tops' movement, and the Deflector Core brings craziness because it affects right-spin and left-spin tops differently. With the tournament grids and official rule book, kids will be ready to do battle . Set up the exclusive GALAXY PEGASUS™ and METEO L-DRAGO™ tops for a launching, spinning attack.
— As of 10/18/2011 this product had 4.4 out of 5 stars from 7 reviews on ToysRUs.com. Pros: Fun; good starter kit. Cons: Expensive.
— As of 10/18/2011 this product had 3.5 out of 5 stars from 22 reviews on Amazon.com. Pros: Bey Media L-Drago is is a left-spinning top and is great; beys come assembled. Cons: not very durable; top has to be set just right before spinning, otherwise it won't go.
— In a Summer 2012 survey Deran Muckjian, owner of Catch a Falling Star in Lexington, Mass., told TDmonthly that they sell 40 Hasbro Beyblade figures every month. 10/19/2011 (MSRP: $44.99; Age: 8 to 10)