Great kites don’t change. Part of their appeal is their carefree timelessness. “What changes is,

every year a new crop of kids needs to learn how to fly kites,” said Ken Conrad, owner of Great Winds. Innovative kite designs, such as Great Winds’ Frustrationless Flyer and Catch the Wind’s (ToyDirectory) Spinsock, have remained a vital part of the industry for over 20 years without 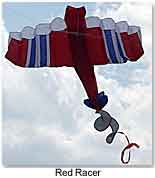 major changes. While one popular kite can literally make a company, other kite trends can come and go like the winds they ride on. 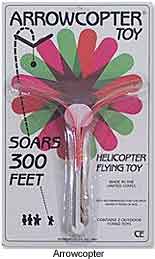 2004 is going to see a continuation of these trends. The traditional kites will still have a strong showing, especially the ones with the best flight reputations and the lowest price points. “The high-end stuff isn’t there as much,” said Rob McDaniel, general manager of Catch The Wind. The market is shifting from hobbyists to people buying for one-time use and spending accordingly. Similarly, according to Chris Schultz, general manager of NewTech Kites, more emphasis is being put on packaging, perceived value and mass production. “There is much less cottage manufacturing in the U.S. and Europe,” said Schultz.

Cottage industry is still a strong source of decorative kites, however. “More and more kite stores are asking for ‘Chinese Kites,’ which are made one at a time in the traditional handicraft manner, like they have been for thousands of years,” said Fay Chou, president of Proma Connections. “They not only fly well, they also make impressive decorations because of their vivid colors and the arts & crafts flavor.” Catch the Wind has also found that more of its business is coming from home and garden shops, where not only kites, but flags, banners and windsocks are popular wind industry items. Many companies are also taking advantage of their promotional value, said Catch the Wind’s McDaniel. “Companies have been ordering antenna wind socks with their logos screened on,” he said.

The fastest growing area in the current wind industry are traction kites--flying toys designed to pull 3-wheeled buggies, surfboards and snowboards with tremendous speed and jumping capability. Most traction kites are made by traditional sporting goods companies, but PowerLine Sports switched from traditional kites and found it to be “a larger dollar market than traditional kiting,” according to company President Brian Smith. “It’s a pretty dynamic market,” he said. “People who get involved start with something stock, gain experience and start souping it up with lighter, flashier parts, bigger toys for the boys.” Active People’s most popular item, accordingly, is not a kite, but parts and accessories. People are also continually experimenting with new kite-propelled items, like rollerblades and sleds, turning traction kiting into a year-round sport still growing in applications and popularity.

Smith and others noted that traction kiting is bringing more people to traditional kiting. “Whenever there’s kite surfing you see traditional kites popping up as well. It’s beautiful, so it always draws an audience, and the people who aren’t ready to go out on the ocean start thinking about kites as cool again,” he said. “That’s a big part of these trends, if something is cool or not.”