By Justina Huddleston
February 2013
Stanford University-educated engineer Debbie Sterling was frustrated by how few women pursued careers in engineering. In a toy store, when she noticed a glaring lack of science and math-based toys made for girls, she knew it was a gap in the toy industry she was destined to fill. 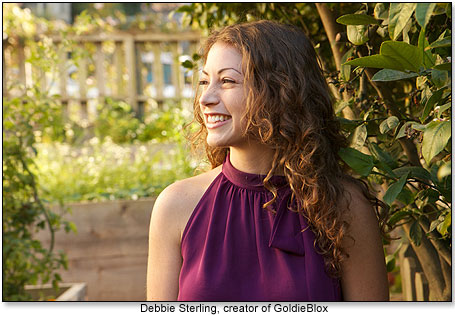 Q. What career path did you originally envision for yourself? Did you ever anticipate working with children's products?

A. I actually thought I would be a jewelry designer and start my own jewelry company. I enjoyed jewelry making in college because it was like engineering on a micro scale. I never anticipated becoming a toy maker, but once I came up with the idea for GoldieBlox, I simply couldn't resist it. Now, it feels like I was born to do this.

Q. What aspect of the toy industry most surprised you when you first started?

A. When I first started, I hadn't been to a toy store in years and was expecting to find more construction toys for girls than when I was a little girl. I was shocked to see the amount of gender-stereotyping -- it felt like I was back in the 1950's. I couldn't find barely any engineering, math or science toys that were designed for girls. I knew instantly that I had a major gap to fill.

Q. How did you come up with the idea for your first product?

A. I started a tradition with my group of entrepreneurial friends in San Francisco called "Idea Brunch", where we'd get together once a month, make breakfast and give each person 5 minutes to pitch the group on their latest hair-brained idea on how to change the world. During one of those sessions, the idea for "construction toys for girls" came up after one of my female engineer friends and I were complaining about the lack of women in the field. She owed her passion for engineering to playing with her older brothers' hand-me-down Legos. Everyone in the room got excited about the idea, but I knew it was my life calling. 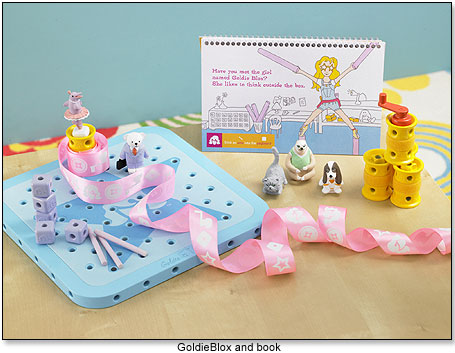 A. I spent about a year sketching ideas and doing research on the toy industry, gender differences, cognitive development, children's play patterns, etc. in my spare time while working at a full-time job. I became so obsessed that I quit my job in December 2011 to focus full-time on the endeavor. That month, I came up with the "aha" idea of a book series + construction toy starring "Goldie Blox," the girl engineer character. I trademarked the name immediately and began writing, sketching and prototyping the first story with thread spools, ribbon, clay wooden dowels and pieces I could find around the house. Two months later, I had a working prototype and started testing it with kids. I went into the homes over over 40 families and visited 3 schools, and constantly made improvements to the prototype along the way based on what I was learning. In April, I took those final iterations and turned them into CAD files that I 3D printed. I also hired a professional sculptor to create the character figurine models. In May, I sent the CAD drawings and figurines to a factory in China to have them create samples and price quotes for mass manufacturing. I approved the samples and initiated the tooling process. In June/July/August, I did the final edits and illustrations to the book. I drew and painted each page by hand. I also filed for patents and copyright. In September, I launched GoldieBlox on Kickstarter and raised enough funds for a production run. In October/November, I worked with the factory to finalize the production samples, getting the tolerances of each hole just right. Now, we are in production.

Q. What were the top two or three most significant obstacles you had to overcome to achieve success, and how did you do it?

A. The biggest obstacle so far as been in getting the product "just right". It's sort of a Goldilocks story, funnily enough. In one sample, the holes were too large, In the next, they were too tight. It's been a struggle to get them "juuuust right". Because our factory is in China, there is a long delay in between sample revisions and it's not always easy to communicate such minor tweaks. We were running out of time and still hadn't gotten it "just right", so I booked a last-minute flight to China and visited the factory in person to make sure nothing got lost in translation. That finally did the trick. The other major obstacle that I faced was when I first started out, I was afraid to show anyone my ideas in fear they would get "stolen". I holed myself up like a hermit in my apartment, drawing, sketching and tinkering by myself for hours. This made me kind of lonely and depressed. I finally snapped out of it by attending a social entrepreneurship conference called StartingBloc. There, I met incredibly inspiring entrepreneurs who are changing the world. They all had the same advice: to put yourself out there, find the right mentors, collaborate, brainstorm and network. It seems so obvious now, but this was the impetus I needed find people to collaborate with and start acting like a true entrepreneur, instead of a lonely inventor. That literally changed everything. 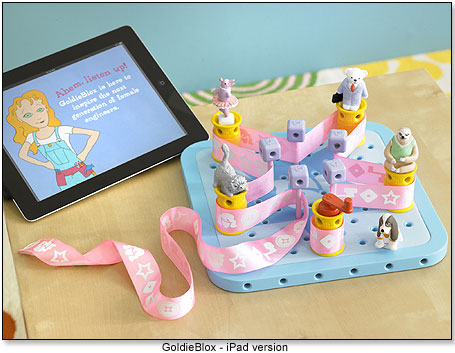 Q. If you had to start over, what would you do differently?

A. I would have gone to visit the factory in China much earlier in the process and given more precise instructions on the manufacturing of the product. Basically, I would have used more engineering! This would have saved a lot of time and I will now be doing this moving forward.

Q. What were the top two or three best pieces of advice you received and from who?

A. "Make the best product you possibly can and everything else will follow. The most important thing is that the girls fall in love with your product. That should always be your top priority." - Terry Langston (founder of Pictionary).

Q. What  unique quality makes your product better than your competition?

A. GoldieBlox has a lot of unique qualities that make it superior to the competition. For one, it stars a female engineer character that is a much-needed positive role model for girls in a world of stereotypical fashionistas, princesses and beauty queens. It also incorporates storytelling, which leverages girls' verbal skills as a way to get them interested in building. The stories are humorous and relate to girls' lives. They take the intimidation factor out of engineering to make it fun, accessible and relevant. They also encourage right-brain, left-brain thinking -- developing verbal and spatial skills simultaneously. The construction toy pieces are inspired by common household objects and craft items. They have a modern color palette, soft textures and curved edges, all things that innately appeal to girls. The building pieces are dynamic (a spinning belt drive, moving vehicle, pulley elevator, etc.) and they are used to solve problems in the narrative. Other construction toys tell kids "what" to build with an instruction manual. GoldieBlox gives the "why" - making the building challenges solve problems that help Goldie's friends. This is the context that's been missing and the key to getting girls engaged in building. 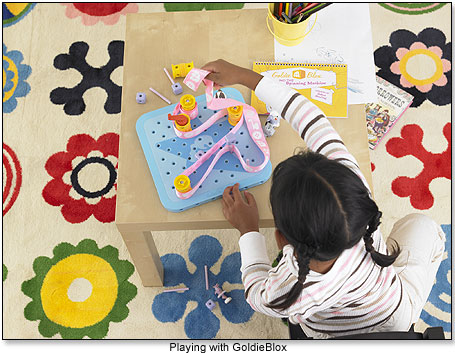 Q. How do you hope your product/s will affect children's lives?

Q. What does your company have planned for 2013?

A. New building stories, new characters, new construction pieces and new engineering principles! We currently have the next two book+toys in development, along with corresponding e-books that will have animation, narration and tutorials to truly enhance the toy experience. We also have some (top secret) products in store for the 2013 holiday season.

GoldieBlox and the Spinning Machine by GOLDIEBLOX INC

This is the first book & construction toy in the GoldieBlox series. Meet Goldie, her beloved dog, Nacho, Benjamin Cranklin (the cat with an attitude), Katinka (the dolphin ballerina), Phil (the sloth) and Flavio (the bear from Brazil). Help Goldie figure out how to build a belt drive to spin everybody. Includes: (1) storybook, (1) pegboard, (5) wheels, (10) axles, (5) blocks, (1) crank, (1) ribbon, (5) washers. Launch date: April 2013.
— In a May 2014 survey Suzi McMullen, manager of Doodlehopper 4 Kids in Falls Church, Va., told TDmonthly that Goldieblox was a best-selling construction toy in their store. "When we had it, we sold out all 24," she said.
— In a September 2014 survey, LyndaBlankenship from Smart Toys & Books in Knoxville, Tenn., told TDmonthly that Goldie Blox are one of the store's best-selling science & nature toys. 12/10/2012 (MSRP: $29.99; Age: 5 to 9)