Bath time can be tricky, but these fun toys make it fun, not fussy. TDmonthly interviewed retailers to find out about their best-selling bath toys. You can learn more about their top products below.

Shaving in the Tub by ALEX BRANDS

This shaving set comes with a 7-oz. can of Foaming Body Soap, plastic play razor, shaving brush, comb and an unbreakable, child-safe mirror. Awards: iParenting Media Award; Parents Magazine Best Toys of the Year, 2004.
— Retailers have been telling TDmonthly that Shaving in the Tub is a best-selling bath toy since 2007. Other Alex bath toys have been best-sellers in their category for several years as well.
— Shaving in the Tub was specifically named as a best-selling bath toy by three of 39 specialty toy retailers in spring 2007. Only six of 37 retailers surveyed didn’t mention Alex when asked about best-selling bath toys. In March 2009, four of 64 retailers told TDmonthly this product is a best-selling bath item in their stores, selling anywhere from half a dozen to two dozen units each month. Nine of 39 retailers cited it as a best-selling bath product in March 2010.
— As of 4/19/2012, this product had 4.5 out of 5 stars from 5 reviews on Amazon.com. Pros: Fun for younger kids; rinses easily; nice bonding activity for fathers and their kids. Cons: One reviewer said her child had fun with it once, but not a lot of creativity is involved and he lost interest the next time.
— Want this? As of 05/06/2011, this product was available for purchase at My Imagination Station. (

Take the helm of the Green Toys™ Submarine for a nautical journey to help protect the planet. Submerge it underwater to explore the terrain at the bottom of the tub, and let it resurface to scan the horizon in search of the next earth-friendly adventure. Made in the USA from 100% recycled plastic milk jugs that save energy and reduce greenhouse gas emissions, this sturdy watercraft features a spinning rear propeller, a flat bottom for added stability, and the classic handle and wide-mouth opening combination for plenty of scoop-and-pour fun. The cabin can be opened for easy cleaning, while the whole vessel is also dishwasher safe. No BPA, phthalates, PVC or external coatings, and also meets FDA food contact standards. Packaged with recycled and recyclable materials and printed with soy inks.
— Teresa Derry, owner of Annie's Toy Chest in Cocoa, Fla., told TDmonthly in an April 2013 survey that this was the store's best-selling bath toy.
— In a March 2015 survey, two out of 10 retailers told TDmonthly that Green Toys is their best-selling brand of eco-friendly toys.
— Taka Andrews, owner of Miller's Toys in Mamaroneck, N.Y., told TDmonthly in an April 2015 survey that the Green Toys submarine was one of their store's best-selling bath toys. 4/22/2013 (MSRP: $14.99)

Paint in the Tub by ALEX BRANDS 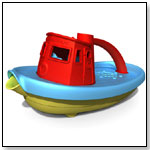 Designed for ages 6 months and up, this toy for bathtubs and mud puddles is made in the USA of recycled plastic milk containers. It floats, is equipped with a spout on the front for scooping and pouring water, and is free of BPA, PVC, phthalates and external coatings. It comes in packaging made of recycled or recyclable materials and featuring soy inks. Launch date: March 2010.
— In an April 2012 survey about bath toys, two of eleven retailers told TDmonthly the Tugboat from Green Toys was their best seller.
— Kristen Dolle, Manager of Playthings Toy Shoppe in Louisville, Ky. named the Green Toys Tugboat as a best-seller in the bath category when surveyed by TDmonthly in late Spring 2011.
— Want this? As of 05/06/2011, this product was available for purchase at Playthings Toy Shoppe. (

Ten cups to stack or nest are great companions to water and sand play.
— Patti Tepper-Rasmussen, owner of Learning Tree Toys, Games & Books, Inc. in Oklahoma City, Okla., told TDmonthly in an April 2013 survey that these stacking cups are among her store's best-selling bath toys. 4/22/2013

Mr. Bubble Foam Soap will whip up bath time fun. Kids can use their imagination to make all kinds of fun shapes with silly floating foam. Safe and gentle, it washes thoroughly and leaves skin soft and smooth.
— Katie Roo, manager of Be Beep A Toy Shop in Columbia, S.C., told TDmonthly in an April 2012 survey about bath toys that they sell about a dozen units of Mr. Bubble Foam Soap each month.
— In an April 2013 survey about best-selling bath toys Kate Noreen, manager of MudPuddles Toys & Books in Sherwood, Ore., told TDmonthly that "Mr. Bubble stuff has sold really well. It's that classic name, but it's thick foam so it's really fun to play with." 4/20/2012 (MSRP: $3.50)

Rub-a-dub-dub, there’s a big duck in your tub. Schylling Toy Company believes that bigger is better, which is why this duck is 12” long from beak to tail. The Large Rubber Duck comes with an assortment of hats for virtually any occasion a child might have in mind: rain hat, bonnet and sailor’s hat.
— "Rubber duckies by Schylling" were bath best-sellers according to Tristan Hewitt, manager of Dragon's Toy Box in Seattle. Another agreed.
— Both retailers noted that ducky sales are sporadic throughout the year.
— Mike DiAndrea, manager of Hardware Toys/Big Smile Toys in Paoli, Pa., told TDmonthly in an April 2013 survey that they sell about 5 of this toy each month, making it a best-seller in the bath toy category. (

Bath time just isn’t complete without our classic rubber duck. Made in Spain of all-natural, phthalate-free latex, the Original Rubber Duck comes in 7 fun and goofy styles.
— Dean Smith, owner of JaZams in Princeton, N.J., told TDmonthly in an April 2013 survey that they sell 10 of the Original Rubber Duck each month, making it the store's best-selling bath toy.
— David Stelzer, owner of Shananigans Toys in Baltimore, Md., told TDmonthly in an April 2015 survey that Rubber Duckies by Rich Frog are their store's best-selling bath toys. "It's a cute item and the best rubber duck," he told us. 6/6/2008

The 3-in-1 Music Island includes three real instruments for the tub on a fish-shaped floating island. It's part of the famous Tub Tunes' line of bathtub musical instruments for toddlers. The Island includes a drum, xylophone and Octopus Jingle Shaker. It also comes with two mallets, music sheets and a music holder.
— “Alex is where it is at for bath toys. We sell at least two a week,” said Alison Cox, owner of Animal Quackers in Raleigh, N.C.
— “Alex bath toys do well, all of them. We especially do well with Tub Tunes,” Patricia Masing, co-owner of Tree Town Toys in Ann Arbor, Mich., told TDmonthly in March 2008.
— Five of 37 retailers cited the Tub Tunes' line as a hot-selling bath toy with customers in spring 2007. Thirty percent of 40 retailers who spoke with TDmonthly in March 2008 singled out this item as the best-selling bath toy in their stores.
— Want this? As of 05/06/2011, this product was available for purchase at Hardware Toys. 4/10/2007 (MSRP: $24.99; Age: 3 and Up)

Rub a Dub Draw in the Tub by ALEX BRANDS

Colorful works of art can be created on someone’s tummy, or on the bathtub wall, using this set of six bathtub crayons. A duck-shaped sponge is provided to erase the “canvas” and start anew. “This is one of our top bath items,” said Elin Kabo, director of communications for Alex.
— Cons: May stain some tubs (especially tile grout). Crayons disintegrate quickly in the water. One user said the crayons were much smaller than indicated on the package, due to being encased in a misleadingly long plastic holder. (Reviews from Amazon.com)
— Ten of 64 retailers named the Bathtub Crayons from Alex as a top-selling bath item, citing monthly unit sales of anywhere from six to 80 per month, in March 2009. Nearly 70 percent of the respondents named the Alex line in general, or a particular product from the range, when discussing best-selling bath toys.
— Eight of 39 retailers named this product a best-selling bath item in March 2010. Nearly 67 percent of retailers cited Alex as their No. 1 manufacturer for bath toys.
— Want this? As of 05/06/2011, this product was available for purchase at Doodlehopper 4 Kids.  7/15/2005 (MSRP: $6.49; Age: 2 and Up)