Action Figure Sales are Up - But Not in Specialty

By Justina Huddleston
September 2013
With additional reporting from Brenda Ruggiero

As we reported last month, The NPD Group has found that action figures are one of the only toy categories showing significant growth in 2013.

What does this mean for specialty toy stores?

Ali Bladwin from Landi's Labrynth, a specialty toy and game store  in Los Angeles, Cali., told TDmonthly that their best-selling action figures are for younger kids. "Captain America is the most popular, followed by Iron Man, then Spiderman," she said.

However, many of her peers in the specialty market — six of the nine we recently spoke with — choose not to sell action figures at all.

We have noticed a reluctance among specialty retailers when it comes to selling licensed products (with the exception of LEGO sets), with many of them noting that most popular licenses belong to mass-market manufacturers whose minimum quantities are so large that it's not feasible for an independent store to carry their products.

So how can specialty toy stores in this predicament try to benefit from the current boom in action figure sales?

Joe Beradoni Jr., owner of Pun's Toys in Bryn Mawr, Pa., says that at their store, "If someone asks for action figures, I lead them to either our Playmobil or Papo sections."

These alternative options still give kids what they want — pretend play figures with an intriguing background that helps set the tone for action-packed, immersive pretend play. Instead of superheroes, both of these brands offer daring knights, pirates, and fearsome animals that foster imaginative play that is just as exciting as with their licensed counterparts.

If your store is interested in stocking up with some of these exciting alternative action figures for the holiday season, take a look at the products below.

This knight action figure wears a suit of silver armor decorated with a unicorn emblem. The set includes a horse figure with matching armor.
— Eight percent of 38 retailers told TDmonthly in July 2010 that Papo figures are a top-selling collectible. 8/9/2010 (MSRP: $11.55)

With the Playmobil Soldiers Fort with Dungeon kids can help the soldiers defend their fort, which includes a prison drop door, dungeon, and vault. Located on the door to the vault is a magic coin that can be used on the Pirate Adventure Island. Set also includes three figures, working cannon, and other accessories. Dimensions: 20.1 x 18.9 x 9.3 inches (L x W x H). Recommended for ages four to ten.
— Sue Hottel, manager of No Kidding (aka Sand Castle Toys Inc) in Mattapoisett, Mass., told TDmonthly in a May 2014 survey that Playmobil was one of the top-2 best-selling construction toys in the store. 11/9/2012 (MSRP: $68.00; Age: 4 and Up) 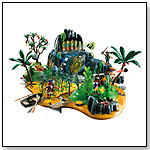 Avast ye, matey; there's hidden treasure in this Playmobil Pirate Adventure Island. Find the 5 magic coins and use them to unlock a secret cave where the treasure lies hidden. Sound & light effects activate when the cave is opened. But beware of danger. The island also has hidden stairs and falling rocks. Set contains 210 pieces, including 3 figures, exotic creatures, rowboat, working cannon, and many other accessories. There's even a colorful poster for little buccaneers to put on their wall.
Awards: 2013 TDmonthly Seal of Approval 10/24/2012 (MSRP: $119.99; Age: 4 to 10) 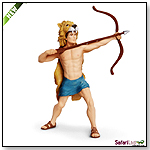 Dressed in lion skin with his arrow strung, aimed and ready, the fearless 2013 Hercules from Safari Ltd® is ready to take on the most challenging of tasks.This hand painted replica measures 3.75” W x 5.25” H (9.75 x 13.25 cm) and is suitable for ages 3 and up. All Safari Ltd® products are 100% guaranteed and lead free to ensure children’s safety. Visit safariltd.com to explore educational information in five languages and to view and purchase Safari Ltd® 2013 introductions and all other products. 5/29/2013 (MSRP: $9.99)

Join Drake and his Thunder Dragon on electrifying adventures as they soar through the dark clouds of stormy nights. This hand painted replica measures 8” L x 6.25” W x 3.75” H (20.5 x 15.75 x 9.75 cm) and is suitable for ages 4 and up. All Safari Ltd® products are 100% guaranteed and lead free to ensure children’s safety. Visit www.safariltd.com to explore educational information in five languages and to view and purchase Safari Ltd® 2013 introductions and all other products. Launch date: 2013. 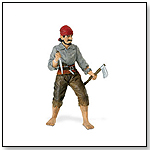 Our action packed swashbucklers will delight the imagination of any young matey. Sculpted by a leading American character sculptor, our pirates are so life-like that they will transport kids back to the days of pirate ships and sunken treasures. 11/29/2012 (MSRP: $5.99; Age: 3 and Up)

This young helper with delicate yellow wings is a real addition to the elf wedding. Harp Elf is a talented musician and will gently strum the  harp resting on her knees to create beautiful music for the bride and groom’s first dance. She will play late into the night providing the perfect atmosphere for a Bayala celebration. Launch date: May 2011.
— Erika Evers, owner of Dancing Bear Toys Limited in Hendersonville, N.C., told TDmonthly in a Summer 2011 survey that she sells 5 Schleich figures each day. She sites the figures' "museum-quality resin," and the store's large display, as reasons for their popularity. 8/22/2011 (MSRP: $7.99; Age: 5 and Up)

Children can immerse themselves into an imaginary world of fantasy with the Bayala collection from Schleich, complete with elves, dragons, Pegasus and unicorns. Each World of Bayala character is designed with its own animal companion. Thin tapered wings enable this duo from the new Arelan tribe to fly at high speeds and to change direction rapidly. The figure stands tall holding his falcon on his arm, showing off its detailed feathers. (