Almost half of the retailers surveyed by TDmonthly Magazine in May 2014 told us that they carry little to no licensed toys. Those that did, however, reported lots of success with offerings from LEGO. Sesame Street was another license that did well for these specialty store owners. You can see all of the products they named top-10 licensed toys below. 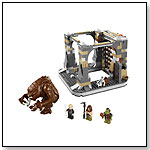 Build a famous scene from Star Wars™: Episode VI Return of the Jedi™ with this stackable set. Jedi Master Luke Skywalker is trapped in the Rancor™ Pit beneath Jabba the Hutt’s Palace and must escape. Look for a way out before the gate lifts and the mighty rancor makes an entrance. Battle the rancor with the bone before he eats the Gammorrean guard. Then, find the hidden compartment with a secret key or drop the gate on the space beast before it’s too late. Combine with LEGO® Star Wars 9516 Jabba’s Palace for a stackable scene with a trapdoor into the Rancor Pit! Includes rancor, skeleton and 3 minifigures: Luke Skywalker, Malakili and Gammorrean Guard.
— In a May 2014 survey, four out of 11 retailers told TDmonthly that Lego was their best-selling line of licensed toys. 12/18/2012 (MSRP: $59.99; Age: 8 to 14)

Unscramble the stickers to create surprise pictures of everyone's favorite Frozen sisters, Anna and Elsa. Place the numbered stickers on a numbered grid to complete the pictures.
Book Includes a booklet of 8 colorful jumbled sticker puzzles, book of 8 numbered puzzle grids and 240 stickers.
— In a May 2014 survey Suzi McMullen, manager of Doodlehopper 4 Kids in Falls Church, Va., told TDmonthly that they sell 1 Frozen toy per hour, making it the store's best-selling license.
— In a August 2014 survey, two out of 10 retailers told TDmonthly that Frozen licensed products were their best-selling toys. 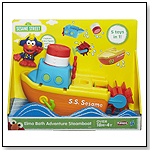 Take off on a watery adventure with the Elmo Bath Adventure Steamboat! There are 5 different toys in one 1 for unlimited, imaginative bath-time play. Includes boat toy (4 pieces) and 1 Captain Elmo figure.
— In a May 2014 survey, two out of 11 retailers told TDmonthly that Sesame Street was their best-selling license. 5/19/2014 (MSRP: $16.99)

Aurora grows its diverse collection of must-have My Little Pony plush with stylish new designs including characters in a "seated" pose (a first for My Little Pony plush in the gift market) as well as a new keychain assortment where each pony includes a clip for hanging just about anywhere. The popular ponies with personality are based on characters from the hit animated series MY LITTLE PONY FRIENDSHIP IS MAGIC, including PINKIE PIE, RAINBOW DASH, APPLEJACK, RARITY, FLUTTERSHY and for the first time ever, PRINCESS TWILIGHT SPARKLE. (MSRP: $5 for keychain; MSRP: $20 for "seated" style)
— Gladys Griffin, owner of Main Street Toy Shop in Columbus, Ga., told TDmonthly in a January 2014 survey that My Little Pony plush from Aurora was a best-seller. "They were just out of here in no time," she said of a recent, fast-selling order.
— Gary Green, owner of Toy Box of Asheville Inc in Asheville, N.C., told TDmonthly in a May 2014 survey that Aurora's My Little Pony was their best-selling line of licensed toys.

Aurora will initially release 18 My Little Pony styles with suggested retail prices ranging from $15-$20. Twelve small ponies each with a personalized carrying bag (Aurora’s popular Fancy Pals™ style; size: 6”) and six soft plush ponies (just over 10 inches in size) highlight the line. My Little Pony plush will be available for purchase in both the United States & Canada in Aurora’s retail channel of more than 25,000 specialty stores and gift shops as well as online at http://shop.auroragift.com. For more information, visit http://auroragift.com, email info@auroragift.com or call 888-287-6722.
— Gary Green, owner of Toy Box of Asheville Inc in Asheville, N.C., told TDmonthly in a May 2014 survey that Aurora's My Little Pony was their best-selling line of licensed toys. 2/26/2013 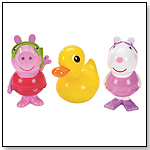 Fisher-Price Peppa Pig Peppa, Suzy Sheep and Ducky Bath Squirters
Make a splash in the bath with Peppa, Suzy Sheep and their ducky friend! Just fill these bath squirters with water & give them a squeeze! Ages 3+
— In a May 2014 survey Sherri Stone, manager of Toys & Co. in Charlotte, N.C., told TDmonthly that Peppa the Pig is their store's best-selling license. They sell 12-18 Peppa the Pig products each month. 5/19/2014 (MSRP: $11.99; Age: 3 and Up) 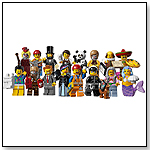 With 16 special minifigures featured in The LEGO® Movie, this is one LEGO Minifigures collection as you've never seen it before! There's Emmet, with his exclusive construction helmet, Wild West Wyldstyle, the Master Builder and the rest of the cast: President Business, Scribble-Face Bad Cop, Marsha Queen of the Mermaids, Abraham Lincoln, Velma Staplebot, William Shakespeare, Panda Guy, Gail the Construction Worker, Mrs. Scratchen-Post, Wiley Fusebot, Calamity Drone, Larry the Barista, Taco Tuesday Guy and "Where are my pants"? Guy. Each minifigure comes in a sealed "mystery" bag with its own special accessories, display plate and collector's leaflet. Buy a bag, open it up and see which one you get!
— Kelly Ratoff, owner of Kennebunk Toy Company in Kennebunk, Maine, told TDmonthly in a May 2014 survey that LEGO Movie Minifigures were her store's best-selling licensed toys. 5/19/2014 (MSRP: $3.99) 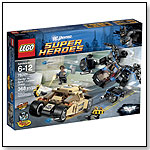 High above Gotham City, Batman™ spots Bane in the armored Tumbler chasing Police Commissioner Gordon. Bust through the road barricades in the Bane Tumbler with hidden dual flick missiles and flame exhaust. Then swoop down from the skies in The Bat and winch the commissioner to safety with the rescue rope before Bane reaches him. Includes 3 minifigures: Batman, Bane and Police Commissioner Gordon with assorted weapons.
— In a May 2014 survey, four out of 11 retailers told TDmonthly that Lego was their best-selling line of licensed toys. 12/18/2012 (MSRP: $39.99; Age: 6 to 12)