STICKMAN STEW® Sticks It to Bullies (But Kindly!)

Cross Between Gumby and Mr. Rogers Is Ready to Make Big Changes in the World

By Alison Marek
July 2014
Bullies, your time has passed! Vampires and other beasts, you may be immortal, but you're irrelevant now. There's a new wave of compassion sweeping the toy industry, and it's being led by a three-dimensional and quite compassionate stick figure. 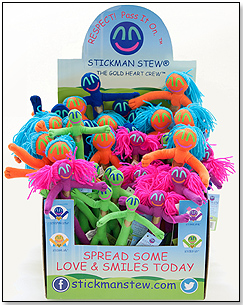 Stick figures are the first creative expression children use to depict friends, family and the world around them.

Who is this universal figure who's only now made it to the toy aisles of America? Introducing STICKMAN STEW®, a 13" tall plush, posable toy that's a cross between Gumby and Mr. Rogers. STICKMAN STEW is bendable like the loveable icon Gumby with the morals and good-natured neighborliness of Mr. Rogers. 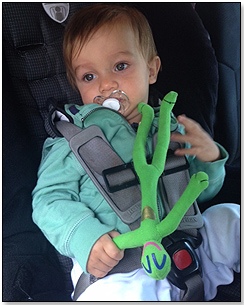 STICKMAN STEW's mission is to inspire the STEWardship of love and respect for kids all over the world. STICKMAN STEW believes that if kids are respectful, they'll likely be more successful, too.

His mission is so important, STICKMAN STEW has a band of helpers — THE GOLD HEART CREW®, comprising his stick friends, STICKKID SID®, STICKGAL SAL® and STICKGIRL SHIRL®. Jane Guinn, founder and inventor of STICKMAN STEW, tested hundreds of characters to carry forth her mission to make the world a friendlier, more respectful place. She finally settled on the stickman because of its familiarity to children. She gave him a twist by adding a big smile and an even bigger golden heart to emphasize the most important attribute all humans share: a heart. 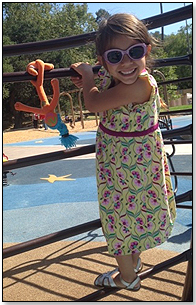 "We wanted to create a simple toy that would speak to all children," said Jane. "Stickman Stew reminds us to respect life, yourself, each other, and the world in which we live. His tagline says it all, 'Respect. Pass it on!"'

Jack Goldenberg, a veteran toy and children's marketer, first heard about Stickman Stew when he was walking the aisles of Toy Fair 2014. He contacted Jane to help spearhead the marketing campaign. He insists Crypt Kiddies, Living Dead Dolls and other ghoulish and violent toys have run through their cycle. 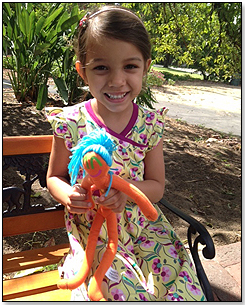 "Nielsen polls show consumers are now looking for products that serve our planet and society," said Jack. "Stickman Stew is right on target with his non-bullying message. He encourages kids to accept themselves and others just as they are."

Jane pointed to a 2014 Harris poll of 2,025 adults that demonstrated the decline of respect for teachers in our schools.

"This is another indication of the need for Stickman Stew's message of stewardship," she said.

Little Guy Will Be "BIG!"

If anybody should know what the next big thing for kids will be, Goldenberg is highly qualified. He launched the Happy Meal for McDonald's, helped make Cabbage Patch Kids dolls and Pop Rocks candy household words, and created the Pee-wee Herman toy line for Matchbox. He has worked as Associate Creative Director, marketing Transformers, GI Joe, My Little Pony and many more industry staples. 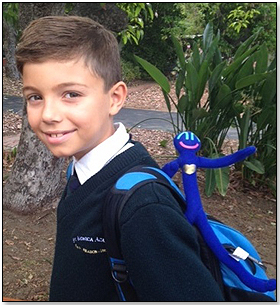 Goldenberg is especially excited that STICKMAN STEW's appeal is not limited to young girls and doll or plush lovers.

"Boys love Stickman Stew, too," he said. "They play with him, clip him to their backpacks, even sleep with him at night."

- STICKMAN STEW: a peaceful and gentle soul who spreads respect and love everywhere he goes and encourages kids to be kind, thoughtful to others.

- STICKGAL SAL: a warm and caring gal. She accepts people for who they are and always tries to live by The Golden Rule.

- STICKID SID: a prankster who loves to make people laugh. But like other members of the GOLD HEART CREW, he cares about the impression he makes and is kind to everyone he meets.

- STICKGIRL SHIRL: a quirky and curious girl who believes in herself and encourages others to do great things. She's a junior environmentalist at heart who wants everyone to take care of Planet Earth.

Each of the four characters has a storybook-like hangtag showing the many ways they respect themselves, each other and the world we live in.

"Stickman Stew and the Gold Heart Crew will offer a conversation platform to introduce the concept of respect and provide a trigger to help build this character trait among youth," said Jane.

Stickman Stew® is a peaceful and gentle soul who helps his friends be the most kind they can be. He spreads respect and love everywhere he goes. Stew loves to sing karaoke and dance. 5/27/2014

Stickgal Sal™ is a warm and caring gal. She’s a good friend who will always be there to hold your hand. Sal loves to give hugs and read people’s fortunes. 5/27/2014

Stickkid Sid™ is a prankster who loves to play jokes and make you laugh. His big imagination and hijinks can get him into trouble at times. Sid often hides in small spaces where he accidentally falls asleep. 5/27/2014

Stickgirl Shirl™ is a quirky and curious girl who loves to daydream and encourages others to do great things. Shirl is always wishing on shooting stars and talking to furry animals. 5/27/2014