Action figures aren't huge sellers in specialty, according to half the retailers TDmonthly Magazine interviewed in August 2014. However, for some, these toys do generate sales. You can see the Top-5 Most-Wanted Action Figures below. 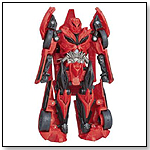 Decepticon Stinger is back, and he's tougher than ever! This Decepticon Stinger changer fights his Autobot enemies every time he can, and he converts so fast they'll never be able to keep up. Press him to convert him from mighty robot mode to speedy sports car mode in just 1 step, then convert him back again when the battle calls for it! Autobots will never be able to handle your fast-changing Decepticon Stinger figure!
— In a August 2014 survey, three out of 10 retailers told TDmonthly that Transformers were their best-selling action toys. 8/28/2014 (MSRP: $9.99; Age: 5 and Up) 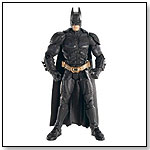 Batman The Dark Knight Rises Movie Masters Collector Figures: Based on the hit new Batman film, The Dark Knight Rises. The Dark Knight Rises comes to life with Movie Masters figures, sculpted with superior accuracy and details inspired by the film. Eight of the movie’s biggest characters have been meticulously crafted to capture and create fully articulated figures in six" scale. Ready to be the biggest star in any fan's collection, each figure includes a Collect and Connect piece that can be combined with other pieces to create a light-up and wall-projectable Bat Signal. Purchase eight collectible figures throughout the year to complete the Bat Signal.
— In a August 2014 survey, Sunni, manager of Doodlehopper 4 Kids in Falls Church, Va., told TDmonthly that Batman is one of their best-selling Action Figures. 7/16/2012 (MSRP: $16.99; Age: 3 and Up)

These three knights fight under the red dragon insignia. Their black, red and silver accessories include shields, helmets, swords and more.
— In an August 2014 survey David Stelzer, owner of Shananigans Toy Shop in Baltimore, Md., told TDmonthly that "Playmobil usually outsells everything else in the store," and Playmobil makes the store's best-selling action figures. 8/28/2014 (MSRP: $10.99)