From horse masks to whoopee cushions, novelty toys can add some fun to any store. TDmonthly Magazine interviewed retailers in September 2014 to find out just which novelty toys are making the biggest waves specialty. Check out the top-sellers below.

Connect these speakers to computers, iPhones, iPods, tablets, Android, game players & more. Multi-colored jets of water dance to the volume and beat of the music. That, added to the 4 multicolored LEDs, creates an incredible light and water show. The speakers stand 9" tall and are compatible with any audio device that has a 3.5mm audio jack connection. They are lightweight and portable. All connection cords are included.
— In a August 2014 survey, Stan Giliberto, owner of Over the Rainbow Toys in Glastonbury, Conn., told TDmonthly that this is one of their best-selling toys. "It's good for older kids who are starting to age out of toy stores," he explained.
— In a September 2014 survey, Beth Snyder, manager of Growing Tree Toys in State College, Pa., told TDmonthly that these speakers are one of the store's best-selling novelty items.

This latex mask with a realistic fur mane fits most adult heads and comes with an illustrated tag.
— In a September 2014 survey, David Campbell, owner of Amazing Toys in Great Falls, Mont., told TDmonthly this horse mask, and other masks from Accoutrements, are the store's best-selling novelty items. "It's become a big deal on the internet," he explained.
— Peg Scholtes, owner of Capitol Kids LTD in Madison, Wis., told TDmonthly in a December 2014 interview that the Horse Mask from Accoutrements is one of their best-selling Halloween toys. 5/17/2010 (MSRP: $24.95; Age: 8 and Up)

A delightful sticker book with over 500 colorful stickers to complete the summery scenes. There's a summer flower garden to decorate with buzzing insects, pirate mice to add to a treasure ship, and stickers for beaches, boats, airports, picnics and other summer scenes. An amusing activity with lots to talk about on journeys and long summer days.
— In an April 2012 survey about best selling travel toys, three out of 11 retailers said that sticker books from Usborne were their best sellers.
— In a September 2014 survey, Kai Rady, owner of Shenanigans Inc in Charlottesville, Va., told TDmonthly that their store sells "hundreds and hundreds" of these sticker books each month, making them one of the store's best-selling novelty items. 4/6/2012 (MSRP: $5.99; Age: 3 and Up) 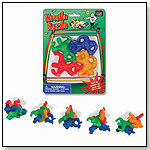 Comes with 4 wrestlers on a card. Twist them together and watch them fight their way free with their best moves. Wild wrestling action!
— In a September 2014 survey, Melissa Pennille, co-owner of Teaching Toys & Books in Tacoma, Wash., told TDmonthly that Wrestle Razzle was one of the store's best-selling novelty toys. 9/29/2014