It can be hard to keep kids coming to your store as they get older, but the tween toys below just might do the trick. TDmonthly interviewed specialty retailers to find out about the products that kept older kids coming back to their stores time and again. You can check out their top-10 best-selling tween toys below, then decide if any of them could be a good draw for tweens in your community.
*No manufacturer paid to be included in this list. All products listed were designated by editorial staff without regard to the company's relationship with TOYDIRECTORY.com/TDmonthly Magazine. 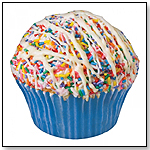 A comfy and trendy way to carry this bag with the adjustable, long strap is over the shoulder and across to the other side. The fashionable, designer fabrics work beautifully with the profusion of sparkles to create a trendy icon, such a butterfly, heart, owl, wildcat, or flower. The jeweled designs make the bag literally shine! There are 11 styles this year.
— Priscilla Moore, owner of Mr. Fub’s Party/Toys and More in Yellow Springs, Ohio, told TDmonthly in an October 2014 survey that purses from Douglas were their store's best-selling brand of jewelry and accessories. 10/29/2014 (MSRP: $18.00)

You don’t have to be an engineer to create with nanoblock. With these micro-sized building blocks, 3D structures are constructed like never before. Watch as the beautiful Lady Liberty takes shape with over 700 assorted size and colored pieces. Includes detailed color instructions. Launch date: September 2012.
— As of 10/01/2012 this product had 5 out of 5 stars from 1 review on Amazon.com.
— Joe Berardoni Jr., owner of Puns Toys in Bryn Mawr, Pa., told TDmonthly in a Fall 2012 survey that nanoblocks are one of their top selling hobby items.
— Rebecca Goblish, owner of Picayune Toys in Dunwoody, Ga., told TDmonthly in a May 2013 survey that for older kids, nanoblocks were her best-selling construction toy.
Awards: 2015 TDmonthly Magazine Top Toy Award 9/7/2012 (MSRP: $40.00; Age: 8 and Up) 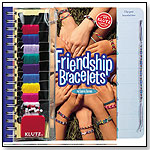 Clear directions for ten different kinds of bracelets, with all the colorful floss and beads needed to make them. A built-in clipboard provides the ideal work surface for this craft.
— Mike DiAndrea, manager of Hardware Toys in Paoli, Pa., told TDmonthly in October 2011 that they sell about 8 of these kits each month, making them a best seller in the jewelry and accessories category.
— In a January 2012 survey about arts and crafts toys, two out of 13 retailers said that Klutz's Friendship Bracelets book was a best selling toy.
— In a December 2013 survey three out of 10 retailers said that Klutz made their best-selling books. 10/12/2011 (MSRP: $16.95; Age: 8 and Up)